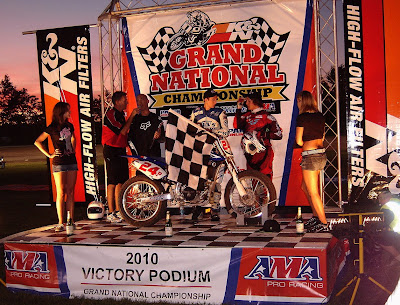 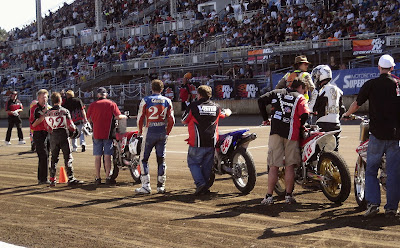 Rider intros are underway at the Springfield Mile round of the 2010 AMA Pro Motorcycle Superstore.com Pro Singles Series on September 5. Eventual event winner Michael Toon is being introduced to the the crowd by AMA track announcer Barry Boone as his #22L Honda sponsored by Price Truck Line/Kennedy Tires/Woody Kyle Racing is held at the ready for him.
Toon was victorious on the day, beating out #81C Zakk Palmer by .020 seconds with 2009 Pro Single Champ coming home 3rd on the day just .051 seconds back from Toon. Toon finished the year 9th in the Pro Singles Championship with 104 points.
Behind Toon is eventual 2010 AMA Pro Motorcycle Superstore.com Pro Singles Champion Jeff Carver alongside his #24P Van's Yamaha. Carver came home 5th at Springfield, just .335 seconds behind winner Toon. The Champ also had another 5th place finish on the year the night before on the Springfield Rodeo Arena Short Track. Carver was awarded his ceremonial #1 plate for winning the championship at the season ending banquet, and was also awarded National #23 from Kevin Atherton, which he will wear in the 2011 AMA Pro Flat Track Grand National Championship Series.
Rider #2oT is Mikey Labelle, alongside his Honda sponsored by WeirBach Racing/General Engineering/Barnett Clutches. Labelle finished 4th on the day at Springfield just .122 seconds back from winner Toon. He also won his first-ever AMA Pro Flat Track Pro Singles event at the season ending round in Prescott Valley, to finish the year 5th in the season ending standings with 139 points. He dedicated that win to rider Jesse Phibbs, who died the week before from injuries sustained at the Lucas Oil Indy Mile on August 28.
These Pro Singles events are serious business with multiple-bike battles and close racing at it's VERY best, doing a great job to highlight the up-and-comers into the great sport of AMA Flat Track Racing. You can tell from the time differences shown in the few shots I have posted and results shown that they are a pretty exciting affair, to say the least. AMA Flat Track has done a super job of using this series to showcase it's future in racing, and you always see the very best of racing with these young men wringing the heck out the 450s, especially on the mile tracks!
------------------------------------------------------------------------------------------------- 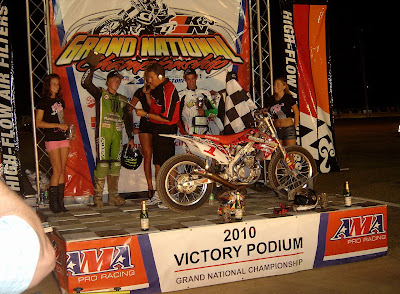 With the 2010 AMA Pro Motorcycle Superstore.com Pro Singles Championship having been decided before the season ending round at Yavapai Downs, Jeffrey Carver, Jr. ended up winning the title over 2009 Pro Single Champion Brad Baker by a margin of 26 points, 293-267 in the final tally. Both of these fine young men will be moving up to the Expert GNC Class for the 2011 season, showing that the current ladder/growing system for the sport is working quite well in bringing new talent into the AMA Pro Flat Track Grand National Championship Series. Between these two hard chargers, they won 9 of 16 events on the schedule (Carver's 5 to Baker's 4) and accounted for 22 podium spots on the year as well.

The AMA Pro Singles Class was brought in new for the 2009 season, taking the place of the old Pro Expert Twins Class that preceded it. Needless to say this change has been instrumental in bringing AMA Flat Track fans some of the most exciting race action that AMA Flat Track has had to offer over the years, and even decades. The racing is as close as you can get, and some of the most exciting that each event has to offer. All entrants race DTX production-based 450s so it makes for some VERY close action and thrills.
Personally, one of THE best races of the year was watching eventual champ Jeff Carver start on the back row (due to a false start) in his heat race at Indy in August to power his way around the outside of everyone to win in only six laps. And then to come off the back row again to finish the main in 3rd place, only because I think not only he was worn out, but so was the rear tire on his #24P Van's Yamaha.

Some of the best racing on the year came out of the Pro Singles races I witnessed. And the talent pool looked great this year, and very promising for the 2011 season as well.

This is AMA Pro Flat Track's official release on the year end banquet awards. 2010 AMA Pro Motorcycle Superstore.com Pro Singles Champion Jeff Carver is featured as he gets his ceremonial #1 plate, and also is awarded National #23 for 2011 in the AMA Pro Flat Track Grand National Championship Series. Kevin Atherton was on hand to award him his 'old' number. Carver will get to wear a 'solid' National number due to the AMA awarding those to previous champions in the feeder/
growing series of the Pro Singles Championship:

Ultimate Motorcycling.com has this version of the AMA PR on the Pro Singles awards at the year end banquet in Prescott Valley, along with a couple of good pics as well:

Tyler Porter over at Fight For Dirt Track has this great interview with 2010 AMA Pro Motorcycle Superstore.com Pro Singles Champion Jeff Carver, Jr. from after the season ending race in Prescott Valley:

Tyler also has this interview with Mikey Labelle, who got his break out first-time win as an AMA Pro Singles rider at Prescott Valley. Labelle, who finished 5th in the 2010 AMA Pro Motorcycle Superstore.com Pro Singles Championship with 139 points, dedicated his Yavapai Downs Mile win to Jesse Phibbs. Jesse was the Pro Singles rider from Canada (who less than a few hours before the crash had won his first pole at the Lucas Oil Indy Mile event) that was severely injured on the first lap of the first Pro Singles heat race at Indy on August 28, and who several weeks later succumbed to his numerous injuries:

Here are some great shots over at Poppa Wheelie's super site of first-time Pro Singles winner Mikey Labelle at the Yavapai Downs Mile on October 9: