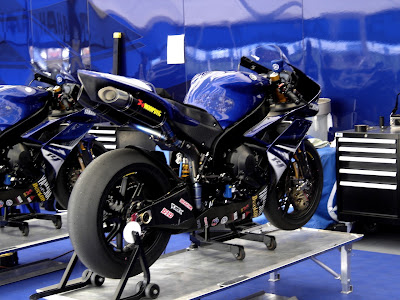 Anyway, Yamaha USA gifted an ex-Eric Bostrom '08 Graves Motorsports R1 Superbike to Jay Leno last night in part of the celebrations leading up to the Laguna Seca MotoGP event this weekend. Of course, all the BIG stars were there....KR, Sr., Eddie Lawson, Ben Spies, Colin Edwards......oh, and of course, Jay Leno. Sounds like a wayyyyyyyyyy cool time. Besides getting to put an ex-AMA (and REAL fire-breathing) Superbike in your garage and collection.

Read it and weep here thanks to the release and the great people over at Dean Adams' bitchin SuperBikePlanet.com:


And you can check out some pics from the guest list, thanks to Dean Adams, right here:

And before you have to crawl back under that rock again, go here....Jay's garage: