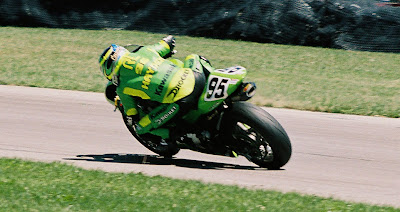 Roger Lee Hayden, the youngest of the Hayden Clan from Owensboro, KY., was officially announced yesterday as the fill in replacement rider for the LCR Honda MotoGP team at Laguna this upcoming weekend. Regular rider Randy DePuniet was knocked out of action for the next 6-8 weeks +/- during the MotoGP race in Germany on Sunday when involved in a three bike crash during the MotoGP race and suffered a broken leg. As a result, Roger will get a chance to step in and race at a track he is familiar with and on a competitive (DePuniet was sitting in the 6th spot in the MotoGP Championship prior to the crash) satellite Honda-factory supported team. Roger last rode at MotoGP machine at Laguna in '07 for the Kawasaki effort with top ten results.

Roger had a chance to talk to the folks at MotorcycleNews.com across the pond about his upcoming ride and you can read about that right here and see why RLH95 is so pumped for this home race for the Hayden clan:

Here is the official release courtesy of the great team at SuperBikePlanet.com concerning LCR's signing of Roger to the team's efforts for the Monterey round this weekend: