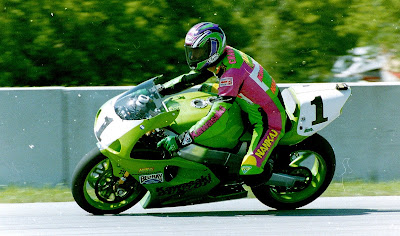 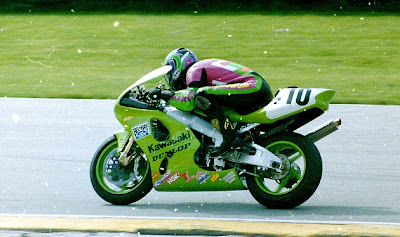 Doug Chandler rips it out of Canada Corner at Road America during a practice session in June of 1999. While contesting the AMA Superbike Championship on the Muzzy Kawasaki ZX-7R, Doug and Rob Muzzy helped set the bar for professionalism on and off the track. Working with legendary tuners that included Gary Medley and the late Merlyn Plumlee, Chandler and Team Muzzy put together a string of wins and championships that went from '89-'90 and '96-'99. Doug also raced for Kawasaki in '00-'02 after they took the superbike program in-house.
Chandler also contested the AMA 600 and 750 Supersport Championships throughout the same years at different times, and from '91-'94 was in Europe contesting the 500CC World Championship for Yamaha, Suzuki and Cagiva. Upon his return to the States in '95 Doug hooked up with the then-new H-D Factory VR1000 Superbike team, but injuries suffered trying to develop the VR while racing kept him out of action for some of the year.
Back before the mid-'80s, when AMA Racing split the road race and flat track championships apart, AMA Pro Racing in 'Class C' competition as it was originally run, included running dirt track races on four different types of tracks--mile, 1/2 mile, short track, and TT (which includes a jump and where the bikes are also equipped with front brakes)--and running road racing events. To win one race at all five types of tracks incorporated in Class C racing is known as a 'Grand Slam.' There are only four men to have won the prestigious and extremely hard--especially now since the split--to attain Grand Slam. Those four men are Dick Mann, Kenny Roberts, Bubba Shobert and Doug Chandler. Nicky Hayden is about the only active racer that could possibly add his name to that list, but the chances of Ducati-or anyone in MotoGP, for that matter-allowing a multi-million dollar rider to try to contest a mile dirt track race are pretty slim and none. Doug Chandler resides in some pretty tight company.
-------------------------------------------------------------------------------------------------

Former 3-Time AMA Superbike Champion Doug Chandler, who lives pretty much within ear-shot of Laguna Seca, was interviewed the week before this last weekend's Red Bull Monterey MotoGP and AMA Superbike event by one of the local sports writers and chimed in on his thoughts on racing and racing as it is now. Always one of the more approachable riders at the track, Chandler was known for his ability to bring it home and to set up a bike to be able TO bring it home.

Winning the AMA Superbike Championship in '90, '96-'97 while riding for Rob Muzzy's Kawasaki powerhouse, Chandler was one of the go-to guys of the day and along with Scott Russell, Fred Merkel, Steve Crevier and Tommy Hayden (among others) helped to make Muzzy's team the one to beat for well over a decade. The Salinas, CA. resident is one of the most versatile of this bunch, honing his abilities for Team Honda on the pro dirt track scene and then on the road race courses in the early-mid '80s. By the time Chandler hooked up with Muzzy the ability and the attitude were there, but putting that on Muzzy's Kawasakis uncorked it all once they hit the track.

Doug Chandler is what racing is and always should be and he brought a level of professionalism and attitude to the track as well as the paddock that was welcomed by all. But beneath those boyish grins was a mad man with steely eyes who could whip a throttle on a bike and that could make a grown man cry. But it was always a pleasure to see him do it and to be able to witness what he did for AMA Superbike and for the fans and to be able to talk with him and bore him to death with all the pictures he autographed for me over the years.

Thanks for all the memories, Doug! You made it fun to be a witness to it all.


Here's Doug's spin on the current state of racing, as well as racing in the States, thanks to The Monterey Herald in Monterey, CA.: