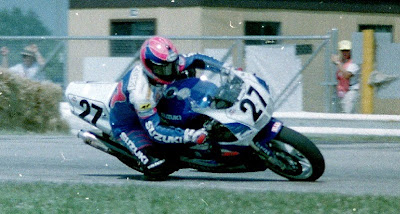 A fine piece of AMA and U.S. Road Racing history is currently for sale on eBay. This would make a great addition to anyone's collection. Maybe in glass for an end table or mantle piece for the fireplace? Of course, it would have to be a pretty good size fireplace. I'm just sayin'...................


CycleNews.com reports that Flyin' Fred Merkel's 1995 Yoshimura Suzuki GSX-R750 Superbike is for sale by the former 3-Time AMA Superbike and 2-Time World Superbike Champion. Bids start at $35K and you still have time to get on the bandwagon with a racing machine for the ages and ridden by one of the true champions, icons, and spokespersons of the sport.


Here's the story as posted by CycleNews.com I found this morning:
http://www.cyclenews.com/articles/road-racing/2010/07/07/merkel-selling-his-suzuki