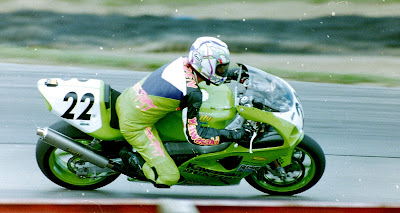 Tommy Hayden has come a very long way since he first started riding in the AMA Superbike class for Rob Muzzy's Kawasaki team back in '97, where he won '97 AMA Superbike Rookie of the Year Honors. After leaving Muzzy's team at the end of the '98 season as shown in qualifying at Mid Ohio above, he rode for the Yamaha Factory team, back to Kawasaki's Factory in-house effort, and then landing with the powerhouse Yoshimura Rockstar Makita Suzuki team for the '07 season where he has steadily improved since that time. Tommy Gun took the '04 and '05 AMA 600 Supersport Championships and sat out the Superbike class for several years while riding Supersport and Superstock machinery. He returned to the Superbike class with Yoshimura in 2007 and this year won his first premier class event earlier in the season. He now has three premier class wins to his credit after all these years. The hard work HAS paid off for the eldest of the Hayden clan!
Today's win at Mid Ohio moves him to within 4 points of the championship hunt behind series leader Josh Hayes, whom Hayden beat today by .194 seconds, for his third win and ninth podium on the season. The series moves on to Laguna Seca next weekend paired up with the Red Bull MotoGP American round in Monterey, CA.
-------------------------------------------------------------------------------------------------
Yoshimura Rockstar Makita Suzuki-mounted Tommy Hayden emerged victorious today over series rival Josh Hayes in the second race of the Honda Super Cycle Weekend presented by Dunlop Tires at Mid Ohio. Leading 18 of 21 laps at the stripe on his GSX-R1000, Hayden held off series points leader Josh Hayes on the #4 Graves Motorsports Yamaha YZF-R1 by just .194 seconds at the stripe. Local and hometown hero Larry Pegram on the #72 Pegram Racing Foremost Insurance Ducati 1098R rounded out the podium 2.97 seconds back from Hayden. Ben Bostrom on the #155 Pat Clark Motorsports Yamaha finished fourth and Brett McCormick, the Canadian sensation filling in for the injured Aaron Yates on the #23 Michael Jordan Motorsports Suzuki, had his best finish of the season in fifth.