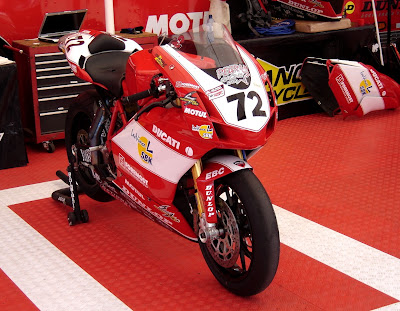 Larry Pegram, who has raced just about everything imaginable in the AMA Pro Racing series and for what seems like forever, is in the middle of a great run this year after having a stellar year back in the premier AMA Superbike class last year. After today's provisional qualifying session at Mid Ohio, Pegram sits in the 3rd spot on the grid for the AMA Superbike races with his Foremost Insurance Ducati 1098R just .542 seconds behind race and series front runners Tommy Hayden and Josh Hayes. Go Larry!

For this weekend, the Pegram Racing team is offering an 'in view' live webcam of the goings on in their garage at Mid Ohio. (it requires Apple Quicktime plug-in to view)

So while you are checking out the Live Timing and Scoring feeds from the races outside Lexington, you can have a look at what Larry and the Foremost Ducati team are up to.

Check it out here--and thanks to Larry and the team for the live feed. You guys rock as usual!