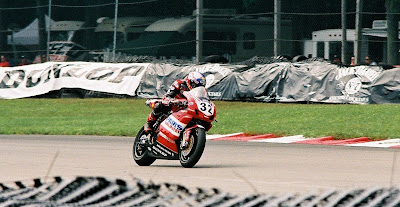 The old guard treated the new guard to a sampling of what has been, and what COULD be again today at the Laguna Seca round of the AMA Superbike Championship, as '98 AMA Superbike Champ (and '08 AMA Supersport Champ) Ben Bostrom took his #155 Pat Clark Motorsports Yamaha YZF-R1 to the top of the box over Graves Yamaha's Josh Hayes and Rockstar Makita Suzuki's Tommy Hayden in exciting race action at the Monterey lagoon.

Winning his fifth pro race overall at Laguna (Captain America won here in July of '04 and also has 3 World Superbike wins at the famous Monterey, CA. track), Bostrom fired a shot that has been in the chamber for some time now to show everyone that he is not only back but that he is very capable of running with the boys. After leading for the first lap, BBoz mis-judged the corkscrew turn on the second go around, and fell behind Hayes and then-leader Jake Holden (M4 Monster Energy Suzuki-4th place finish) when running into the dirt, and fell just over 1.5 seconds back from the front battle. Working his way back up, he was able to lead the last nine laps and hold off Hayes by .440 seconds at the stripe for his third overall AMA Superbike premier class win in front of his home state fans on hand.

Also of note for today's finishers was little brother Eric on only his second race event back in action on a Cycle World/Attack/Yoshimura Suzuki who had a great battle mid pack that started with him 13th and ended with him finishing 7th overall. Very impressive indeed!

Great job and congrats to Ben 'Captain America' Bostrom on his great win at Laguna and his return to the top rung in an AMA Superbike race. Couldn't have happened to a nicer, harder working guy. Bravo dude, take a bow!

And great job by little brother Eric as well. Who knows, it might not be too long to see both of them on the box at the same time. With three events and six races left in the AMA Superbike Championship this year nothing is out of the question. And to see the Boz Bros on the steps together would be way too cool.

Next round action is at VIR in three weeks. Josh Hayes takes a nine point lead over Tommy Hayden and Jake Zemke another 42 points back in third to the Virginia double header round August 13-15th. Stay tuned as this one is far from over yet!

Here's the story on the race from the bible of motorcycle racing news and Cycle News.com's Paul Carruthers:

And here is Chris Martin's version of the race from the great folks at SpeedTV.com: