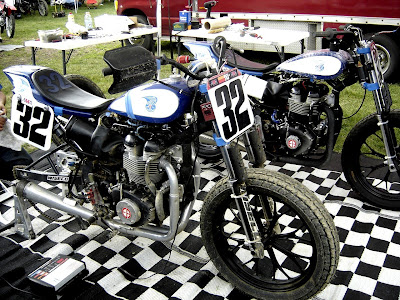 One of the newer teams to contest the AMA Pro Flat Track/K&N Filters sponsored by MotorcycleSuperstore.com series is the Bonneville Performance Triumph team campaigned by National #32 Shawn Baer and team head honcho Bill Gately. Missing the field at Prescott Valley in May by placing 8th in the semi, the team has put it in the finals at both the Springfield Mile and at Lima last week. Unfortunately, mechanicals have sidelined the team early in both finals, but look for them to come back strong as ever and work their way up in the standings with hard work--and some luck thrown in, as well.

Brett Noble over at TriumphFlatTrack.com has a race report filed by team lead Bill Gately here that gives some insight into the team's hard work and efforts. Check it out:

And here as well:

Also, thanks again to Brett for posting some more of my shots over at his super site. While at Lima last weekend I took some shots of the Bonneville Performance team and Brett was kind enough to put them up and showcase them on his great site. Check those out here and keep an eye on the #32 team as the try to contend against the deep competition in the series this year: