Eric Bostrom Talks About His Return to AMA Superbike Racing 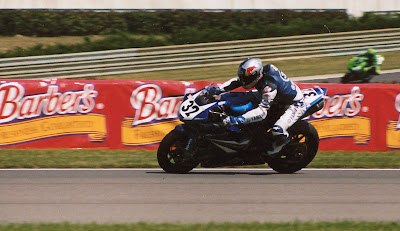 If you can't tell by now from reading what I have to say on this stuff, I'm obviously a big fan of the Bostrom Brothers. So when news came down the pike that Eric Bostrom would be returning to the AMA Superbike Championship to run a select few races this year, needless to say, I was stoked. Not only to see him come back to the track but for the series itself, as well.

The two-time premier class runner up had been away in South America since the end of the 2008 season (and away from racing), so to expect great leaps and strides with a newly-formed team (Cycle World/Attack Performance/Yoshimura Suzuki with GSX-R1000 AMA-spec Superbikes at their disposal) would for even the most active of racers been a stretch right out of the box. But then again, to not see some progress or some glimmer of 'races past' shown in a reasonable amount of time would or could surely tarnish the image, history or pedigree-so to speak-of any racer's or fan's expectations and/or accomplishments. Well, after his first two events back ole EBoz is having none of that, and after a VERY impressive mid-pack run at Laguna on Sunday that netted a seventh-place finish, he is showing the fire inside is still alive and the desire to get to the front is definitely still there. And bravo!

Putting together a strong run with a new team and learning the eccentricities of the new-rules machines compared to the fire-breathing dragons of the '08 season has made for a pretty good return so far. And if things keep getting better, Eric COULD very possibly nail down a podium before the end of the season. Possibly. And that would be great not only for him, obviously, but for the fans and the series as well. The man with the boyish smile makes for a great interview and his enthusiasm, just like his older brother Ben's, is unequaled.

The remaining three rounds and six races in the 2010 AMA Superbike Championship are going to be even more interesting, and could lay some hefty groundwork for Eric to work with going into the 2011 season. I think it's not only going to be fun, but it's going to be fun to watch as the action on the track has just stepped up another notch with ole Eboz back in town, and with Brother Ben topping the box last weekend we are going to see some classic Bos Bros action on the track together again. And that is a great thing!

Thanks to the great people at On The Throttle and RoadRacingWorld.com, we get a chance to hear straight from Eric himself exactly what he feels and what he sees in AMA Superbike at this point in time, the new team, and how glad he is to be back. Pretty good stuff.

I'll shut up now and you can go here and hear it for yourself: