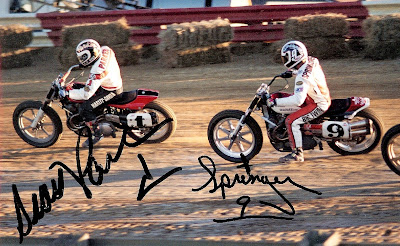 Scott Parker on the #1 H-D Factory XR leads Jay Springsteen on the #9 Bartel's H-D XR during practice at the Terre Haute Half-Mile in July of '97. Parker won 9 AMA Pro Flat Track Grand National Championships over the course of his two decade plus career, along with 94 races. 55 of those wins came on mile tracks. Springer was the '76-'78 AMA GN Champ, and among friendships they both shared 13-Time AMA Grand National Champion tuner Bill Werner among their respective camps while riding for the H-D Factory Team. Parker retired in 2000 and can occassionally be found checking out the action at the track. Springer teamed with Werner during the '09 off season to form Werner Springsteen Kawasaki Racing and added rider #42 Bryan Smith to ride their pro twins mounts.
Terre Haute was a unique half mile that hosted AMA Flat Track regularly through the mid '70s, and still is one of the hottest tracks on the schedule for USAC and World of Outlaws sprint cars. From '74-'76 the AMA hosted some great events for winners Corky Keener, Mike Kidd and Kenny Roberts. Roberts also was handed his second GNC #1 plate their at the '74 running of the event. But when the AMA showed up again in '77, the series of ruts and holes that had been pounded into it and exposed from all the sprint car action, was rougher and more dangerous then ever. '75 event winner and future '81 GNC and AMA Flat Track Manager (currently) Mike Kidd crashed hard there and showed up at Indy the next weekend with a cast on his arm. It didn't slow HIM down much, but it put the writing on the wall for the AMA not to return for 20 years.
However, return they did in '97 to a track that was rougher and more dangerous then it was two decades earlier. Numerous crashes, bike fires, and a couple of riders helicoptered out put the writing on the wall and the AMA never returned to the Terre Haute Action Track.
Looking closely at the photo you can see the washboard look the track developed and the ruts that combined looked like glazed hell. It was, unfortunately. Back in the old days TH would draw one heck of a crowd and the riders were able to put on one hell of a show for the crowd.
-------------------------------------------------------------------------------------------------

Great interview over at Motorcycle-USA.com with former 9-Time AMA Flat Track Grand National Champion Scott Parker. Scotty talks about some of his racing highlights, how he handled tracks like Daytona when he was really considered a mile specialist, and some work he has been doing for the Harley-Davidson Factory in regards to the new XR1200 series Sporster just released this year here in the States.

As always, Scotty is very open, colorful, personable and humble in talking about his career and accomplishments. And whether you are a fan or not, this is a must read!

Check it out, and good to see Scotty on the scene! Hope to see you at some of the races again this year!