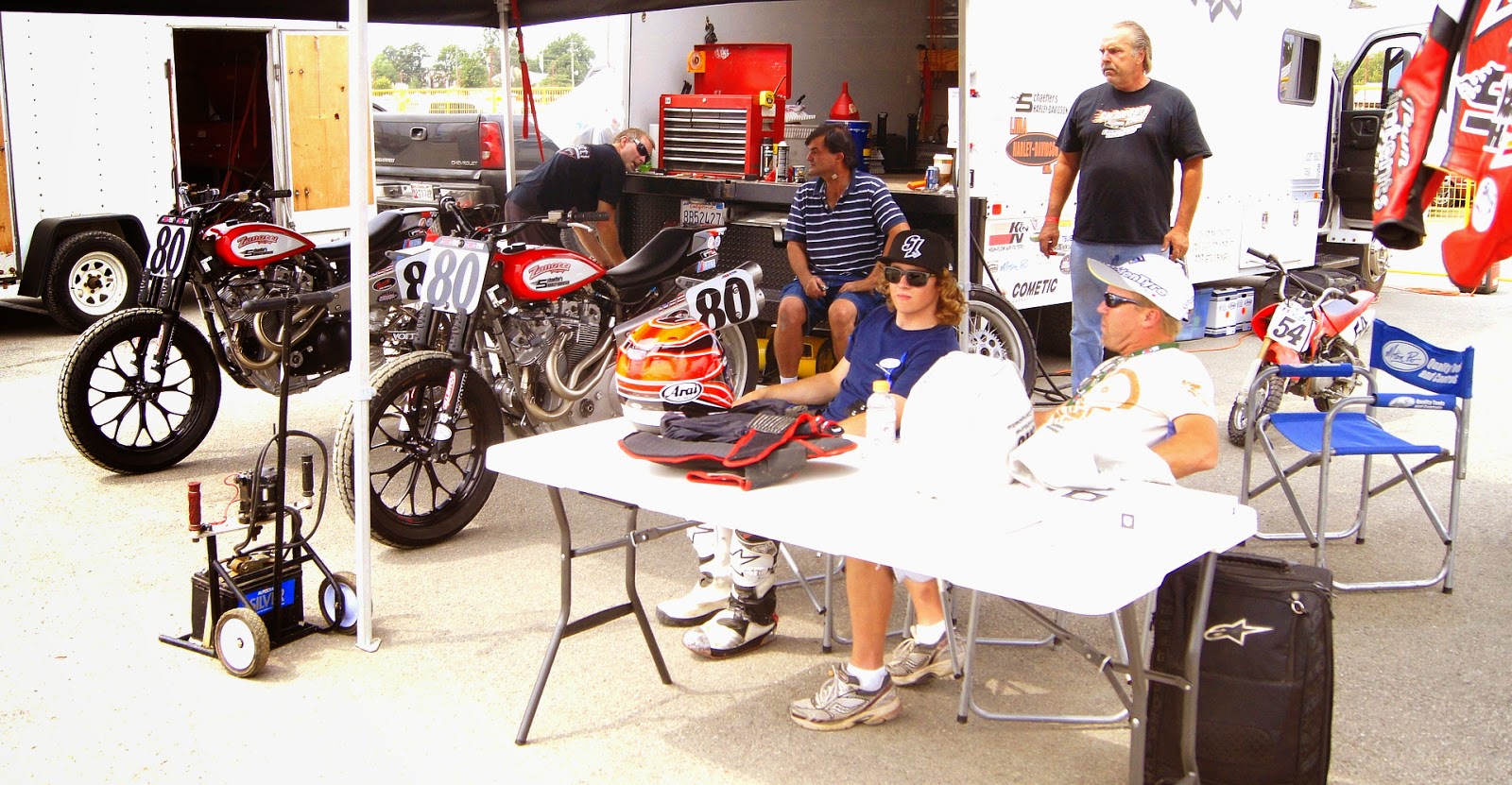 With new signee Kenny Coolbeth, Jr. taking his first short track win at Daytona last week since the indoor short track round in DuQuoin back in April 2011, and first full-year man and 2-time Grand National race winner Stevie Bonsey bringing home a solid 3rd-place finish, the Zanotti squad is off to a roaring start to the new season ahead. And with the bulk of the series coming up being in the Twins Series division, the racing is bound to get even hotter and heavier than what we saw in Daytona last weekend (which was pretty darn hot!)

In the shot above from round 8 of the 2013 AMA Pro Flat Track Grand National Championship season at the Indy Mile on August 17, the Zanotti team goes about getting rider Stevie Bonsey's #80 Zanotti Racing/RGR/Arai-sponsored XR-750s set for the first round of practice coming up at the Indiana State Fairgrounds-hosted event held over the last weekend of the Indiana State Fair and the big 6th Annual Red Bull Indianapolis MotoGP event being held a few miles down the road at the Indianapolis Motor Speedway.

With now two riders under his umbrella to take care of after fielding a single-rider team for the last several seasons, team owner Zanotti now has twice the output in order to field what is always a competitive effort in the series, and with Top 1 Oil coming on board to help out, this should help to ease a little bit of the financial burden for one of the most dedicated team owners in the sport.

A big congrats to all of the guys on Team Zanotti, as we're looking forward to chatting them up some more come the Springfield Mile I round on May 25, and this is great news for these guys! Check out their full press release below to see all of the particulars as we all weather the break in racing between Daytona last week and the Memorial Day weekend kick off to what is truly the full racing season ahead.

SAN JOSE, CA. –- March 22, 2014 – Zanotti Racing is pleased to announce that a major sponsorship agreement has been reached with Top 1 Oil of San Mateo California. Top 1 Oil has signed on to support the team in keeping David Zanotti's stable of Harley Davidson XR-750's at or near the top of the box in 2014 as the team chases its 4th AMA Grand National Title.

David Zanotti, owner of Zanotti Racing explains, "Since the '70's when my father Mario founded Zanotti Racing and won the first championship with Steve Eklund, we have strived to align ourselves with quality people, products, and sponsors. Top 1 Oil fits the bill perfectly. Keeping five Harley Davidson XR-750’s in top running condition for three time champ Kenny Coolbeth and up-and- comer Stevie Bonsey is challenging. Our goal is to regain the AMA Grand National Title once again and Top 1 Oil will help get us there."

From Frank Ryan, V. P. Sales & Marketing, “Top 1 Oil, a high quality lubricants company, is very excited to be partnered up with the first rate Zanotti Racing team for the 2014 season. Zanotti Racing has a rich racing history similar to Top 1. My father started Top 1 in the 70’s and continues today as A family run business with a focus on producing quality products and working with quality people.”

Zanotti Racing is a leading GNC race team, based in San Jose, California. In the 2010 and 2011 the team won back-to-back Grand National Championships. The team presently has two highly talented riders, Kenny Coolbeth and Stevie Bonsey contesting the 2014 GNC series.

TOP 1 Oil Products Company, U.S.A., is one the largest exporters of synthetic lubricants from the West Coast of the United States. Their synthetic lubricants, grease and chemicals are well-recognized by consumers and racing communities around the world.