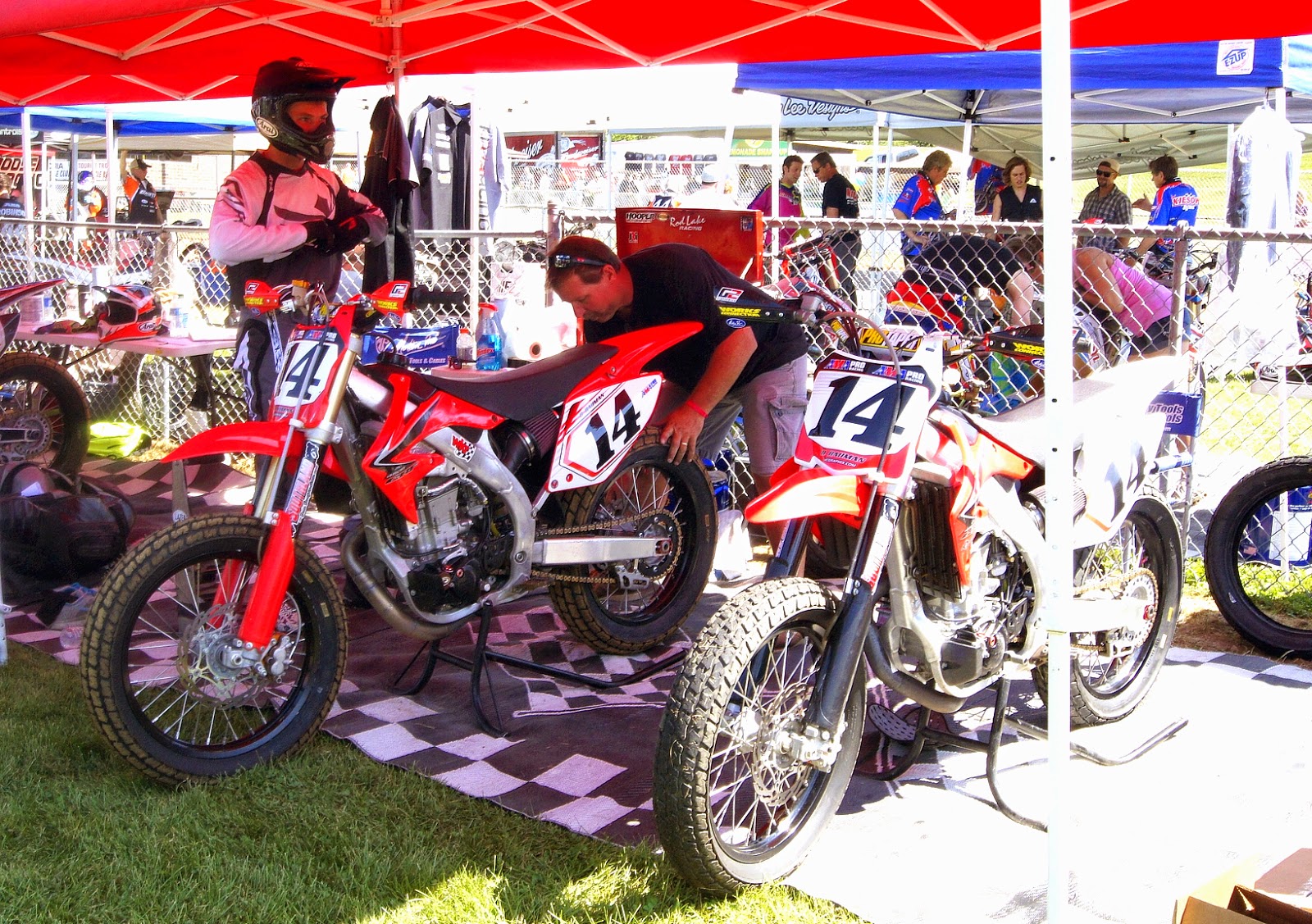 Aboard the #14 Rod Lake Racing Honda, Bauman took advantage of the complete restart after a red flag to jump out to an early lead and romp to the 25-lap National main win over the other 18 riders who made the show. Dash winner Sammy Halbert, in his return to Daytona after missing last season's opening rounds due to injury, did his best to keep Bauman in site and tried his best to reel him in, coming in a close second, with last year's second night breakout winner, Brandon Robinson bringing the USC Racing Kawasaki home in the 3rd-place spot and final spot on the podium.

In the shot above, Briar Bauman is shown in his pit area after the first practice session at round 7 of the 2013 AMA Pro Flat Track Grand National Championship at the Peoria TT on August 11. Bauman's #14 Rod Lake Racing/Specialty Fabrication Honda CRF450R is attended to while he gets ready to take a break from the action. Bauman went on to take a 5th-place finish after leading a couple of laps and battling with Shaun Russell, Brad Baker and eventual winner Henry Wiles.

Cycle News' Larry Lawrence was on hand to document the action and filed this report.

The full set of results from last night's big event at the Daytona Short Track I can be found here, as we get ready for round 2 to hit the track today with first practice scheduled to roll out at 3:30 PM EDT.

A big congrats to Briar and the Rod Lake Racing team for taking the win last night over a stacked field of riders who put on a heckuva great show on the limestone quarter mile track! 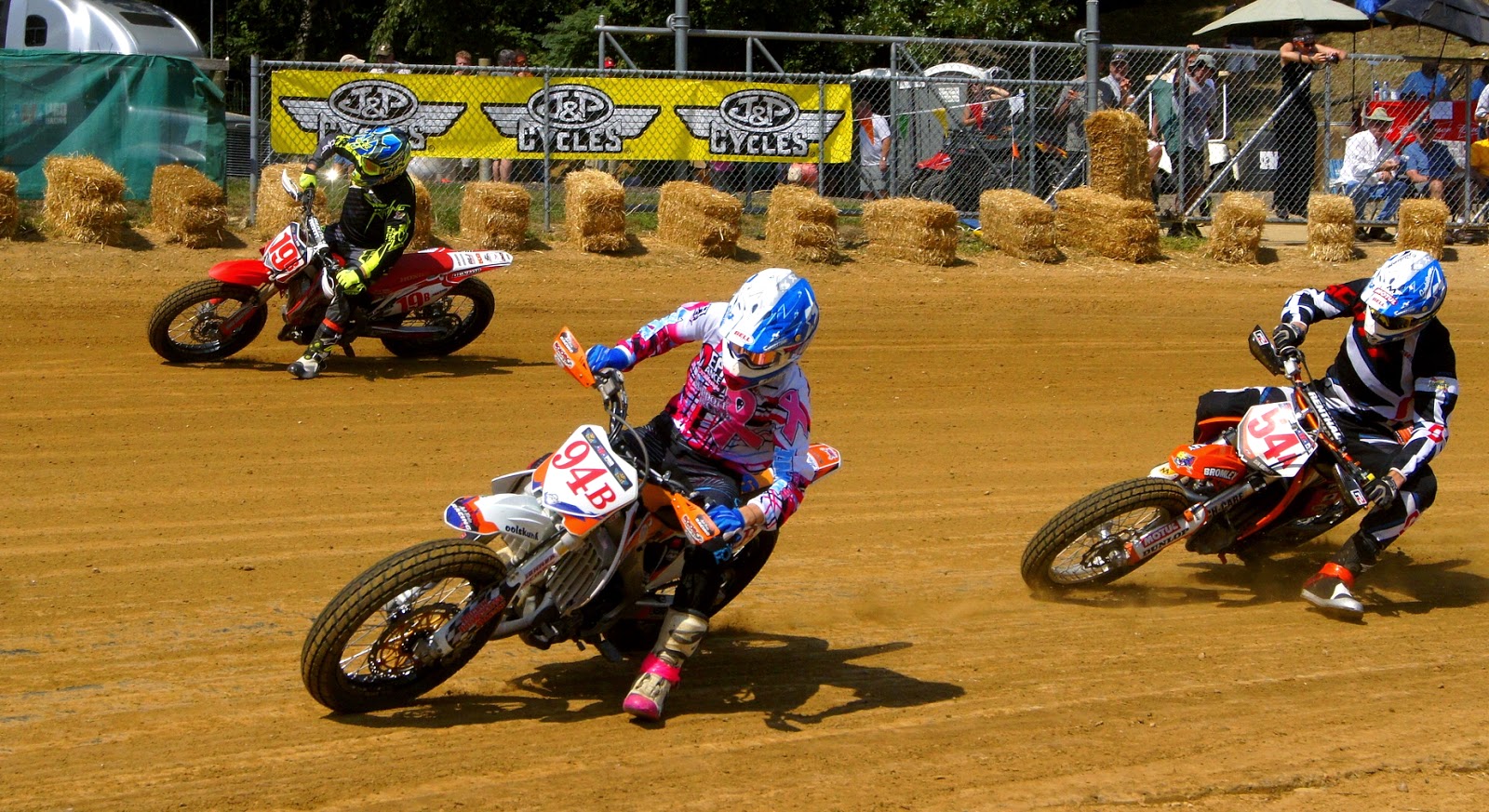 In the AMA Pro Flat Track Pro Singles Championship season opener, third year rider Ryan Wells took the #94B Waters Autobody KTM to the win, leading all 16 laps in the race and taking the win by just over three seconds ahead of Justin Jones and 3rd-place finisher Brandon Wilhelm.

The Waters Autobody KTM team are to be commended for taking their first win together in their second season as a team. Dave Waters and the team work their butts off and to get the win this early in the season is a testament to the time and effort they have put into their team. A big congrats all around and a tip of the helmet from Stu's Shots for a job well done!

In the shot above, Wells is shown on the #94B Waters Autobody Racing/RLJ Racing KTM 450 SX-F while battling with Dan Bromley on the #54A Bromley Brothers/KTM Racing KTM and Justin Jones on the #19B RLJ Racing/Baughner Racing Honda CRF450R during heat race #2 at the Peoria TT round of the 2013 AMA Pro Flat Track Pro Singles Championship on August 11. Wells came out on top in this battle with Bromley and Jones finishing in that order.

And AMA Pro Flat Track and their new FansChoice.TV package are to be saluted for putting some great coverage out on the web last night. Although a few early glitches and buffering issues in the initial launch were noticed, all in all it was a fine job and the three cameras on hand showing the action did a super job of making it seem like you were right on the fence or hanging in the infield taking shots as it happened. Great job guys and thanks for making this happen!

You can also check out the press release below from AMA Pro Flat Track on the happenings from last night.

With round 2 of the season set to hit the track in just a few minutes, you can get all of the needed links to keep up with today's action in our rundown from yesterday's race preview here. Now, let's get ready to roar again as the boys and girls of The Rolling Thunder Show get ready to bring the greatest racing series on two wheels in the world back into our homes and into our hearts! Go get 'em folks and let's get ready to rumble!