Rob Pearson and the Iowa-based Weirbach Racing team had a rough start to the 2014 AMA Pro Flat Track Grand National Championship season at the Daytona Short Track I & II. After some decent qualifying efforts on both nights March 13-14, and making the Dash for Cash in round 1, things seemed to progressively get worse for the Morton, IL. resident.

After fighting through for a 16th-place finish out of the 19 riders on night one, Pearson had to come through his semi to make it to the National main in round 2, but came up just short after the 19-rider event was filled.

In the shot above, Pearson is shown on the #27 Weirbach Racing/KDM Forest Products Honda CRF450R during the final qualifying session at his home track at the Peoria TT during round 7 of the 2013 AMA Pro Flat Track Grand National Championship season on August 11.

Check out the Weirbach Racing team's release below to see how Bugs and the team persevered during the opening rounds, and also what we (and the great group of strong fighters on the team) have to look forward to come round 2 at the Springfield Mile I on May 25.

Daytona Bike week has come and gone and that lime rock short track has got
the best of me again.

After qualifying 12th the first day, I got a good start in the heat and ended up 2nd,
good enough for the dash for cash and a front row start in the main.
Ended up 5th in the dash and after bouncing everywhere but on the ground
I could only manage 16th in the main. 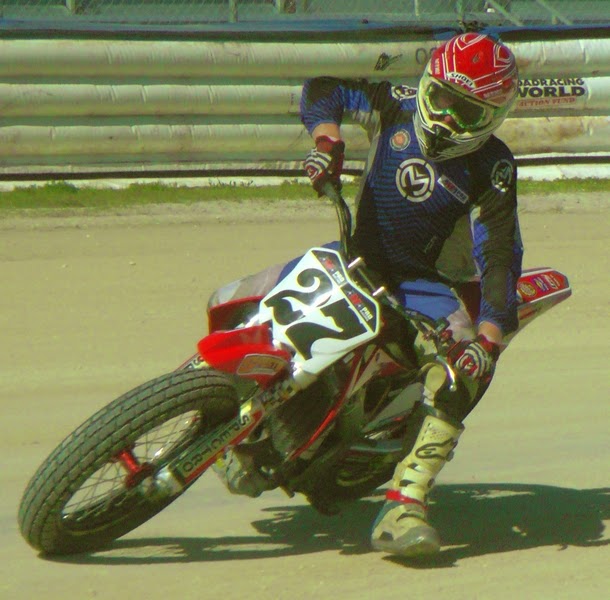 Rob Pearson on the #27 Weirbach Racing Honda CRF450R is shown during a qualifying session at the Daytona Short Track during the season-openers on March 13-14. Photo courtesy of Weirbach Racing by Mia Moore/FlatTrack.com's Fans in the Stands.

The second night things were worse yet.

I qualified 18th which was just good enough for the front row in my heat
and after the battle for the last transfer spot I came up a spot short and
was headed to the semi.  I had a tough group, but knew that I could make it.

I was off and running in 3rd looking for a spot to pass Carver for 2nd while
trying not to give up the last transfer spot into the main at the same time.
As I was looking for a way under Jeffery here comes Henry Wiles around
the outside of both of us and my day was done early.

I was going to use my provisional since I was in the top ten in points from
last season. Jared Mees finished behind me in the semi but had more points
last year and got to use his provisional.

We did manage to get out on our new Kawasaki twin at Steve Nace's Half-Mile
All-Star Races. The new Kawasaki 700 feels good and I will be ready for Springfield!

Hope to see you there.