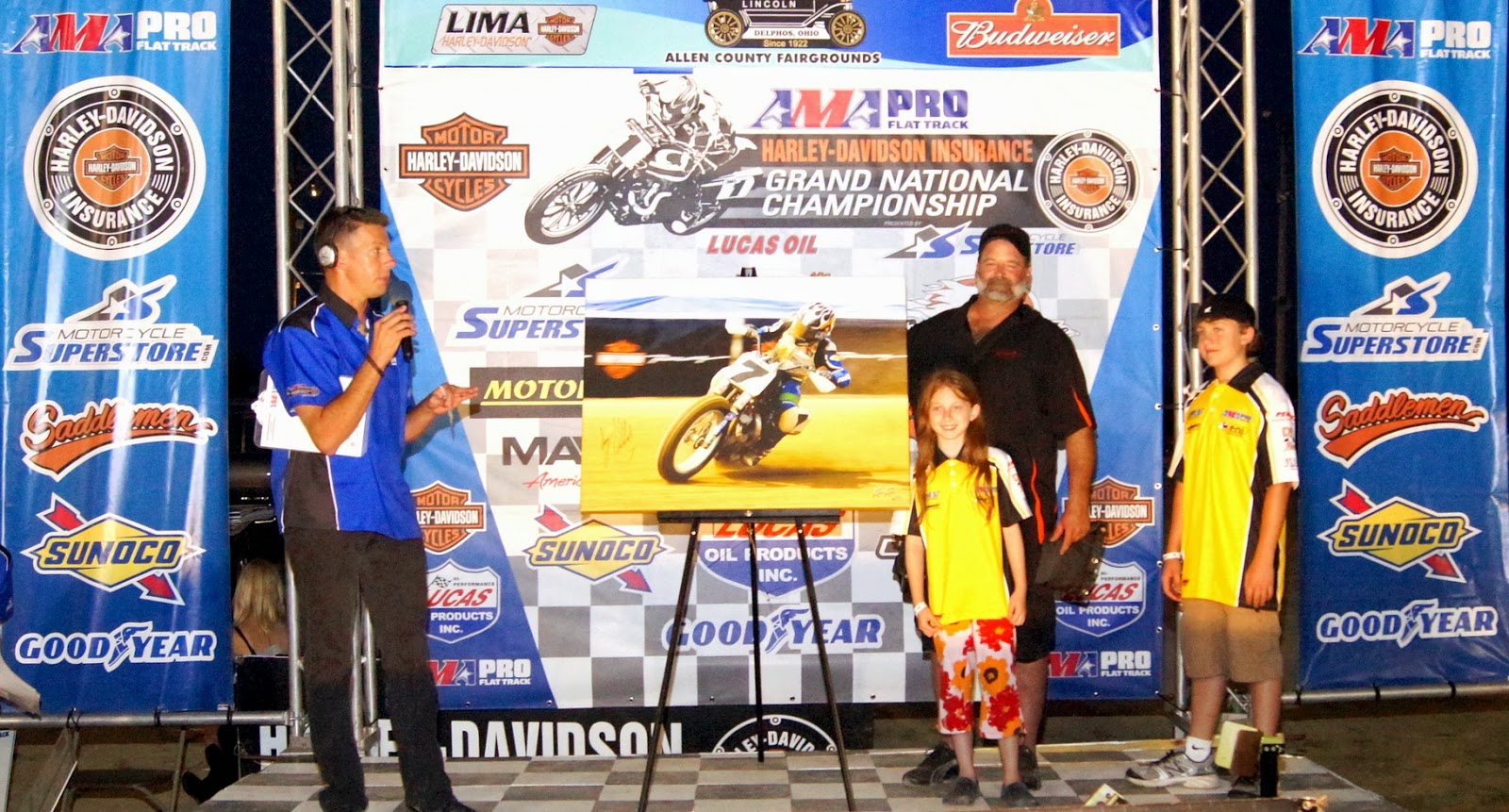 Great news for fans of AMA Pro Flat Track was announced just a few minutes ago, as Ken Kerr of Kerr Graphix in Kansas will be offering some really nifty 30x40 metallic canvas prints for sale during Bike Week activities heading into the 2014 AMA Pro Flat Track Grand National Championship season-openers at the Daytona Short Track next week, March 13-14.

Kerr, a lifelong fan of motorcycle flat track racing, will be offering for sale some of his work that will be personally autographed by some of the top riders on The Rolling Thunder Show that any and all fans of the greatest racing series on two wheels in the world would be proud to have, own and hang on their wall.

Beginning with the 'official' season kick-off at the Steve Nace Racing AMA All-Star National Flat Track Series at Oglethorpe Speedway outside Savannah, GA. this Friday, March 7, Kerr will be gathering some of the stars of the sport to personally autograph some of his collection that will be offered to the fans for sale for $300/each. KK will also be on hand at the second round of the SNR All-Star Series at Volusia Speedway Park in De Leon Springs, FL. this coming Sunday, March 9 before heading to the grand daddy of them all in Bike Week activities with the season-openers at the Daytona Short Track next week on March 13-14.

Kerr will be gathering stars Bryan Smith, Sammy Halbert, Chris Carr, Jared Mees and 2013 AMA Grand National Champion Brad Baker at Oglethorpe this Friday to have each and everyone of them sign these magnificent pieces of art, which will then be available for sale to fans of The Rolling Thunder Show of AMA Pro Flat Track.

In the shot above, Kerr can be seen on the podium at the Lima Half-Mile on June 30, 2012 during the raffle drawing for one of his canvas prints that was held to benefit the Lloyd Brothers Motorsports efforts in gathering funds for the Roadracing World Air Fence Fund for AMA Pro Flat Track. The canvas print on display of 2011 winner Sammy Halbert went to one lucky fan that year.

You can check out more below with Ken's official press release concerning his offerings that will be available later this week with the release that we were proud to prepare for Ken that was just sent out to the rest of the media just minutes ago.

And if you're in and around the races in Georgia and Florida in the next week or so, be sure to hunt Ken down and check out his work, any of which would look absolutely magnificent hanging on any fan's wall at home or in their 'man' or 'fan' cave. And be sure you tell Ken that Stu's Shots sent you!


Sabetha, KS.-- March 3, 2014 – Ken Kerr of Kerr Graphix Racing Photography in Kansas will be hitting the road later this week and heading towards the 2014 AMA Pro Flat Track Grand National Championship season-openers at Daytona on March 13-14 and will be offering fans some special, autographed 30x40 canvas prints of some of his work from some of the previous seasons. 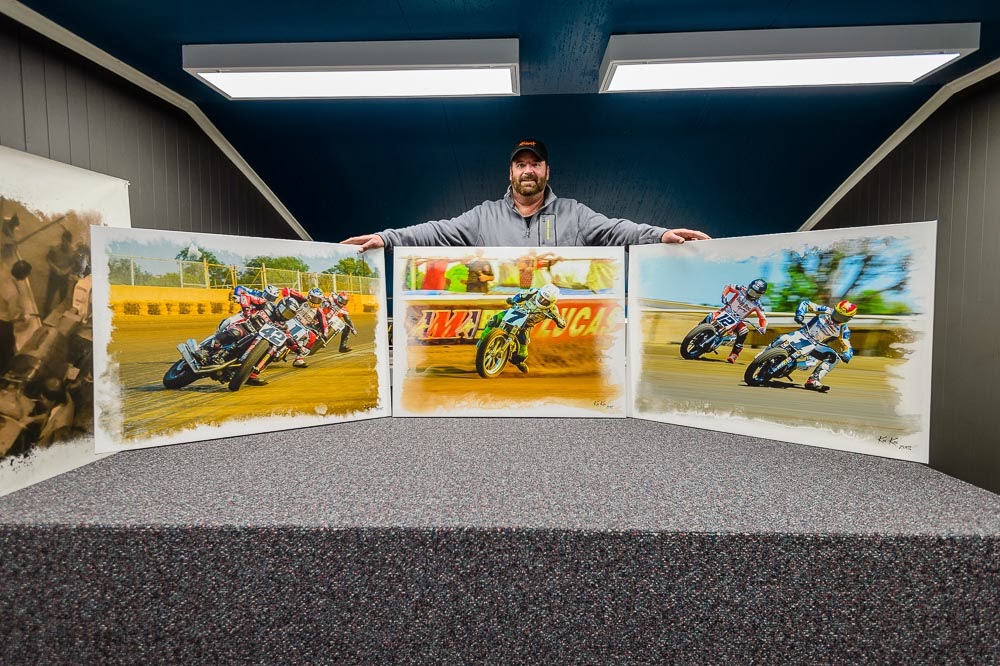 Ken Kerr of Kerr Graphix is shown with several of the canvas prints that will be autographed by the riders and available for sale beginning this Friday, March 7 of Daytona Bike Week. Kerr has been a fan of flat track motorcycle racing for several decades and his work has helped and benefitted the Roadracing World Air Fence Fund for AMA Pro Flat Track for several seasons. Photo courtesy of Ken Kerr/Kerr Graphix.


“I have contacted each of the riders featured on these 30x40 framed canvas prints, Smith, Mees, Halbert, Carr (not shown) and the new Grand National Champion Brad Baker,” stated Kerr, “and they have all agreed to personally autograph these canvas prints. The canvas I used to create these prints is the industry's first and only metallic canvas material. This canvas is amazing! All of the prints will be signed by the riders at Oglethorpe this Friday during the first Bike Week event of the season, and all of the prints will be available for sale at $300/each and can be purchased through my website or picked up at any of the Bike Week events starting this Friday.”


Kerr, who has been following flat track racing since the late '60s and has been offering his wonderful photography since the 2007 season, has been involved in several fund raisers for the racers over the years, most recently for the Lloyd Brothers Motorsports 2012 fund raiser for the RoadracingWorld Air Fence Fund. At the Lima Half-Mile in June '12, Kerr's canvas print of Sammy Halbert was raffled off to a lucky fan at the track with all proceeds going to the Air Fence Fund raiser being conducted by the LBM team of Dave & Mike Lloyd, which saw the funds go towards new safety barriers used at AMA Pro Flat Track National events.


Kerr uses only the finest of materials in his work, and each of the canvas prints is constructed of a material called 'silverada,' which is a metallic, pearlescent finish that not only brightens and highlights the wonderful colors and features of each of Kerr's photos, but brings to life the photos in which they are used.
You can check out more about Ken and his wonderful work & contact him at: