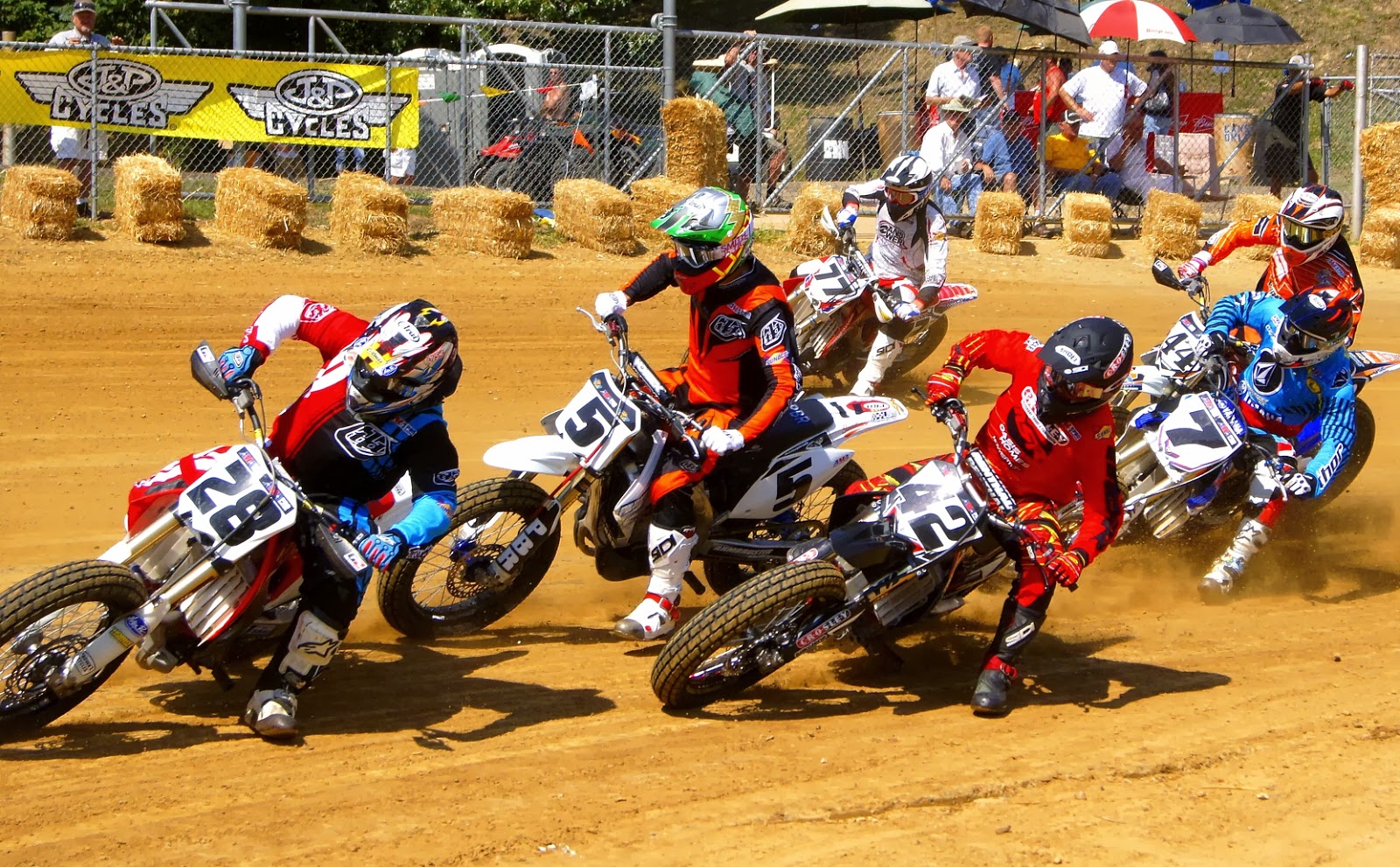 AMA Pro Racing announced today that effective with the season-opening rounds of the 2014 AMA Pro Flat Track Grand National Championship at the Daytona Short Track in 12 days that Dunlop Tire will be coming on board as one of it's official sponsors and suppliers for the new season.

Although Goodyear has been considered the 'official' spec tire for The Rolling Thunder Show for the last several seasons, Dunlop has actually been listed in the rule book as well for tires that are 'eligible' for usage in the series' races. And this new venture also opens the door for Dunlop to have representatives on hand for the upcoming season to offer sales and technical service to the competitors at each race on the 16-race schedule, something that has been missing over the course of the last few years.

Whether or not this will be a better or less expensive option for the teams is yet to be seen or announced, but opening the door for other tire manufacturers to come in could prove to be a benefit down the road, considering the inroads that GoldenTyre, an English-based supplier of race rubber, has been trying to make in the underling series around the country the last season or two. GoldenTyre has been able to offer racers sets of tires for approximately $25-35 less than any of it's other competitors in the Steve Nace Racing Series, and have been supplied in the States by former 7-Time AMA Grand National Champion Chris Carr out of his home base in Pennsylvania. And any chance that a cheaper option may or could be available will benefit everyone in the paddock all around.

In the shot above, riders scramble for position on lap 1 of heat race #2 at round 7 of the 2013 AMA Pro Flat Track Grand National Championship at the Peoria TT on August 11.

Leading the fray is Shaun Russell on his self-sponsored #28 Honda CRF450R, with Jake Johnson on the #5 Parkinson Brothers Racing/Arai Honda, Bryan Smith on the #42 Crosley Radio/Howerton Motorsports Honda, Brandon Robinson on the #44 TJ Burnett Farms/USC Racing Kawasaki KX450F and Sammy Halbert on his #7 Fredericktown Yamaha/Van's Yamaha YZ450F close in the mix. Dan Mischler on his #77K Mischler's H-D/BMW-sponsored Honda rolls wide to get out of the spray as the field bunches up in between turns 1 & 2.

It's almost time for the racing to get started for the 2014 season as Daytona kicks off on Thursday, March 13, and a big handful of the racers will be on hand next Friday, March 7 as the 'unofficial' season gets into full swing at Oglethorpe Speedway's hosting of the Steve Nace Racing AMA All-Star Series, long considered the big kick-off to the week of big racing heading into Daytona the next week.

You can check out the full press release below from AMA Pro Racing as they outline Dunlop Tire's new involvement in the greatest racing series on two wheels in the world, as we all wait for the season to get in gear and help us Midwesterners get over the long, cold and snowy winter we have all been dealing with. Let's go racin'!


DAYTONA BEACH, Fla. (March 1, 2014) - AMA Pro Racing has appointed Dunlop to supply tires and service for the 2014 AMA Pro Flat Track Grand National Championship. Dunlop will attend AMA Pro Flat Track events throughout 2014 offering sales and service to competitors.
The 2013 AMA Pro Flat Track eligible tire regulations will remain the same for the 2014 season. Goodyear tires remain the correct spec tire and competitors will continue to use existing Goodyear offerings until further notice. Starting with the season-opening round at the DAYTONA Flat Track, Dunlop will be at events to offer sales and provide first-rate technical tire assistance for all AMA Pro Flat Track competitors.
Dunlop has been the official tire sponsor of AMA Pro Road Racing since 2009 and continues to grow their support of professional motorcycle racing in the United States. This existing relationship made it a natural evolution for the company to transition into AMA Pro Flat Track as well. 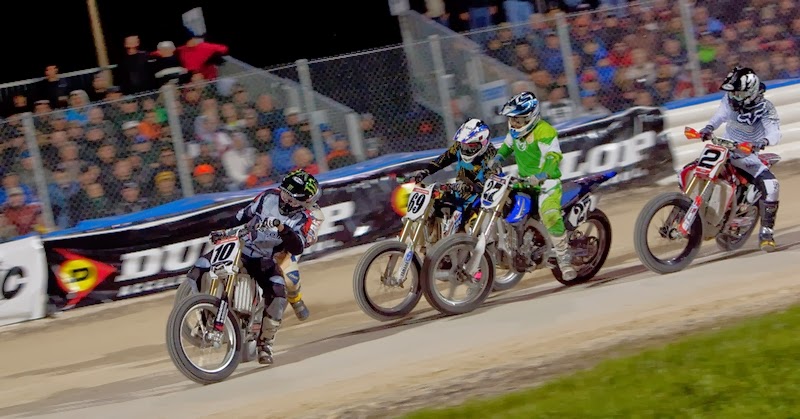 Johnny Lewis #10, Jethro Halbert #69, Rob Pearson #27 and Kenny Coolbeth, Jr. #2 battle during one of the AMA Pro Flat Track Grand National Championship races at the Daytona Short Track in the season-opening rounds in March 2010. AMA Pro Racing announced today that Dunlop will be coming on board for the 2014 season as one of it's new sponsors & suppliers, beginning with the season-openers at Daytona on March 13-14, 2014. AMA Pro Flat Track photo by Dave Hoenig.
"We made the decision to work with Dunlop because they offer a service that directly suits our needs," said Dan Johnsen, Director of Flat Track. "We're very excited to have Dunlop on hand at events this season for distribution and service purposes."
Dunlop is planning an expanded media release with additional details of the new program at the season opening event at Daytona International Speedway.
DAYTONA Flat Track will once again play host to the AMA Pro Flat Track season opener as the series kicks off the 2014 season with a doubleheader on the quarter-mile lime rock track located outside Daytona International Speedway's west banking on March 13 and 14, 2014.
For tickets and information, please visit http://www.daytonainternationalspeedway.com.
About Dunlop:
Dunlop is the largest supplier of original equipment and replacement motorcycle tires in the U.S. and the only manufacturer of motorcycle tires in North America. With North American operations located in Buffalo, NY, Dunlop has been making and selling high-quality tires in the U.S. since 1923. For more information, visit www.dunlopmotorcycle.com.