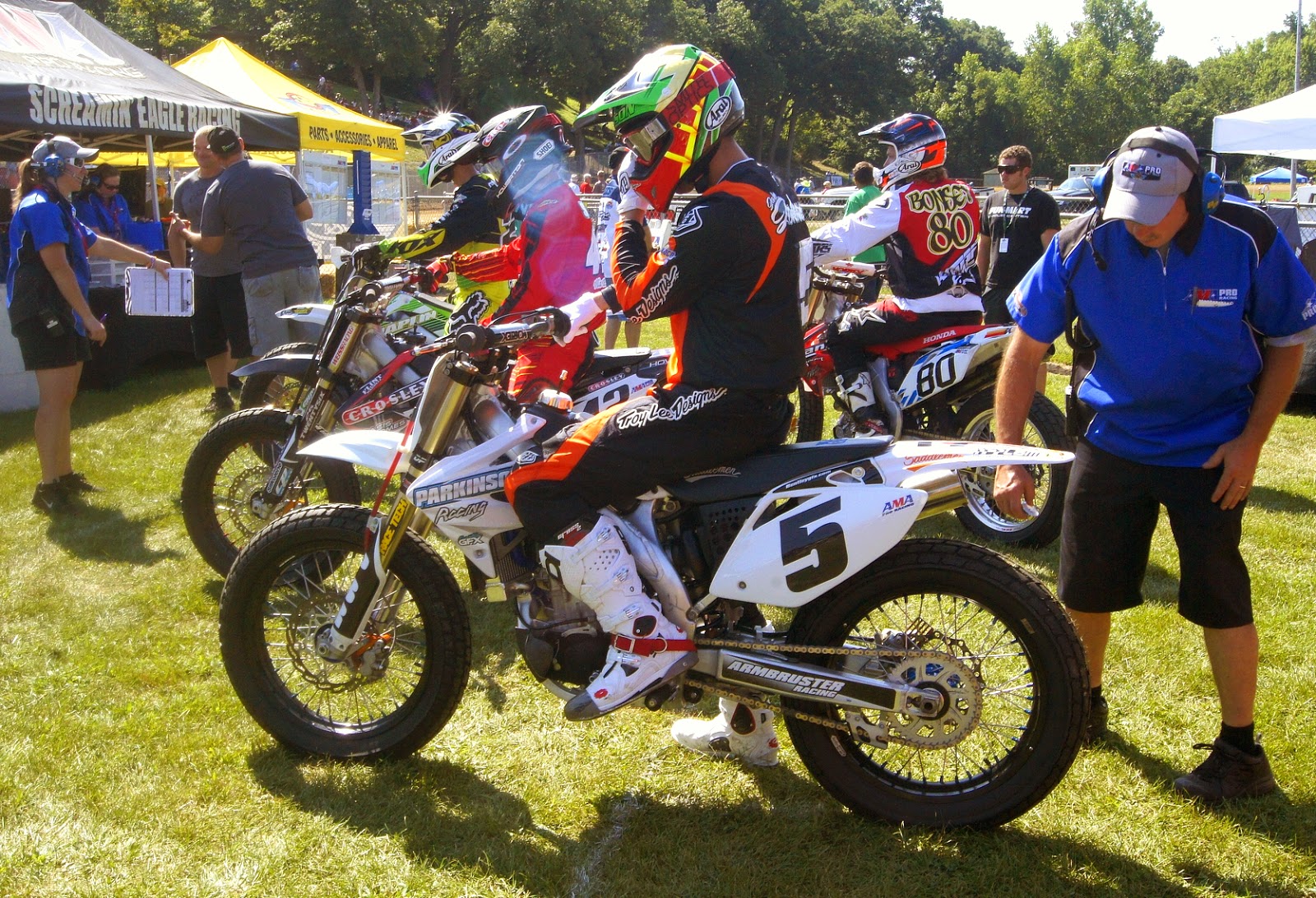 After the long off-season break, the opening rounds of the 2014 AMA Pro Flat Track Grand National Championship season are in the books, and what a wild and wonderful two nights of fun-filled racing it was.

Although 2012 AMA Pro Flat Track Rookie of the Year Briar Bauman and 3-Time AMA Grand National Twins Champion Kenny Coolbeth, Jr. took the wins, Bauman his first-ever National main event win and Coolbeth his first-ever National win at Daytona, probably the next best run of the two nights of racing came from another of the savvy veterans of the sport.

Jake Johnson, in just his second National ride on the #5 Lloyd Brothers Motorsports/Parkinson Brothers/Armbruster Racing Honda CRF450R, brought his still-new team home a stellar 2nd-place finish in round 2 on Friday night, March 14. And it was also the former 2-Time AMA Grand National Champion's third overall time on the new mount, having taken over the Parkinson Brothers Racing Honda ride at the Peoria TT back in August not too long after he departed from the Zanotti Racing team.

Johnson had what could without a doubt be characterized a near-career night run on Friday, after qualifying in 2nd-place behind fast qualifier Sammy Halbert, earning the pole for the National main via winning the fastest heat race of the night, and then also going out and blitzing the mostly-younger competition on-hand in the six man Dash for Cash event. Oh yeah, he then wrapped up his hot night by taking 2nd-place in the 25-lap National main, and in doing so, coupled with his 10th-place finish from round 1 the previous evening, left Daytona in 2nd-place in the overall standings just 9 points down on Halbert.

In the shot above, Johnson makes some last minute adjustments while awaiting the first round of practice on the #5 Parkinson Brothers Racing/Armbruster Racing/Arai-sponsored Honda at the Peoria TT at round 7 of the 2013 AMA Pro Flat Track Grand National Championship on August 11. This was the event that Johnson first rode the Honda that would eventually become part of his new set-up for the current season.

After splitting from the Zanotti Racing squad in mid-summer, Johnson was a man without a ride for several days, before Dave and Mike Lloyd, along with team crew chief and major protagonist in getting Johnson signed to the LBM squad, spent several sleepless nights putting together the deal that would see the 2010-2011 AMA Grand National Champion and 2-Time AMA Grand National Singles Champion a part of one of the most diverse squads in the oldest form of two-wheeled racing in the world, and especially here in the States.

After racing Castle Rock on a one-off deal, Johnson showed up at Peoria to do battle on the Parkinson Brothers ride, carding a 12th-place finish. The next weekend, he threw his leg over the Lloyd Brothers Motorsports Ducati at the Indy Mile and finished up the season getting used to the team and it's diverse stable of Italian and U.S. mounts. It was around this time that the LBM team and the Parkinson Brothers team started pooling their resources, which led to their partnership for the 2014 season to put a rock-solid foundation under one of the greats and most popular riders of the sport.

Johnson paid them all off in spades last Friday night, and rode like a man possessed and on fire in putting the LBM/PBR Honda in the middle of the box at the end of the evening, and his smile in victory circle--all three times--showed that he was having fun again, something he confessed mid-season last year hadn't been happening for awhile. And for any and all fans of Jersey Jake, that was a great sight to see!

Now we just have to wait for the just-over 65 days until round 3 of the season for the Springfield Mile I on May 25 when Johnson and the team and the rest of the cast and crew of The Rolling Thunder Show get a chance to roll out the Twins Series equipment and hit the high speed mile oval at the Illinois State Fairgrounds. And if Johnson is close in tune then to what he was last weekend with his equipment, the rest of the field might be the one's left without the smiles on their faces.

Check out the Lloyd Brothers Motorsports release below that talks about Jake's hot run last week, and keep an eye out for these guys this year, as it's sure to be a fun season for these guys! 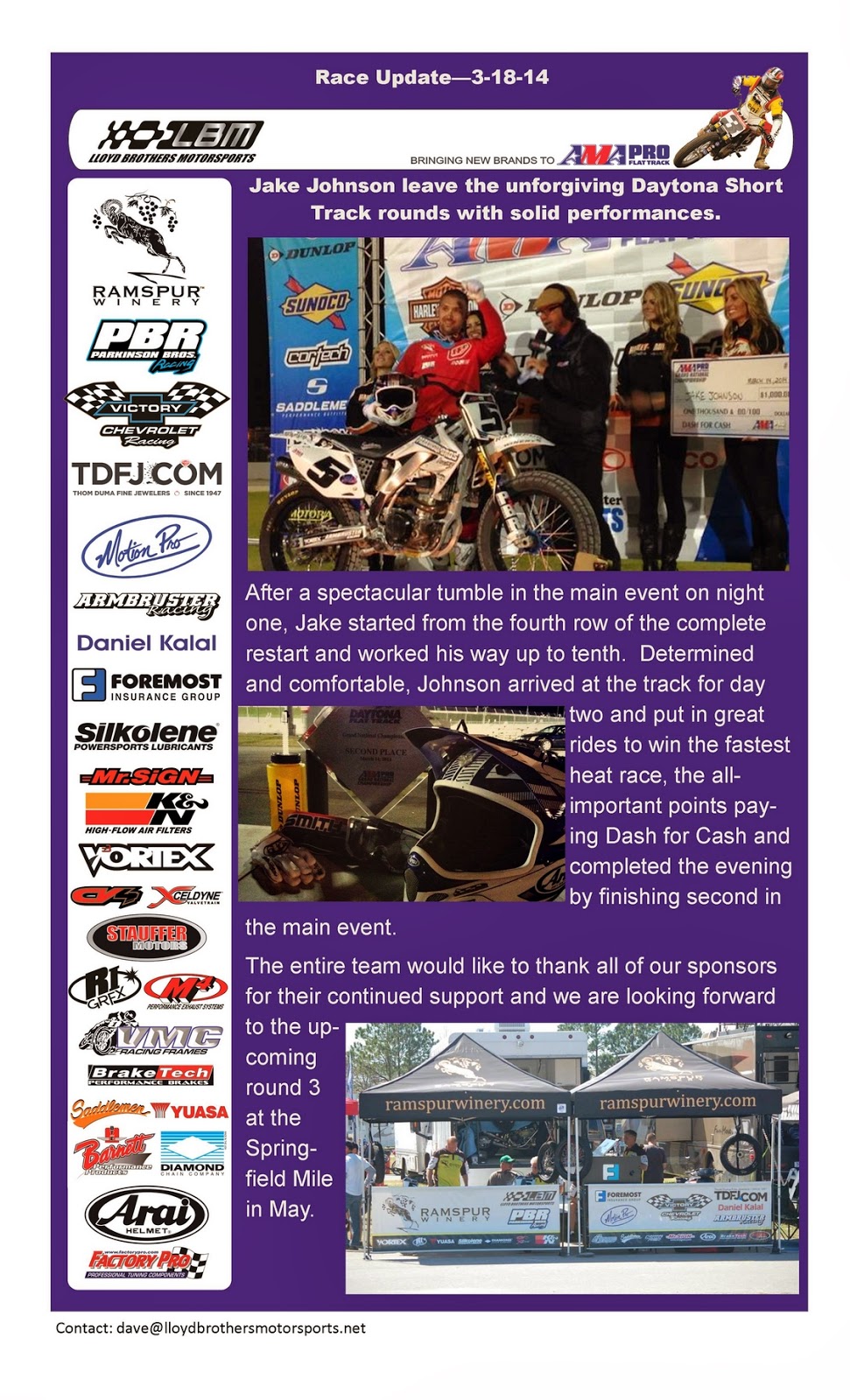