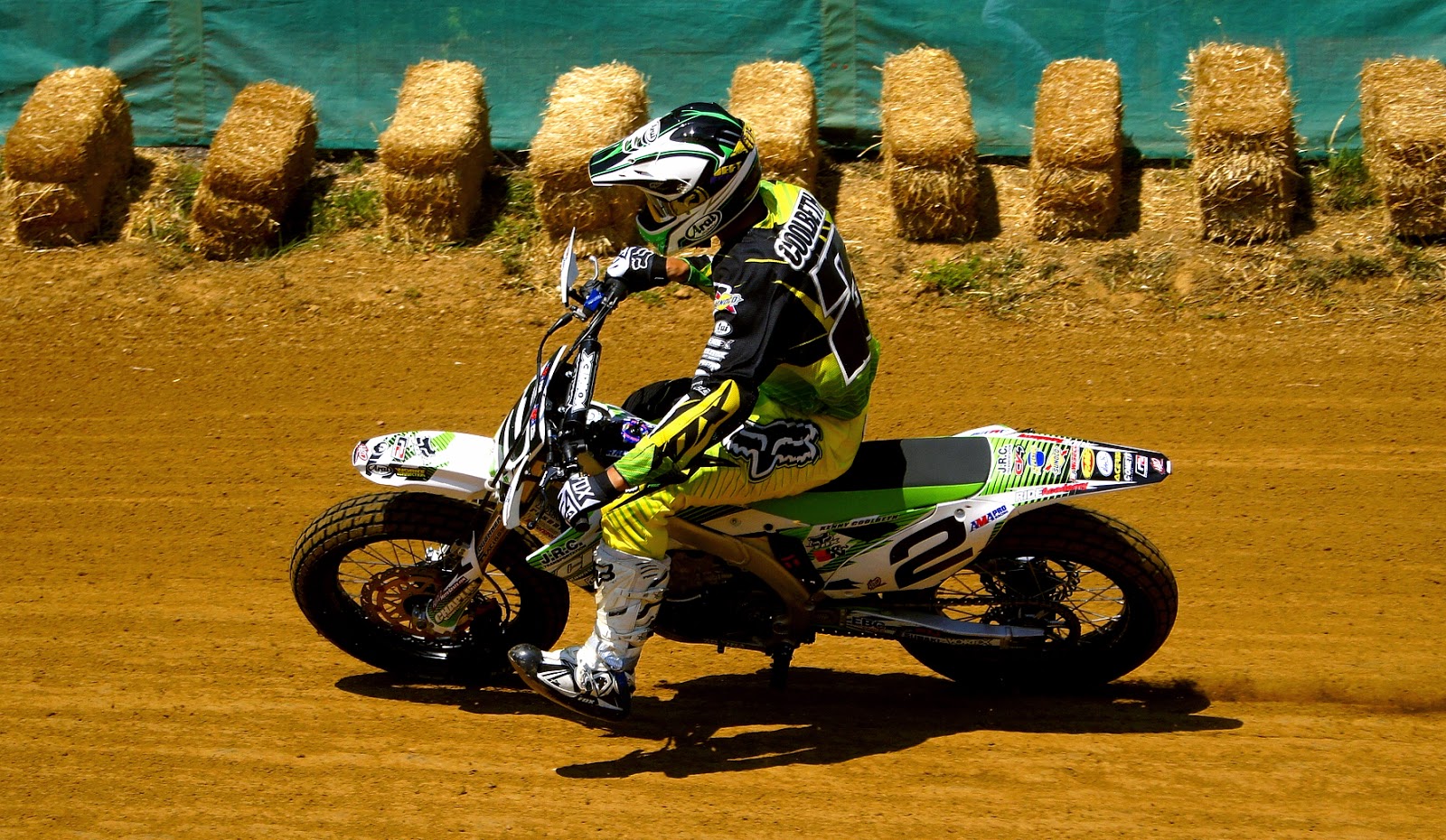 Round 2 of the 2014 AMA Pro Flat Track Grand National Championship season saw the resurgence of 3-Time AMA Grand National Twins Champion and '07 Singles Champion Kenny Coolbeth, Jr. as The King of Cool showed at 36 years young he's not done yet with putting it on top of the box.

After losing his factory Harley-Davidson ride over the off-season, Coolbeth hooked-up with the powerhouse Zanotti Racing squad and showed last night that his off-season training and the equipment that team owner Dave Zanotti fields are a great combination for the long time veteran.

After a lackluster 17th-place finish on Thursday night, Coolbeth turned it around into a runaway last night when he took the lead from early leader Jake Johnson on lap five to run off with the win by just over 4 seconds. And he leaves Daytona tied for 3rd-place in the championship standings with Brandon Robinson, both with 30 points, just 12 back of leader Sammy Halbert and three points behind 2nd-place man Jake Johnson.

After being on Kawasakis the last three seasons, KC2 is back on the familiar Hondas that he piloted for some time before the 2011 season when he originally started riding the Chaplin Kawis. And between Zanotti's great pairing of Coolbeth with team mate Steve Bonsey (3rd-place last night-see below), new tuner Dave Atherton (who wrenched for 2013 AMA Grand National Champion Brad Baker last season) and the rock solid Honda CRF450R's that the Zanotti team has always fielded, this combination looked ultra tough last night in Daytona.

In the shot above, Coolbeth hammers the #2 Chaplin Kawasaki/JRC Transportation KX450F during the final qualifying round at the Peoria TT on August 11, 2013. In what is a testament to his turnaround, Coolbeth missed the Peoria TT from last season.

This will be one of the guys to keep an eye on come Springfield in just 70 days, as the Zanotti team also fields a pretty tough stable of XR-750s and is still working on their Kawasaki that they started during last year's off-season that could possibly be ready come late May. Either way, Coolbeth knows Springfield well, as does the Zanotti squad, and with two-time National winner and team mate Bonsey settling in nicely with the squad could be the powerhouse duo to run away with it all come Memorial Day weekend. 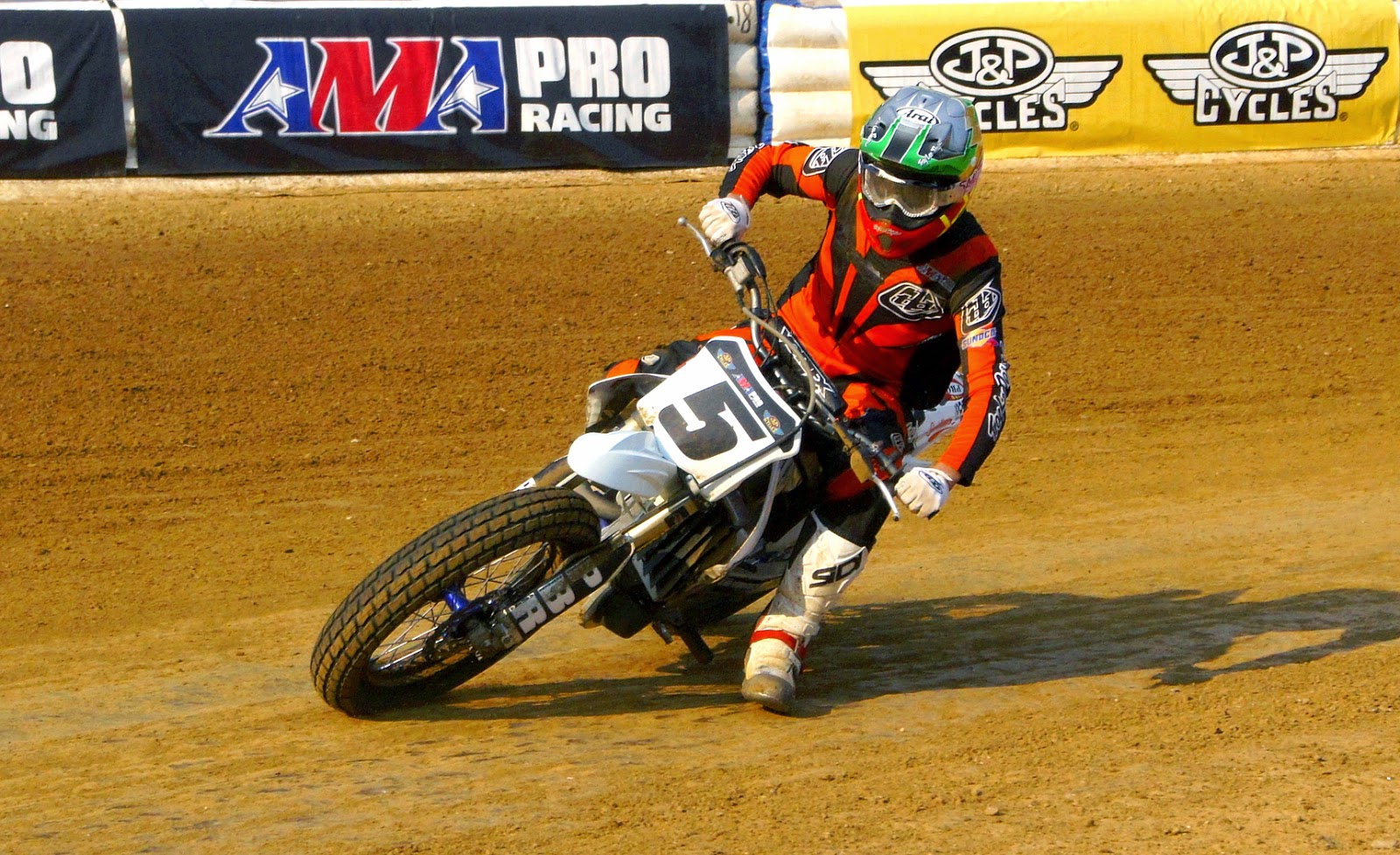 Jake Johnson made the best of night 2 in Daytona last night on the #5 Lloyd Brothers Motorsports Honda by winning the fastest heat, the Dash and coming home the meat in a Zanotti Racing sandwich to finish in the 2nd-place spot in the 25-lap National main, after leading the first five laps.

Obviously rejuvenated during the off-season, Jersey Jake rode like the 2-Time AMA Grand National Champion and 2-Time Singles Champion that he is, and the smiles told it all on the podium. It was great to see after switching teams late last season and leaving the Zanotti Racing squad to hook up with The Lloyd Boys. Tuner Brent Armbruster put a horse under Jake for him and his confidence level was escalated after a 10th-place finish on Thursday night. Jake leaves Daytona nine points back of Sammy Halbert, 2nd-place in the standings (42-33 points.)

In the shot above Jake does his magic in round 7 of the 2013 AMA Pro Flat Track Grand National Championship at the Peoria TT on August 11, which was his first ride on the #5 Parkinson Brothers Racing/Arai Honda CRF450R after leaving the Zanotti team. 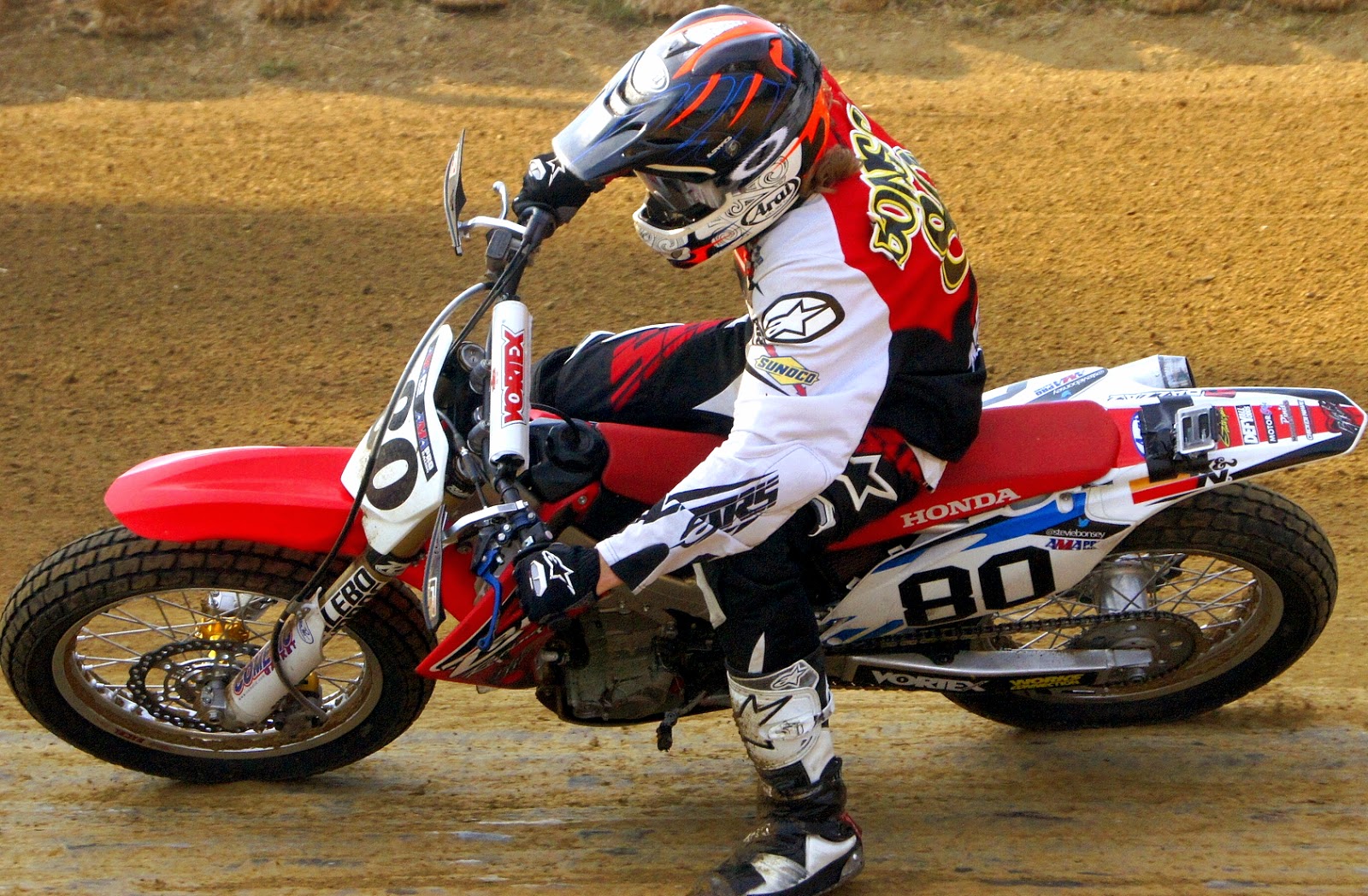 Steve Bonsey rounded out the podium finishers on the #80 Zanotti Racing Honda. Winning his heat and getting 4th-place in the Dash, the Salinas, CA. resident coupled his night with his 9th-place finish on Thursday night to leave Daytona tied for 5th-place in the points with previous night's winner Briar Bauman, with 28 points.

In the shot above, Bonsey works the #80 Zanotti Racing/RGR Honda CRF450R during the National main at the Peoria TT on August 11, 2013 in his first National appearance for the team. 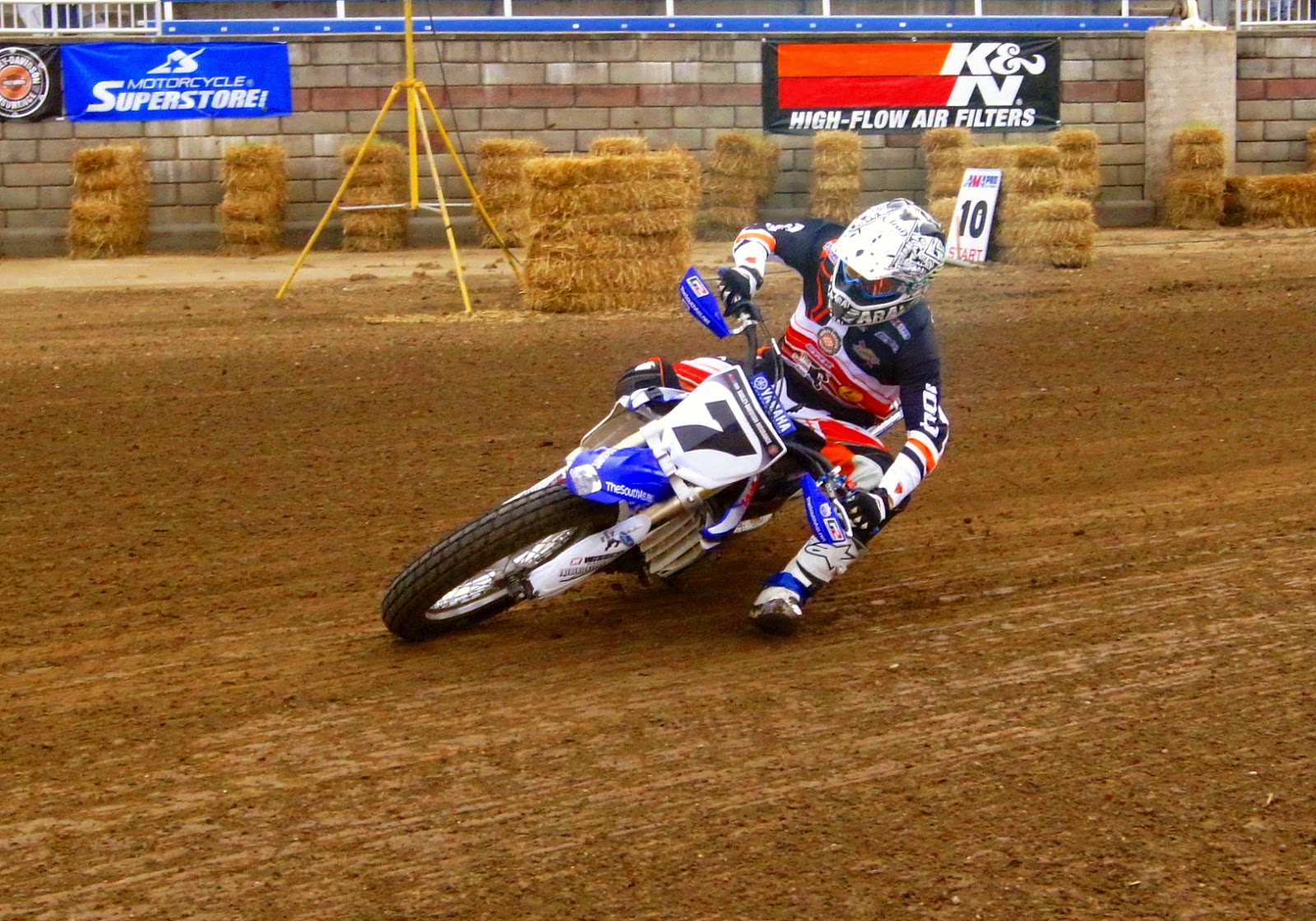 Sammy Halbert left Daytona last night not only leading the points, but as the current king of Daytona after taking fast time both evenings, winning the Dash on Thursday, grabbing 3rd-place in last night' Dash and finishes of 2nd-place and 4th-place for his two-night tally.

The King of Social Media came back to Daytona after missing last year's season-openers due to injuries and late last season due to injuries on a tear, and made the most of what has obviously been a strong off-season training regimen. Sammy and his brother Jethro were the only Yamahas in the top-10 last night, with Jethro finishing in 10th-place on one of Sammy's solidly-prepared mounts.

In the shot above from the final qualifying round at the Springfield Short Track on September 15, 2012, The Slammer guides his #7 The South Ass/Fredericktown Yamaha YZ450F into turn one.

Brandon Wilhelm took his first-ever win in the Pro Singles division in his third season in the class. The Aurora, IN. resident led all 18 laps in the Pro Singles main to take the win over first-year Pro Davis Fisher by just over .5 seconds.

In the shot above, Wilhelm on the #24J Wilhelm Racing/SD Racing Honda dices with Coy Matthews on the #30F Kings Kustoms/LZ Racing Honda during final qualifying in the AMA Pro Flat Track Pro Singles Championship at the Springfield Short Track on September 15, 2012.

A big shout-out and congrats goes out to Wilhelm for his first victory as well as to David Fisher, the newest member of the TJ Burnett Farms Racing team. Fisher, who has been contesting a lot of the All-Star and amateur races since last season for the Burnett tea, just turned 16 in the off-season and made his Pro debut at Daytona. Fisher leaves Daytona in 4th-place in the Pro Singles standings, eleven points behind early points leader Wilhelm (40-29 points.) Watch out for Fisher, Wilhelm and Thursday night's winner Ryan Wells this season as they should be the class of the field this year. 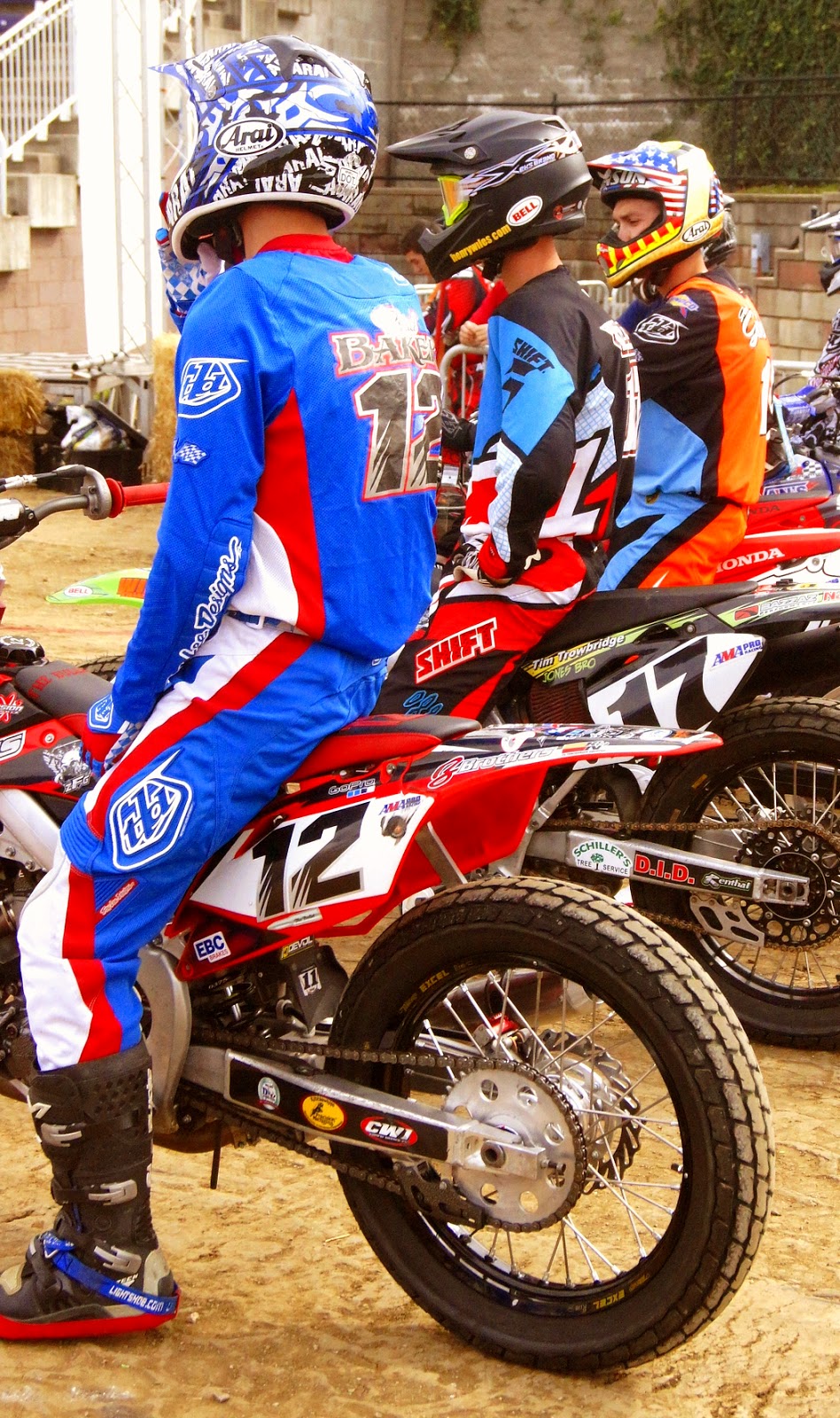 In what was a night, and even two nights of polar opposites, defending AMA Grand National Champion Brad Baker had a Daytona that I am sure he is ready to soon forget and get on with the racing in Springfield some 70 days down the road.

After being DQed on Thursday night for switching bikes for the main event (apparently when switching mounts his original mount didn't come from the required-by-the-rules back-up impound spot), Baker fought his way to a 4th-place finish in his heat and made the main for last night's show. He ended up with an 11th-place finish that saw him leave Daytona in 16th-place in the standings after the first two rounds.

Henry Wiles, however, did a super job of turning what could have been a disastrous opening two races into what may have been his best Daytona results ever. Daytona has never been kind to the King of the Singles Series, and this year started to look like things weren't going to change in that respect for Hammerin' Hank.

Forced to use his provisional after finishes of 7th in his heat and 12th in his semi on Thursday night, Hank worked his way up to finish in 6th-place after coming off the back row. Last night started to look like a carbon copy of that effort with a 7th-place in his heat, but he came back to score a 2nd-place finish in his semi to make the field.

From the middle of the third row, Wiles worked his way through traffic like a man possessed and carded another 6th-place finish, which sees him leave Daytona in 7th-place in the points. Not a bad Daytona for The Hammer after the way things started off for him!

In the shot above, Baker can be seen on his #12 Brothers Powersports/Schenk Racing Enterprise Honda alongside Wiles on the #17 Don's Kawasaki/DPC Racing KX450F. Jake Johnson on the #1 Zanotti Racing/Arai Honda is also shown as the three await the first round of practice at the final National held at the Springfield Short Track on September 15, 2012. 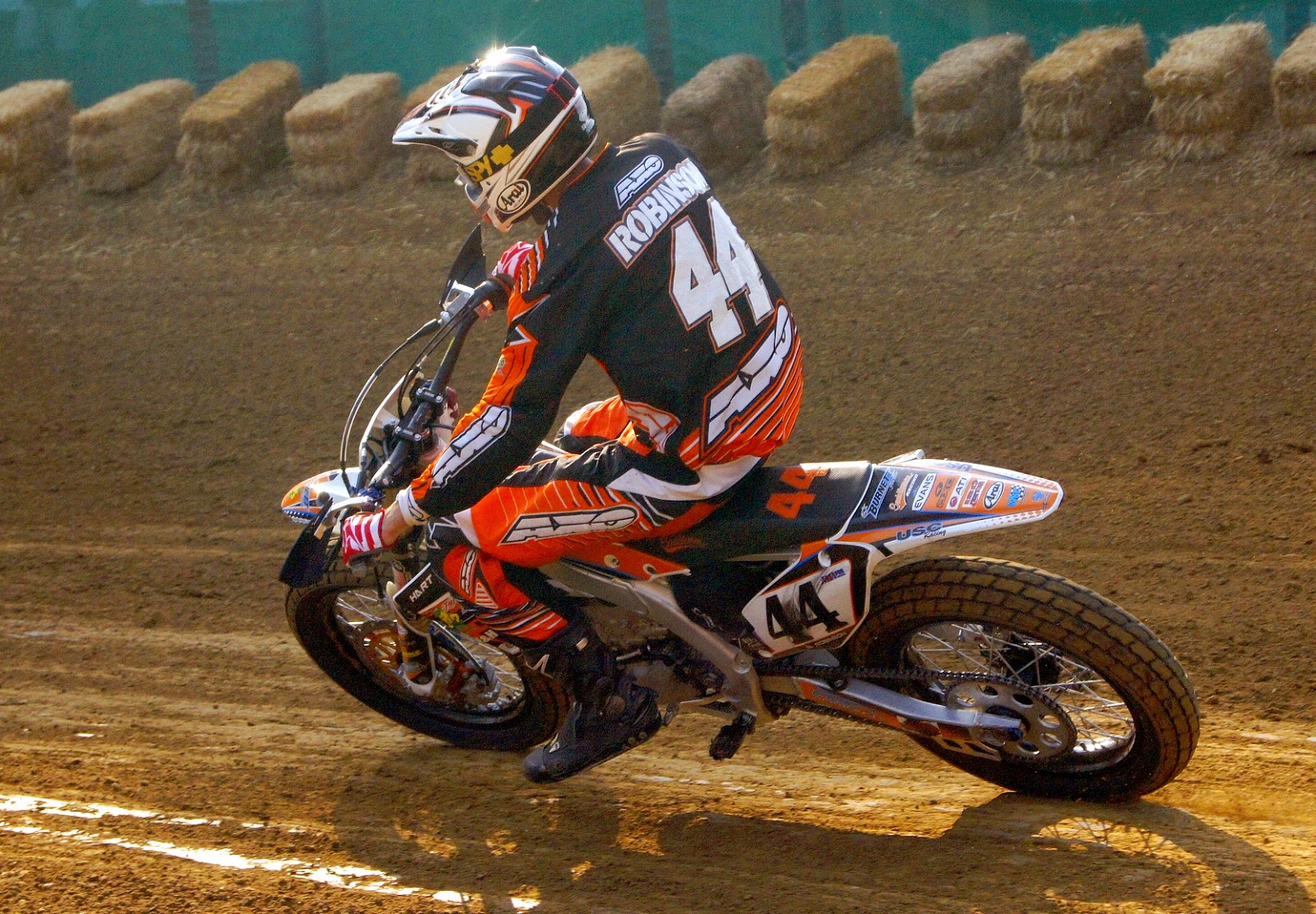 Without a doubt, a big honorable mention and very possibly the ride of the night (and event overall) was Brandon Robinson's come-from-behind romp to take a solid 5th-place finish in round 2 last night in Daytona.

After being involved in a lap 2 get off with rookie Expert Jake Constantine, BRob44 made a run through the field that was one of the highlights of the night. Robinson brought his #44 USC Racing Kawasaki through the field, picking off riders one by one after coming from the penalty line, and looked to get into the top-4 until he basically ran out of time in the 25-lap main. It was the stuff that legends are made of, and left him solidly in 4th-place in the standings after his previous evening's 3rd-place finish.

In the shot above, Robinson can be seen on the #44 TJ Burnett Farms Racing/USC Racing Kawasaki KX450F during round 7 of the 2013 AMA Pro Flat Track Grand National Championship on August 11 during the National main at the Peoria TT.

You can read the rundown from last night's race in Daytona Beach here thanks to Cycle News' Larry Lawrence, who was on the scene covering The Rolling Thunder Show's season-openers.

Full results from last night's round 2 are here thanks to AMA Pro Flat Track.

And again, a big shout out to AMA Pro Flat Track and their new venture, FansChoice.TV which brought us again some excellent coverage last night of the action on the limestone quarter mile in Daytona. Coupled with the live timing and scoring already available, it was great being able to see the action as it happened transpire on the track. Bravo!

And a great start to the season it was, as we also congratulate Kenny Coolbeth, Jr. and the Zanotti Racing team for a great win last night, and 3rd-place finish with Steve Bonsey. A solid start for the season to the Lloyd Brothers Motorsports/Parkinson Brothers Racing team with rider Jake Johnson, and all of the racers, sponsors and teams who make The Rolling Thunder Show the greatest racing on two wheels in the world that it is. What a great season opener!

So as we get ready for the 70-day lull before round 3 of the 2014 AMA Pro Flat Track Grand National Championship at the Springfield Mile on May 25, you can check out the press release below from AMA Pro Flat Track and see the official version of last night's romp on the beach.