Take a Peek Inside the Rizla Suzuki MotoGP Garage 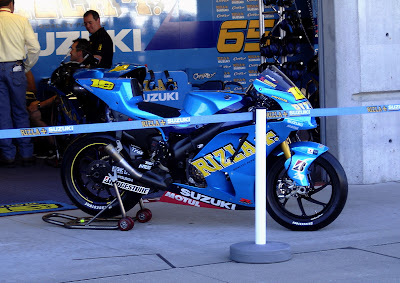 One motorcycle website that I have been finding to be very up-to-date and refreshing is the Ultimate Motorcycling.com site. I just came acrossed some of their stuff initially back in early spring, and have since found it a daily stop in the 'what to do, and what to check' list of regular and daily visits In my quests to gather any and all information related to the areas of motorcycle racing that I am familiar and confortable with, I've made it one of my 'must see' stops of late, even during the dreaded 'off time' in racing which occurs around this time of year where you search and surf for anything and everything to get you that fix to get you through until-in my case-the Dakar Rally kicks off on January 1.

The great guys at UM.com had this nice little video posted today that takes a quick look inside the Rizla Suzuki MotoGP garages during a typical race weekend. You can see from the amount of traffic and people involved (if for no other reason) why MotoGP is as high dollar as it is. Check it out here:

And while you are at it, take a peek at the official Rizla Suzuki MotoGP team website: