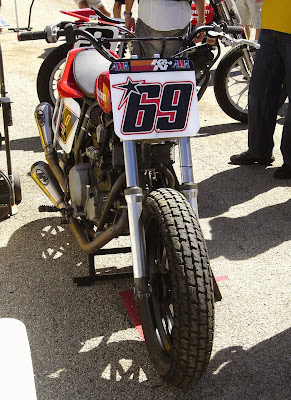 One of the Lloyd Brothers Motorsports Ducati Hypermotard 1098s sits outside the team's pit area adorned with the competition number of former '99 AMA Flat Track Rookie of the Year and '02 AMA Superbike Champion Nicky Hayden. Number Sixty Nine himself rode this particular 1098 on a few 'demonstration' laps at the Lucas Oil Indy Mile some eight days earlier, letting the great crowd on hand know that he was glad to be there and thrilled to be spinning it up again on the dirt mile oval. And when he was done, he let everyone in the house know that he'd 'be back someday' to the great series that is AMA Pro Flat Track Grand National Championship Series Racing.
Born, bred and brought up on the dirt tracks of the midwest, the Middle Hayden Brother, who also just happens to be the '06 MotoGP World Champion, was a regular competitor on The Rolling Thunder Show before the big bucks and the call of European and World Competition came knocking on his Owensboro, KY. door. But Nicky made it known on a Hot August Night in Indy where he REALLY wanted to be. And if you didn't believe him, the quasi-permanent smile on his face after turning those laps all but told the true story in itself. Hayden was home, and it sure felt good.
The evening's entertainment was also used to announce Mr. Hayden's resigning with the Ducati Corse MotoGP team for the next two years as well, with his new (and former with Honda) team mate Valentino Rossi coming into the team for the 2011 season and beyond.
But the evening couldn't have happened in this way, shape or form if not for the wonderful efforts of the Lloyd Brothers Motorsports team in pulling out one of Joe Kopp's back-up bikes and setting it up for Nicky to ride. The ENI/American
Agip/MotoConcepts-sponsored 1098 is a stable mate to the bike that Joe had taken to the win at the Arizona Mile in Prescott Valley in May, breaking an almost 12 year stronghold the Harley-Davidson XR750 had held in winning AMA Flat Track Grand National Championship Twins Series events. After the event, team co-owners Dave & Mike Lloyd had a special framed wall hanging made of the event that was made up of the original number plate that adorned that great 'demo' ride at Indy (signed by Nicky himself) and a shot of him spinning it up on the Indiana State Fairgrounds legendary mile oval.
That mounting can just be seen in this shot sticking out from the right side of the front wheel, as the bike was displayed at the Springfield Mile on September 5. You can see a better shot of that hanging by looking back at my September archives, because at that time just after the Springfield event, Dave and Mike took the wall hanging and put it up for auction on eBay.com and then donated the proceeds to the riders safety AirFence fund. Class act, and talk about giving back to the sport. And you won't find cleaner or more sano machinery anywhere. These guys know how to put a competitive race team together and make it work!
-------------------------------------------------------------------------------------------------

'06 MotoGP World Champion Nicky Hayden and the Ducati Corse MotoGP team put together a really sweet holiday video for all of the fans. Being the jokester that he can be, Nicky is seen 'sneaking' through the Ducati factory and 'test riding' some of the Italian company's wares that are left unattended. Man, now wouldn't THAT be too cool?!

So check this out and have a good holiday chuckle out of this one from Nicky Hayden and the Ducati Corse MotoGP team!

Thanks to YouTube, Nicky Hayden and Ducati Corse for this short holiday video:

And here is the link to Dave and Mike Lloyd's Lloyd Brothers Motorsports team, who put together the Indy ride for Nicky back in August, as well as Joe Kopp's mounts for the season:

Pass the word on and get the word out that LBM is still looking for sponsors to get back to the track for the AMA Pro Flat Track Twins Series Racing season in 2011.