AMA Flat Track: Prime Sponsorship Opportunity Available With Lloyd Brothers & Ducati, and Now Is the Time to Get On Board! 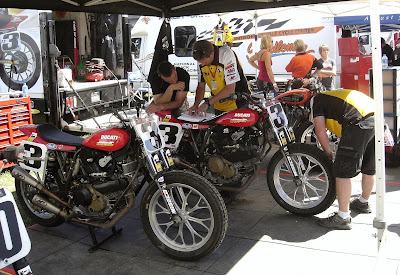 You might have heard of them. A little over seven months ago, Kopp took the Lloyd Brothers Ducati to the win at the Arizona Mile on the Yavapai Downs Mile, for the first win in the Twins Series since Rich King and Honda won at Joliet in August of 1998. The win that rocked the world in AMA Flat Track Racing!

Speaking with team co-owner Dave Lloyd this evening, he told us here at Stu's Shots that the team has provisions in place to bring Henry 'Hammerin Hank' Wiles back to the team to run all of the 2011 Twins Series events 'should the needed sponsorship become available.' Henry has ridden for the Lloyd Brothers squad in the past, having taken the team's Aprilia to an 'almost win' second place finish at Lima in June of '09. And with their background together and knowledge of how each operates, it would be a great fit for all to get the 2-Time AMA Pro Flat Track Singles Champion in the Ducati seat full-time for the upcoming season. With less then two months time to get plans together, Dave is 'cautiously optimistic' to be able to do so and feels there is a 'better then 50/50 chance' at this time that things will come together for Henry and the LBM squad. He did mention that should things NOT work out, Henry still has his 'options open' so that he can still put together something otherwise.

With the economy in the world, let alone just in the United States still in a flux, sponsorship in any sport or on any level is hard to come by. But this golden opportunity to hook up with one of the most professionally run teams (let alone professional looking teams!) in the sport of AMA Flat Track Racing, would be a great way for a company-or companies-to get on board with an established team, in an established sport that is growing and bringing fans back to the races again, as well as getting their name out to the motorcycle masses and racing fans. And with the team putting the Big Duc on the top of the box in Arizona, and then helping Kopp to finish second in the final championship standings, there is no doubt that there is no limit to what the possibilites could or would be for them in 2011, building and growing from their great season in 2010.

In spite of the 'supposed' lesser costs of racing in AMA Flat Track (compared to Nascar, AMA Road Racing, etc.), it still isn't cheap any way you look at it. Campaigning all Twins rounds this year except for Calistoga (where Kopp rode the Latus H-D XR) and Knoxville (which was rained out), the team spent $12K this year in diesel fuel alone for their transporter. And with sales of oils and lubricants down considerably in the 2010 year for their business, they just can't justify the spending to go racing without more sponsorship backing in the upcoming season. And for what this team has accomplished in such a short time (compared to the decades-long domination of the H-D XR750 in the series) it would be a damned shame to NOT see them back out on the track giving the XR750 a run for it's money in 2011. The level of professional the team displays and exudes on and off the track is unparalleled in any form of wheeled racing and can be seen in this or any shot I have displayed on Stu's Shots this year of the team. It is a well-oiled and fun atmosphere around this team, with winning in their sights and minds at all times in The Rolling Thunder Show.

So should you, or someone you know, be in the market to sponsor a winning and high-level and high-profile team in the great sport of AMA Flat Track Racing, then this shot to get on board with Dave and Mike Lloyd of Lloyd Brothers Motorsports, with 2-Time and defending AMA Pro Flat Track Singles Champion Henry Wiles twisting the throttle, is the golden opportunity to do so. And you'd be having one heckuva lot of fun while doing it, too!

You can contact Dave Lloyd via phone @ 614-402-3446 or via e-mail @ dave@lloydbrothersmotorsports.net. Or you can e-mail me @ stuman714@yahoo.com and I will not only be glad, but thrilled to death to be able to put you in contact with them.