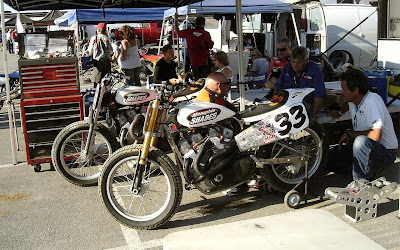 In this little ditty posted by Dean Adams over at SuperBikePlanet.com, JR Schnabel, National #33 in the AMA Pro Flat Track Series, is listed along with Bryan Smith #42 as a team member of the Monster Energy Kawasaki Werner Springsteen Racing team. Scouring the net proved fruitless on any more info, and with the AMA Pro Racing offices locked up for the holidays until Monday, there wasn't any way to get any type of official confirmation at this time. But it is pretty interesting nonetheless if you are a fan of The Rolling Thunder Show like I am and have been for years/decades.

In the link below, which pretty much confirms that AMA Road Racing will NOT see a return in '11 by Kawasaki, you can click on the picture, which appears to be a ticket for Kawasaki's press invitation scheduled as mentioned. On the enlarged ticket under the Monster Energy Kawasaki Werner Springsteen Racing header are listed BOTH Bryan Smith (who won the Indy Mile and Springfield Mile in late summer on the 650R-Werner built parallet twin) and JR Schnabel, who raced for the Memphis Shades XR750 team this year in the Twins Series.

This could be some really great news for the Werner Springsteen Racing team, who hooked up early in 2010 along with rider Bryan Smith to form a powerhouse team in the AMA Flat Track Series that proved to have the winning combination as the year went along. Adding another rider of Schnabel's caliber should make for a one-two punch that could see even more prominence in the series in the upcoming year!

Check it out and thanks to Dean at SuperBikePlanet.com: