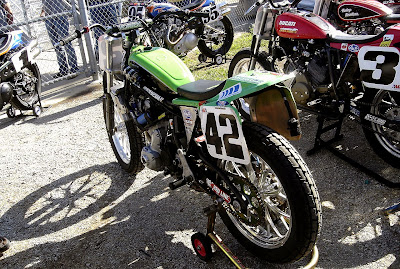 With diversity being the name of the game in AMA Pro Flat Track for the present and the future, I thought this would be a great way to actually show some of the differences in the series as it has been, is now, and will be in the future. For the 2o1o AMA Pro Flat Track K&N Filters presented by Motorcycle Superstore.com Grand National Championship season, we saw two
new winners in the series in the form of the Lloyd Brothers Ducati 1098 winning the mile in Arizona with Joe Kopp, and the Indy and Springfield event winner of Werner Springsteen Kawasaki's Bryan Smith. Along the way we also saw several wins on the schedule of the 'long may we run' Harley-Davidson XR750 by various teams.
For the first time in twelve years we saw two new winners in the Expert Twins Class, and also
the first time since August of 1998 that anything BUT a H-D XR750 won in the series. With the
homologation of new blood into the series, we are also now seeing teams campaigning KTMs,
Suzukis and Triumphs (again) in the best show on wheels in racing. And with the the 2012 season not that much further down the road, the whole Twins Series will be brought back under the '750' platform that long ago was the basis for the formula for the series. Which of course,
will open up many more models, and a few more brands to be able to compete in The Rolling Thunder Show.
Of course, this will affect a couple of teams that have been running the '1000s' this year and next, but the same brands they run now have several other, diverse models in the '750'
platform that will open up many other new doors for '12 and beyond. The great thing about all
of this is these are production machines being brought in to race under the AMA Flat Track rule book, machines which can be bought through your local dealer, while also allowing the long-running purpose-built XR to campaign the series as it has done for over 39 years (and helped to keep the series going along the way.)
Cycle World Magazine tested several of these machines after the season-ending round in Prescott Valley, and the video link below helps to show the then, the now, and the later in terms of the trail that AMA Pro Flat Track is blazing in the great turnaround in the sport. Things are bright and looking brighter with the series, and for anyone of us that thought you couldn't steer the Titanic away from the iceberg, if you are like me, you're finding out that anything is possible with good direction and a good ship's captain. And coming from a long-time fan of the series, I can tell you that AMA Pro Flat Track has it all.
Read and view on, and if you are so inclined, leave a comment on what YOU think of the new AMA Flat Track and it's current and future direction. Inquiring minds want to know!
Thanks again for coming by to share your time with us here at Stu's Shots. Door's always open and we're always glad to see new and returning faces and friends!
-------------------------------------------------------------------------------------------------
Cycle World Magazine's Mark Cernicky tested a few of the diverse machines that are now homologated to compete in AMA Pro Flat Track after the season ending round at Yavapai Downs. Mark managed to put a Honda CRF450F into the Pro Singles main event in Prescott Valley in October, so he does know a thing or two about how to slide a flat tracker. You can read about those exploits here:

Here's where you can check out Mark's 'spin' on riding Joe Kopp's Lloyd Brothers Ducati, Bryan Smith's Werner Springsteen Monster Energy Kawasaki, and Kenny Coolbeth, Jr.'s Screamin Eagle Harley Factory XR750, among others, which is a great 5+ minute video on taking a few of these milers out for a dash around the park: