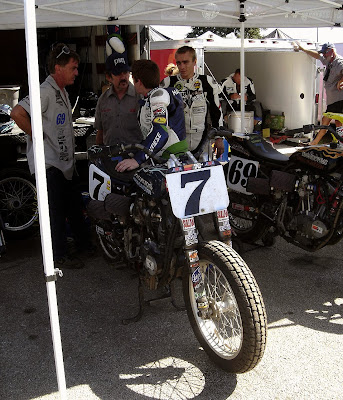 Yesterday's column as written by Sammy and posted yesterday at CN.com was an interesting read in that the younger of the Halbert Brothers squad is STILL tearing them up on the track, winning the Stockton Mile again, and also racing in the Eddie Mulder series on the West Coast. He has also been running some track days in Florida on a road racer, and it looks as if he may possibly be running some WERA events next year.

But what I found to be the most interesting part of the column, especially coming from someone who has been running the Harley-Davidson XR750 for so long in the Expert Twins Class, was he mentioned he is in the process of putting together a 'non-Harley twin' for the big mile tracks. Stopping short to confirm exactly what brand of motorcycle he is building, he did say that he was putting something together to give him a leg-up on the Werner Springsteen Monster Energy Kawasaki of Bryan Smith, which won both the Lucas Oil Indy Mile and the Springfield Mile over consecutive weekends at the end of the summer.

This really should add even more excitement to the AMA Pro Flat Track Series for the upcoming season, especially considering the level of expertise that Halbert has and his ability to adapt to just about any type of conditions on-track. You can read what he has to say here: