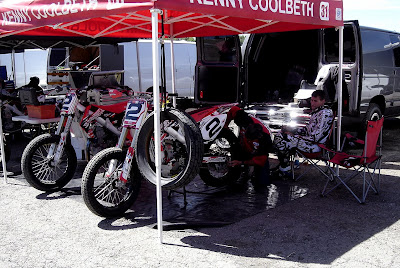 With Kawasaki Heavy Industries now making one of the more dominant 450s on the market today, this should prove to be an interesting move in putting The King of Cool on equal equipment to that of 2-Time AMA Flat Track Singles Champion Henry Wiles, who won four of the six Singles Series events during the 2010 season. Coolbeth has reportedly been practicing
on the Green Machines for the last couple of months and is expected to make his opening assault on the AMA Flat Track Grand National Singles Series in March at the opening rounds in Daytona.

The always on the scene Larry Lawrence of The Rider Files.com has also gotten back together with Cycle News.com's rise from the molten fall-out late this summer, and he posted this great interview with Kenny Coolbeth late yesterday afternoon:

AMA Pro Flat Track posted this official press release of Coolbeth's signing with Chaplin Kawasaki as well, and it has another shot of K.C., Jr. practicing on one of his new KX450s:

Here is the link to Kenny's new sponsor, Chaplin Kawasaki. Check them out: