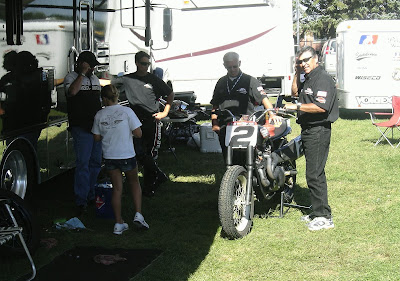 As previously expected, Kenny Coolbeth, Jr. will be returning to the Screamin Eagle Harley-Davidson Motor Corp. for the 2011 AMA Pro Flat Track Grand National Championship Series. The King of Cool, who has been with the Harley Factory Team since the '06 season according to AMA Pro Flat Track's rider bio on him, won the Canterbury Park Mile this year, one of the just announced returning venues for the upcoming 2011 season, and finished 5th in the final 2010 GN Championship point standings. He also garnered five additional podiums in the '10 season.

Coolbeth, who is currently 11th on the all-time wins list in AMA Flat Track Grand National Championship Series Racing with 25 wins, had announced late last week he would be taking his Singles Series program over to Chaplin Kawasaki after being with Bettencourt's Honda for at least the better part of the last decade. He has finished in the top 10 in AMA Flat Track Series Racing season-ending point standings every year since 2000.

Paul Carruthers has the story at Cycle News.com and you can read the great news below.

Congrats to Kenny and it will be great to see you back on the Factory H-D XR750 again in 2011!