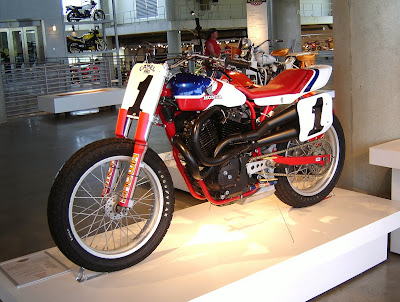 The RS750 also won championships with Ricky Graham in '84 (Honda's first championship in GNC competition) and again in '93 with Ricky G doing the riding and Johnny Goad doing the tuning on a privateer effort that not only caught the Harley-Davidson Factory Team off guard, but the rest of the flat track community as well.

With Harley-Davidson and their legendary XR750 having all but totally
dominated the big tracks in The Rolling Thunder Show since the mid 70s, Honda was loved and reviled at the same time for their usual method of assault on racing-come in big, spend tons of dough, win it all, and pack up and go home. Nonetheless, the largest motorcycle manufacturer in the world still made what was considered a most preeminent statement against what was-and has been since-the most dominant and commonly preferred machine of use in AMA Flat Track Grand National Championship Series Racing.

And to this day, no other has dared to set foot in the arena of American flat track racing to take on the long-standing Milwaukee breed. With Kawasaki taking and making a great step in winning at Indy and Springfield this year, and with the horizon of the '750'-only platform for 2012 and beyond just ahead, could we possibly be seeing history being re-written some 30 years later? Only time will tell, but one thing is known. Anyone that knows or has known AMA Flat Track over the years will tell you this........what Honda did was change the course of history in flat track racing (and they did it with a big WOW!), albeit only for a short chapter in the long story of American flat track racing.

The company, which specializes in aftermarket exhausts for the cruiser industry decided to build a replica out of Honda's new Shadow RS750 that just recently became available in the U.S. for the cruiser market. In the process, they put together what this writer thinks is one of the neatest builds honoring AMA Flat Track Grand National Championship Series Racing ever seen.

Read and view on here:

NOTE: According to Cobra's website, this bike is also slated to appear at the other IMS shows including Chicago, Cleveland and New York. If you want to see it in person, make your plans now!