Eric Bostrom Talks About His Return to AMA Superbike in 2010 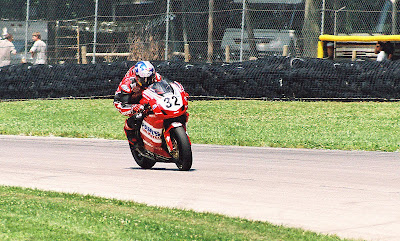 Eric Bostrom wrestles the #32 Ducati Austin/Parts Unlimited/Michelin-sponsored 999R out of turn nine at Mid Ohio during the Honda Super Cycle Doubleheader Weekend round of the AMA Superbike Series in July of 2004. Bostrom spent two years with the team in '04-'05, scoring three wins in the premier class series and finishing 7th and 3rd respectively in the year-end standings.
Eboz' first foray into the AMA Superbike Championship Series came in '99 as a replacement for then-injured rider Miguel Duhamel on a Team Honda RC45. He went on to ride for Team Kawasaki in 2000-2003, and then moved to Graves Yamaha Motorsports for the '06-'08 seasons.
Returning mid-season this year on a CycleWorld/AttackPerformance/
Yoshimura Suzuki GSX-R1000, Eboz was a welcome sight in the paddock and on the track, and showed he still has what it takes to run in the premier class, albeit a bit rusty. That should change with more seat time for this fine rider. As with many riders at this critical time of year, Bostrom remains 'unsigned' for the 2011 season, though regular rumors and speculation has him returning with Cycle World and Attack, but on one of the new Kawasaki XZ-10Rs.
Silly season this off-season is much worse and more sparse, with the economy dictating who can and will be able to do what in the series for the upcoming season. And with the motorcycle industry in a state of quandary over the downturn in the economy, a lot of teams are being forced to wait or not race at all in the upcoming season. Many riders are without a team and not even knowing what the future may hold. Daytona still has tire tests scheduled with Dunlop and several teams this month and next to work out settings for the annual season opening round in March. And no 'full' schedule has been released as of yet, although 2011 season rules have been posted.
-------------------------------------------------------------------------------------------------

Eric Bostrom returned to the track in 2010 in the AMA Superbike Championship Series after sitting out the 2009 season while tending to his and his brother Ben's real estate interests in South America. Cycle World Magazine, Attack Performance and Yoshimura Suzuki put together a very sweet and potent GSX-R1000 for Eboz, and mid-season he was back at it again for some select races in the 'new and improved over 2009' AMA Superbike Series. After a break from racing, it was great to see the younger Boz Bro back on track and in the thick of things again.

Although a season-ending crash that tore his leg up pretty badly took him out of the season prematurely, the former series two-time runner-up sounds stoked to be back and has his sights set on the 2011 season, and at last report was healed up and riding his bicycle again and in training. However, just like what a lot of the riders are going through, Eboz is currently still 'unsigned' for the upcoming season, and at last word was on-track at Las Vegas at the beginning of November running a Kawasaki ZX-10R through it's paces during a WERA event.

Eboz got a chance to catch up with Matthew Miles at Cycle World and talk about his return and how the 2010 season went, and you can check it out here: