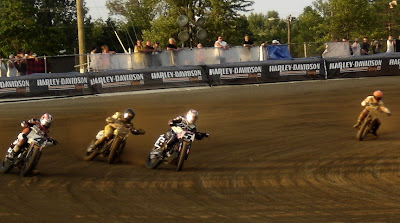 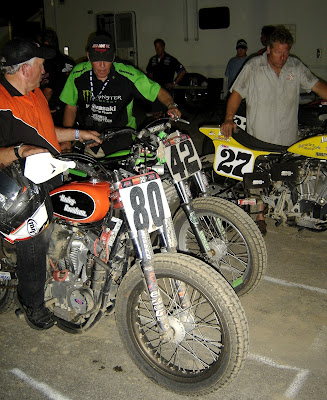 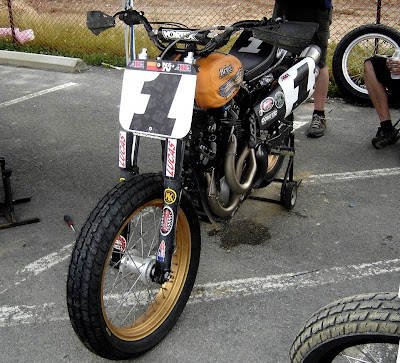 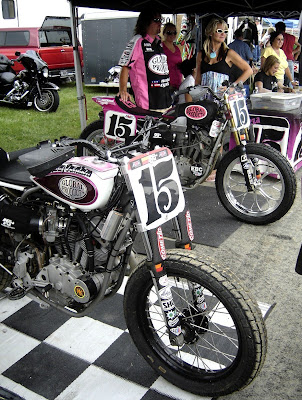 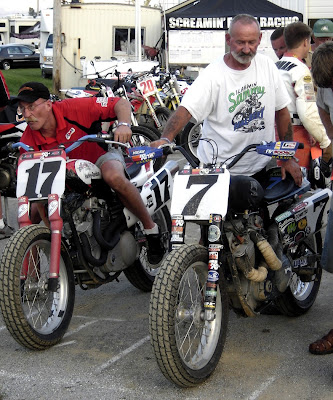 The best racing show on wheels had one of Kenny 'The King' Roberts' racing proteges topping the box on Saturday night at the initial running of the Calistoga Half Mile at Calistoga Speedway in great AMA Flat Track racing action.

Steve Bonsey, who not too long ago was running in the GP wars in Europe, broke his cherry and won his very first AMA Flat Track event on the fast half mile in Northern California. Topping an all-star crowd that included Chris Carr, Jared Mees and Jake Johnson, among others, Bonsey wowed 'em in the final to run down and pass early leaders Carr and Sammy Halbert to win his first AMA Pro K&N Filters sponsored by Motorcycle-Superstore.com Grand National Twins main event at round nine in Calistoga. Even more spectacular for this young man is the fact that before Saturday evening's win, his best finish in an AMA Flat Track twins event was a 10th place. Now that's what I call a quick learner!

Needless to say, I was wrong again in predicting that as many as 40-45 riders would try to qualify for this only west coast event on this mid-summer swing of the series. Only 32 riders timed in for the twins main, but nonetheless the track prep and promoter involvement made this a great evening for all in attendance. Being as what the economy still is, for fans and racers alike, 32 riders for a single west coast swing in the schedule is really pretty good, and nothing to be ashamed of. And reports from those on the scene say the place was packed and the crowd on hand was very enthusiastic. Obviously another great showing for Mike Kidd, Steve Morehead and the entire AMA Pro Flat Track Racing crew. Track prep was said to be one of the keys to bringing off a great race, along with the extra work said to have been put in by the race promoter to put fans in the seats.

With a swing back to the far east--Hagerstown, MD., to be exact--next up on the schedule the series will resume on the Hagerstown Speedway Half Mile, Saturday night, August 7th. With the half-way point in the schedule now officially passed, watch for the action to get higher and mightier on the track as the best men (and women!) of AMA Flat Track duel it out for the overall AMA Flat Track Grand National Championship right down to the wire at the last event of the season in Arizona.

Stay tuned, as this show's chugging along at a pretty good clip, and if you don't jump on now you're gonna miss it.........

You can check out all of the 'official' stories, pics, and standings below to get the full read on who's who and what's what!

Story and pics from the Calistoga event thanks to Bart Madson and the great folks at Motorcycle-USA.com:

The official photos of the Calistoga event thanks to AMA Pro Flat Track and Dave Hoenig from FlatTrakFotos.com: