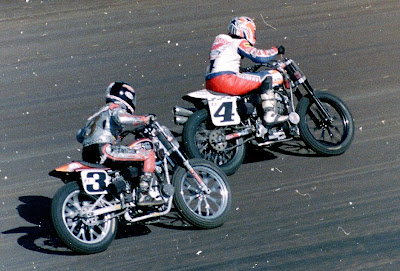 As was reported in the race rundowns, Kopp's Latus/Lloyd/Egip H-D XR750 suffered a broken swingarm bolt that caused Joe's heat race to come to a quick end into the turn one fence. Thankfully that fence was covered well with airfence (bravo to the airfence and safety people and to Mike Kidd and Co. at AMA Flat Track) and Joe was able to get up and race his back-up Latus X-R into the main via winning the second semi.

I've posted both versions of the video below for all to check out. I'm not trying to get on a crash 'n burn video roll thing here, as I am not about showing crash videos for the purpose of thrills and oohs and aahs. More so, I am trying to help highlight what was a freakish mechanical failure on the Joe Kopp/Latus/Lloyd machine and how good of a job the barriers did in cushioning a fall at 70+ MPH, not too mention how good of a job Joe did in riding it out into the fence.

Short version--and thanks to ScoobyDoo2 who was in attendance at Calistoga and posted these over at Vimeo:

Long version with some heat action before the crash: