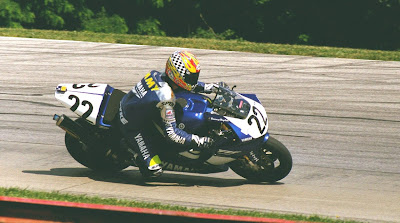 Tommy Hayden, who until five months ago had not tasted victory in the premier AMA Superbike Series, won his season, and career, fourth race today by stealing almost-certain victory from the grasp of Pat Clark Motorsports Ben Bostrom in a last lap pass that sealed the deal by just .005 seconds at the checkers. Tommy Gun, who led the first three laps to go along with the last of the 23 lap race, kept it close all day on his Yoshimura/Rockstar/Makita/Suzuki GSX-R1000 along with laps-led leader and current points leader Josh Hayes on the Graves Motorsports YZF-R1 and Bostrom on his PCM R1. Tommy now only lies one point behind Hayes (third place today .303 seconds back from Tommy) in the race for the AMA Superbike Championship after 14 of 19 races, 333-332. Bostrom moves up to fourth in the series standings with 249 points while today's eighth place finisher Jake Zemke on the National Guard/Jordan Suzuki still lies in third in the hunt with 273 points.

Of note for some of the other finishers, John Hopkins had a fine race going with the leaders in his return to action on the M4/RoadRacingWorld/Monster Energy Suzuki. The Hopper had kept the leading trio in sight, just over 3 seconds adrift in the fourth spot, when he crashed out (apparently unhurt) on the 19th lap. Larry Pegram brought his Foremost/Pegram Racing Ducati home in the fourth spot after Hopper's misfortunes. Eric Bostrom on the Cycle World/Attack/Yoshimura Suzuki brought it home in the seventh spot, to equal his best result since his return to action at Mid Ohio in mid-July. And Aaron Yates, who returned to the track this weekend after an almost-five month lay off due to injuries, did not start the event due to unknown reasons as of this writing.