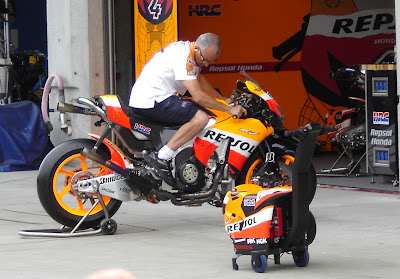 David Emmett of the always excellent MotoMatters.com has a short interview over on his site about the current perils of the Repsol Honda MotoGP team in being able to run, or not, three full factory teams for the 2011 season.
With the recent signing of '07 MotoGP World Champion Casey Stoner away from Ducati, and Dani Pedrosa having another year on his contract with the Repsol factory squad, Honda is left in a perilous position (in today's economy) of having to run three full factory squads for next season. Not that the 17 bike grid couldn't use some extra company, but the economics of running as many as seven total bikes in the series is pretty daunting in the least (including the satellite teams.) Even with the deep pockets that Honda has always been known to use over the decades, this isn't your father's economy. And for the millions that it takes to run a squad for a 17-18 race season that traverses the glove several times throughout the course of the season, is it or could it still be worth the investment? Only the Shadow knows.........check it out below to see what Dovi's position is before the MotoGP Silly Season rings the bell in Brno late Sunday afternoon.