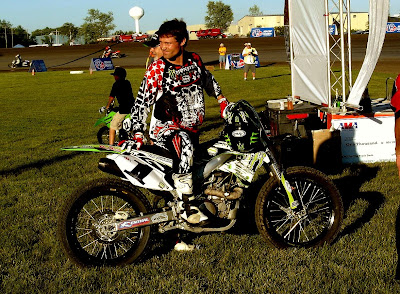 Henry 'Hammerin' Hank' Wiles watches the competition in heat two during short track action at Gas City in June of 2010 after having won heat one, and eventually going on to the final win at the Gas City/I-69 Speedway.
Wiles rode his Monster Energy/Don's Kawasaki/Shift Racing/Jones Bros. #1 machine to a very convincing sixth-straight victory at Peoria Raceway Park in round 11 of the AMA Pro K&N Filters presented by Motorcycle-Superstore.com Grand National Championship yesterday afternoon. Henry had a perfect day in setting fast time (in both qualifying sessions to time in at .361 faster then second fastest man Bryan Smith), winning his heat (the fastest of the day good for pole position), the dash for cash (winning by close to 1.5 seconds) and the GNC Singles final event. The only lap he didn't lead was the first lap of the dash, and he won the main by over 11 seconds on second-place man Jared Mees and takes a very strong 113-92 point lead in the Singles Championship over Joe Kopp to the now-final Singles event at Springfield on September 4th.
Kopp still holds the overall GNC points lead over new second place man Sammy Halbert by 17 points, 208-191. Jake Johnson rounds out the top three with 190 points by virtue of his fourth place finish yesterday. Wiles sits in the fourth spot overall with 188 points after his fourth win of the season, his third singles win on the year.
If anyone can stop Hammerin' Hank, they weren't in the ballpark yesterday at Peoria. Barring any major problems he should walk away with another Singles Championship again in 12 days time. Look for Henry to win again at Springfield in grand style as it sure doesn't look like anyone has anything for him in the Singles Championship this year. Not that they aren't trying! The man has it dialed on the little bikes, and if his program on the twins ever gets to the point as what his singles program is, look out.
------------------------------------------------------------------------------------------------- 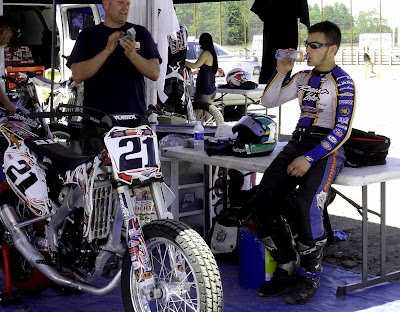 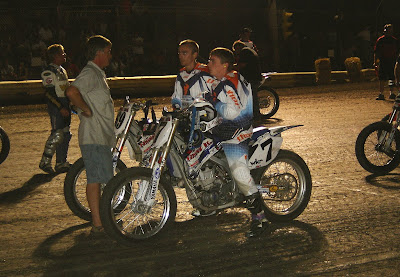 AMA Flat Track racing brothers Jethro Halbert/#69 and Sammy Halbert/#7 sit and wait out the red flag break in the running of the Gas City/I-69 short track event earlier this summer.
Jethro made the cut at Peoria yesterday according to qualifying, but didn't actually race the main and as of this writing I haven't heard anything official on that.
Brother Slammin' Sammy, however, rode his Woody Kyle Racing/Fredericktown Yamaha/Kings Kustoms/Fluid Suspension-backed Yamaha to a fine and hard-earned third place finish at the Peoria arena. The '09 'mythical' overall GN Champion qualified in 12th overall for the day and took third in the first heat behind Henry and Jake Johnson to round out the podium. The 'little man' with the iron will and iron throttle hand is making a great show of trying to run down Joe Kopp in overall GNC points standings. After yesterday's event he sits in second place only 17 points down on leader Smokin' Joe. Sammy also sits in the fifth spot in the Singles Championship with 73 points.
With his solid finishes this year, to go along with his season-opening short track win at Daytona, Sammy has been right there in all of the events this season. With four miles, one half mile and one short track left in the series run to the championship, if anyone tips the apple cart it's most likely to be this man. Look for this youngster to just keep on getting better and better, and if something, or someone, goes amiss during the rest of this season, he will be right there to get the better of them should it happen. Indy this Saturday could be where those apples get jostled around. Stay tuned!
-------------------------------------------------------------------------------------------------

Henry 'Hammerin' Hank' Wiles simply outclassed the field yesterday in the annual running of the AMA Flat Track Peoria TT, winning his sixth straight event at the famous outdoor arena, and leading just about every lap of the day in the process. Henry won the final by 11+ seconds over second place man Jared Mees, and Sammy Halbert rounded out the podium in round eleven of the AMA Pro K&N Filters presented by Motorcycle-Superstore.com Grand National Championship. Wiles is in position now to go after Chris 'The Price of Peoria' Carr's eight straight wins at Peoria Race Park, let alone looking at the overall 13 wins the former 7-Time Champ has there. But that's for another time.

Hammerin Hank couldn't put a wheel wrong yesterday, and in the process of winning it all and leading just ABOUT all of the laps he ran at Peoria, took a commanding lead in the AMA Flat Track Singles Championship over second place man Joe Kopp 113-92. Look for Hank to wrap it up at Springfield in twelve days with not only a win, but another Singles Championship to boot. With the now-canceled/postponed Arizona short track out of the season's equation, Henry could cruise to the Singles title. But don't look for that to happen as he keeps his string intact in winning at Illinois (and Indiana after his June Gas City win) singles events. Four miles, one half mile and one short track are all that is left in the season now, and the title for the singles will come down September 4th in the Capital of the Land of Lincoln. Let alone the Capital of AMA Flat Track racing!

But first up is The Indy Mile this Saturday, August 28th. There should be a big time huge crowd there again in the third running of the legendary pairing of the Red Bull MotoGP Indy round along with the best show on two wheels, the AMA Pro Flat Track Grand National Championship.

Stu's Shots will be there to highlight all the action and to take it all in. This is getting better all the time!

Here is Matt Davidson's take from Motorcycle-USA.com on the Peoria event yesterday, with a few pics from the event as well:


AMA Pro Flat Track has this report on the Peoria event as well as the overall and singles points round-up with eleven overall events run, and one singles event remaining in Springfield (with the cancelation/postponement of the Arizona season-ending ST) on Saturday, Sept. 4th:

And here's a nice little gallery of shots from Dave Hoenig over at the AMA Pro Flat Track site:

Here is the link to the Peoria event from AMA Pro Flat Track. Some of the results (main/combined points standings) haven't been updated on here as of this post:

Dave Hoenig at FlatTrakFotos.com has his results up (and will soon have photos from Peoria up as of this writing) right here:

Dave also filed this report for the bible of motorcycle racing news, CycleNews.com that includes full results from all the races on Sunday at Peoria:


And the great Chew and Mia from over at FlatTrack.com have this great gallery of shots that they put together from Peoria. Great job as always guys and thanks again!