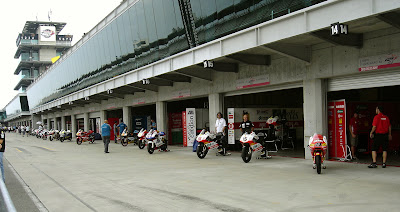 The IMS Pagoda looms overhead in the background during the Red Bull IndianapolisMotoGP race weekend in August of 2009, during the pitwalk to see all of the exotic European machinery as it is readied for battle for the next three days. Teams set up their bikes in front of the garages for the fan's viewing as some work in the garages, while others stand around enjoying the camaraderie of the other team members, and in some cases the public while viewing the wonderfully prepared machines. This is as close as you get to the big boys on this level.
What has been pretty much another badly-kept secret is the re-signing of the sprawling Indianapolis Motor Speeday to an extension of it's contract with Dorna to continue on hosting the Indy round of MotoGP. The final details in the overall MotoGP schedule are being worked out and it sounds like an official announcement COULD come here this weekend, but if not for sure within the next several weeks.
The Hulman Family will play host again this weekend to the premier motorcycle racing series in the world at the World Capital of Racing in Speedway, IN. From a fan's point of view, the hosting of this event has been unparalleled and has been welcomed with open arms and a lot of positive comments over the course of the last couple of years from those that venture from afar to attend this grandeur event. If the cards play out the way things should be, IMS will host the MotoGP circus again in 2011 and most probably beyond.
-------------------------------------------------------------------------------------------------

With just over 14 hours before the gates open on the sprawling Indianapolis Motor Speedway for the 3rd Annual running of the Red Bull Indianapolis MotoGP round, good news came down the pipe earlier today that, for the most part, was probably another one of those worst-kept secrets in MotoGP.

According to the news from the Indianapolis Star Newspapers, The Brickyard is close to making an official announcement, along with Dorna (the rights owners for MotoGP) that they will be extending the contract for 2011-and most probably beyond-for Indy to continue hosting the premier motorcycle road racing event in the world at the famed Speedway, IN. speedway.

After a rough start in 2008 in the initial running, IMS also got to host the remnants of Hurricane Ike that caused havoc for the fans, racers and the Yamaha tent in the infield. Several people were injured slightly when 60+ mph winds hit the massive 1000+ acre facility, causing the main Yamaha tent display to pull up stakes-so to speak, and for fans to have to seek shelter from those winds blowing up their bums. Thankfully no major or permanent damage was done, especially to the fans. The MotoGP race itself was cut short by eight laps due to crosswinds on the track that caused some major problems for the premier class, but again no major crashes or injury. The 250CC class was the only real loser in that the race had to be scrapped due to time constraints after waiting out the storm that hit Indy in the late morning/early afternoon of the final day's event. 2009 saw rain on the first free practice day on Friday of the event, and the rest of the weekend was wonderful. The forecast for this weekend's 3rd Annual running is expected to be just about perfect.

In what should be a wonderful weekend for fans, racers, teams and sponsors alike, the 3rd running of the Red Bull Indianapolis MotoGP round will be about fun, speed and excitement. With all of the vendor displays in Gasoline Alley as well as in the infield, the pitwalk on Friday morning, and the chance to at least see your favorite rider-or riders-from closer then your 52 inch flat screen, there is something for everyone at this great event that is hosted by the World Capital of Racing, the Indianapolis Motor Speedway.

And that doesn't even take into account all of the other outings in/around the area. This is only a short sampling of all the goings on:

Lawrenceburg Speedway in Lawrenceburg, IN., just west of Cincinatti, is hosting a pro short track event on Friday evening, Mid America Speedway at the Marion County Fairgrounds on the southeast side of Indy is hosting the Speedway Championships, AMA Endurocross is at the Pepsi Coliseum at the Indiana State Fairgrounds, and the XDL Freestyle stunt show is downtown at the War Memorial.

But the biggest 'race within the race weekend' is the Indy Mile on Saturday night as the AMA Pro Flat Track rolling thunder show rolls into town for a repeat performance from the last two year's return to the famed Indiana State Fairgrounds mile dirt track.

That will be the race to see and we will be doing a preview of the Indy Mile before tomorrow night here as well on Stu's Shots.

'08 winner Chris Carr and '09 winner Kenny Coolbeth, Jr., will be on hand to try and steal the bacon at 140 MPH on the Indy Mile straightaways. The best show on wheels will not and does not dissapoint and AMA Flat Track Manager Mike Kidd and his team will be there to set the bar as they have done again and again the last few years in bringing this sport to the forefront again.

So read on below of the good news about MotoGP returning again after this year to Indy and the logistics involved for it to happen, and enjoy everything there is to do this fine weekend. It's going to be a good one!