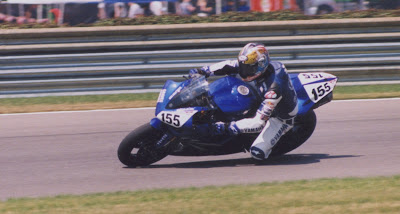 Ben 'Captain America' Bostrom stole the pole this morning in the closing minutes of qualifying to outduel his former team mate Josh Hayes in AMA Superbike Series action at Virginia International Raceway. Riding his Pat Clark Motorsports/Palms Resorts/Las Vegas Speedway Yamaha R1, BBoz waited until the last few minutes of second round qualifying to knock Josh Hayes into the second spot on the grid by just .246 seconds, after exchanging the top spot with him through out the session. After winning the pole at Laguna in July, and going on to win the event there as well, Ben's second pole in a row this year has him on a mission as the season winds down. He qualifed at 1:24.527 with an average speed of 95.828 MPH to Hayes' 1:24.773 and 95.550 MPH average. Official results are below.

Also of note for some of the other notables in qualifying this morning, showed little brother Eric Bostrom on the Cycle World/Attack/Yoshimura Suzuki GSX-R1000 slotting into the front row in the fourth spot at 1:25.315. This being only his third event back on the grid after a 1 1/2 year layoff, EBoz is obviously getting closer to his form of old before sitting out the series during the 2009 season. And Aaron Yates, in his return to the track for Jordan Suzuki after breaking his leg at the Fontana round in late March, qualified on the second row in the eighth spot at 1:25.961. Look for Aaron to be back in the mix real soon once his leg gets stronger and he gets back into full swing on the bike again. Never count out Double A Ron.
Tommy Hayden continues his quest for the AMA Superbike Championship by qualifying his Yoshimura Rockstar Makita Suzuki GSX-R1000 in the third spot on the front row with a time of 1:25.247 and returning RoadRacingWorld/Monster Energy pilot John Hopkins, out since the early part of the season after having surgery on his much-altered wrist, qualified his Suzuki GSX-R1000 in the seventh spot at 1:25.748 for the weekend's events.


The official results of final qualifying are listed below as are the links to the weekend's events and the AMA Live Timing and Scoring.

This has proven to be a great addition and update to the site. Bravo to the AMA Pro Racing team (thank you Kathy Hoenig!!) for stepping up on these results!