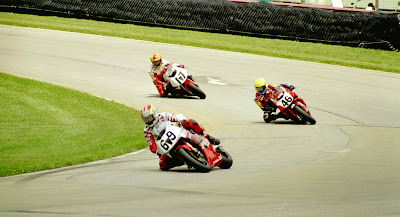 Nicky Hayden, the 2002 AMA Superbike Champion and the 2006 MotoGP World Champion, unveiled a new lid he will be wearing for the upcoming weekend while riding his Marlboro Ducati Desmosedici GP10 in round eleven of the MotoGP World Championship. And it looks pretty awesome in paying respect to the greatest race course in the world.

Unless you have been living under a rock, this upcoming weekend is the 3rd Annual Red Bull Indianapolis MotoGP round being held at the World Capital of Racing, the Indianapolis Motor Speedway and it's sprawling mecca. Over 100,000 people are expected to walk in and out of the gates of the most famous race course in the world this weekend to come and see the boys get it on the 2.6 mile road course that has hosted the MotoGP circus since the initial 2008 outing at IMS (which also hosted Hurricane Ike remnants for those of you who remember 60+ mph winds blowing up your bum and darn near taking down the big Yamaha tent in the infield housing Yamaha streetbikes, demos, and the Boz Bros Bike Show). The weather outlook is good for the weekend in Indianapolis and the racing should be even better if the last two years have been any indication.

Here's a few pics of Nicky's new lid for the weekend which does a wonderful job of celebrating the Centennial Era at IMS, incorporating the bricks at the start/finish line, the new pagoda built to resemble and pay homage to the original pagoda from the 1950's, as well as the track's now-over 100 year old lineage. If you are a fan of all-things Indianapolis, you won't be dissapointed. And if you aren't, sorry for your rotten luck, cuz this hat is way cool! Go Nicky 69!


Check it out here thanks to Nicky's official website and enjoy: