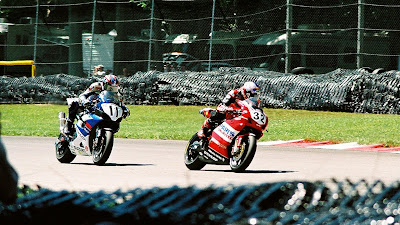 Ben Spies is looking to step it up (again?!) at this weekend's running of the 3rd Annual Red Bull Indianapolis MotoGP, round 11 of 18 of the 2010 MotoGP World Championship. Having already put it on the podium back at the Silverstone round and then qualifying on the front row at Brno two weeks ago, Ben is making the U.S. fans and his Monster Energy Yamaha squad quite proud this year. And including this weekend here in Indy, we still have eight rounds to go before he most probably is crowned the 2010 MotoGP Rookie of the Year. Not that I'm trying to throw a jinx at anyone now. Quite a performance for the satellite Monster Energy Yamaha pilot and squad to say the least.

Elbowz is looking forward to racing on U.S. soil again and also to being back at Indianapolis for his second go-around at the most famous race track in the world. Having tire tested here and competing in the first running of this event some two years ago, Ben does know the nuances of the REAL world center of racing and it's multi-surface layout. With the MotoGP track being completed in the early spring of 2008, this track does offer a variety of surface-types where everything from the original oval, the changes made from when the Formula One parade was here, and it was constructed and pieced together (so to speak) from different mixes of asphalt, making for the surface-types meeting together and offering different grip levels for traction. There have been some rumblings about those differences in grip levels as a result of the putting together of this world famous facility, but Ben knows them well from the many laps he ran here. If my memory serves me, in just the two days alone of tire testing in 2008 he ran close to 80 laps or so each day. In other words, over three race distances each day. So this should be a great weekend for him here in Indy!

One of two of the still-to-be-officially-announced worst-kept secrets left in the MotoGP silly season is where Ben will end up for the 2011 season. With '07 MotoGP World Champion Casey Stoner making his move to the Repsol Honda team official and multi-time 500CC/MotoGP World Champion Valentino Rossi making his move to the Marlboro Ducati team official, Ben Spies moving to the official Yamaha MotoGP team for next season should be 'officially' announced this weekend on U.S. soil at the World Capital of Racing. And of course the second of those two worst-kept secrets being the announcement-most likely this weekend as well-of Nicky Hayden staying on for another year with the Marlboro Ducati team, and his pairing again with soon-to-be-team mate Valentino Rossi.

This should be a great weekend overall, what with the 'official' announcements for two of the three American riders in the MotoGP class, the weather outlook overall is really expected to be superb and most likely the best of the three years that MotoGP has visited here at IMS. Sure has to beat '08 with the remnants of Hurricane Ike bearing down on us the final day of racing and pushing 60+ mph winds up most everyone's arse and all but spoiling the Yamaha and Boz Bros party in the infield in taking out some of the tent supports. Last year we even got some rain on Friday so it made it sketchy for not only the fans, but especially the riders during day one's on-track activities.

It's going to be great to see Ben and the boys back here for this monumental event. And since he was off killing 'em in World Superbike last year this will be his first visit since he brought the Rizla Suzuki #11 home in sixth place during the Hurricane Ike edition of the Red Bull Indianapolis MotoGP round in September of 2008. It should be great for him as well as the fans, and we wish Ben as well as all of the others the best as well as the safest of racing this weekend!

Colin Young over at SpeedTV.com's Moto Racing News penned this article about Ben's season and his hopes for himself and the Monster Energy Yamaha, as well as for the U.S. fans at this weekend's running of the 3rd Annual Red Bull Indianapolis MotoGP, round 11 of the 18 round MotoGP 2010 season.

Check it out, and we'll be watching for Ben, Nicky and Colin to put on a great show no matter where they end up, as well as the rest of the MotoGP traveling road show!