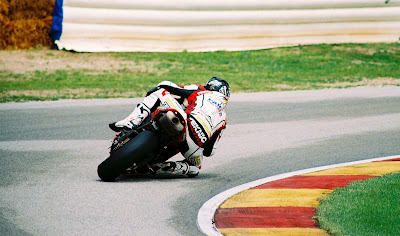 Graves Motorsports Yamaha YZF-R1-mounted Josh Hayes romped to victory today in the second of two races at Virginia International Raceway in the AMA Superbike Series and in doing so also added to his points lead in the championship. In route to beating former team mate Ben Bostrom on a Pat Clark Motorsports Yamaha R-1 by over 7 seconds, Hayes added ten points to the single-point lead he held in the championship after yesterday's race one action. Yesterday's winner and series points runner-up Tommy Hayden brought the Yoshimura Rockstar Makita Suzuki GSX-R1000 home in the third spot, over 15 seconds back from winner Hayes. It was Hayes' fifth win in the premier class this year, and he now takes a 364-353 lead in the AMA Superbike Championship with him to the next round at New Jersey Motorsports Park over the Labor Day Weekend.

Also of note for today, Aaron Yates sat out the race on his Jordan Suzuki again to alleviate any concerns of tweaking his leg injury on the tight and twisty VIR track. Meanwhile, Canadian sensation Brett McCormick, who was drafted by the Jordan team to help fill-in during Aaron's absence, brought it home in fourth today for his best finish of yet in the premier North American AMA Superbike Series.
Eric Bostrom, on the Cycle World/Attack Performance/Yoshimura Suzuki crashed out early, apparently uninjured. And John Hopkins, who yesterday put up one heck of a fight with the top trip until crashing out on the 19th lap on his M4/RoadRacingWorld/Monster Energy Suzuki,
also sat out today due to minor injuries suffered to his still-healing right wrist that he had surgery on some three months ago. Bravo to John for a great showing yesterday, in spite of the late race crash. Looking like the Hopper of old for sure!