We just returned to Indy from the originally-scheduled Lima Half-Mile after the event was postponed until tomorrow due to very heavy rains in the area that completely soaked the Allen County Fairgrounds facility.

Officials with AMA Pro Flat Track waited until the last possible moment to pull the plug on today's 30th running of the annual Ohio National Championship round of The Rolling Thunder Show, but unfortunately at 4:00 PM EDT there was no more holding back and the event was called a wash-out for today.

We did, however, get to spend some quality time with current points leader Brandon Robinson and his tuner with the TJ Burnett Farms/USC/Hart Racing Kawasaki team, James Hart, and also got to listen and swap some very interesting stories with Brent Armbruster, the new crew chief for the Lloyd Brothers Motorsports Ducati/Henry Wiles team.

All was not lost in terms of quality time spent with these great representatives of the greatest racing series on two wheels in the world, but unfortunately not a wheel was turned in anger on the track, only some very quality bench racing and stories shared in the pit area at Lima.  And we thank the aforementioned group of great folks for taking time to share some of their best and quality time with us here at Stu's Shots.  You guys were some great hosts and I really appreciate the time you were able to spend with me today.  That part WAS a blast!

As of now, AMA Pro Flat Track has high hopes of getting practice started tomorrow at 10:00 AM EDT and for the first heat race in the AMA Pro J&P Cycles Pro Singles Championship Series to roll off at 1:00 PM EDT.  And with any luck, we will be there, weather permitting!


Due to today's postponement of the AMA Pro Flat Track event, the event schedule has been updated and posted to amaproracing.com. For your convenience, a direct link to the schedule is below.

You can check out the full press release below courtesy of the great, yet damp crew from AMA Pro Flat Track. 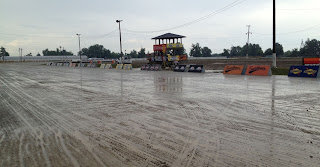 Heavy rains in the area that soaked the Allen County Fairgrounds this afternoon forced officials of AMA Pro Flat Track to postpone round 4 of the 2013 AMA Pro Flat Track presented by J&P Cycles Grand National Championship season at the Lima Half-Mile until tomorrow, June 30.  With a 40% chance of showers predicted for the area as of 10:30 PM EDT on Saturday, June 29 we are still hoping to get this event in on Sunday, and are praying for a 60% chance of no moisture for the day's events.  AMA Pro Flat Track photo by Dave Hoenig.
"It's an unfortunate set of circumstances for this to happen but the track isn't in any shape to race on today," said Dan Johnsen, Director of AMA Pro Flat Track.  "We're going to try to give it a go tomorrow and we're optimistic that the weather will help us out."
Gates open tomorrow at 9:30 a.m. with practice scheduled to start at 10:00 a.m. local time.
For more detailed event information please visit http://amaproracing.com/ft/events/event.cfm?year=2013&eid=2013021330.  For tickets, please visit http://ohionationalchampionship.net/ or call (419) 991-1491.
Fans who are unable to attend the Lima Half-Mile are encouraged to tune into AMA Pro Live.  The live streaming devices will put fans in the director's chair, allowing for complete viewing of the event.  From the first practice all the way up until the final checkered flag is dropped, tune in to AMA Pro Live to catch all of the action.
About AMA Pro Flat Track presented by J&P Cycles:

AMA Pro Flat Track presented by J&P Cycles is a national motorcycle racing series in North America and is considered one of the oldest forms of motorcycle racing.  Sanctioned by AMA Pro Racing, the Series is highly regarded as the most competitive form of dirt track racing in the world.  The 2013 schedule consists of rounds on the country's finest flat track courses. For more information on AMA Pro Flat Track presented by J&P Cycles, please visit http://www.amaproracing.com/ft/.
Posted by Stuman714 in Indy at 10:40 PM