DAYTONA BEACH, Fla. (June 19, 2013) - It will be hard for the AMA Pro Motorcycle-Superstore.com SuperSport class to top the intense racing it demonstrated last round at Elkhart Lake, but the class does have a history of exciting races at Barber Motorsports Park, the scene of this weekend's Triumph SuperBike Classic presented by America's First Federal Credit Union.
In Wisconsin, Corey Alexander (No. 5 National Guard/Celtic Racing Suzuki GSX-R600) won both races and made his stamp on the event with his first career double win in AMA Pro Racing.  The New Yorker has been on a course of steady improvement in his time in the class and now looks to be ready to step up and win on a routine basis.  Corey enters this weekend's races with a lot of momentum as the only repeat winner in the class thus far.  Alexander showed he can win by a large margin, as he did in Race 1, and also in a close fight, as shown by his triumph in the five-rider battle for the win on Race 2.  Alexander, who competes in the East division, closed on Stefano Mesa (No. 37 Motosport.com/EBR Yamaha YZF-R6) in the points in Wisconsin and has another chance to do that in this weekend's East doubleheader.  Corey currently trails Stefano by six points after four of ten races in the Motorcycle-Superstore.com SuperSport season. 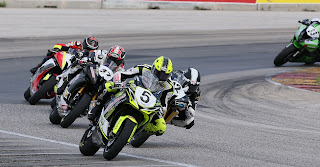 Corey Alexander on the #5 National Guard/Celtic Racing Suzuki GSX-R600 leads the pack during one of the AMA Pro Motorcycle-Superstore.com SuperSport Series races at Road America over the May 31-June 2 weekend, and went on to win both races over the weekend.  AMA Pro Road Racing photo by Brian J. Nelson.
Mesa might have lost a little ground to Alexander in Wisconsin, but the Colombian mitigated the damage with pole and two second place results in what turned out to be quite a positive weekend.  Despite a team change after Daytona, Mesa didn't miss a beat at Road America and seems focused in his bid to win the title.  Mesa just missed out on a win at Wisconsin, finishing just 0.012 back of Alexander on Sunday.  He maintained his aggressive approach throughout the weekend.
The top points man in the West, Tomas Puerta (No. 12 RoadRace Factory Yamaha YZF-R6) got off to a slow(er) start in Wisconsin but led much of Sunday's race after finding his mojo.  Puerta looked strong for the late-race shuffling, but ultimately lost out on the victory despite leading the most laps.  His 0.013 margin from the win will go down as one of the closest third places ever, but the Colombian will look to back up his Daytona win in Alabama.  He doesn't have to worry about the points this time as he is a West competitor.  His 32-point lead over David Sadowski, Jr. (No. 101 Mach Modified Yamaha YZF-R6) is safe until the Laguna Seca round.
With many of the previous class winners graduating to GoPro Daytona SportBike over the past few seasons, the aforementioned trio of Mesa, Puerta, and Alexander looks to have risen to the top of the field on a consistent basis.  But there are a group of riders who have challenged them at times and made life very tough.  Sadowski, Jr. has earned three top six results including a second at Daytona.  A tough blow to his title hopes on Sunday at Elkhart Lake (33rd place) means he'll have to claw back to Puerta, but the son of former National Guard SuperBike competitor David Sadowski has impressed in 2013.  Two veteran riders have also made their mark. Jeffrey Tigert (No. 91 CM Motorsports Yamaha YZF-R6) and Sebastiao Ferreira (No. 73 B.P. Racing Yamaha YZF-R6) are just behind Sadowski in West points and have earned a steady haul of top ten finishes this year.  Tigert ran up front in Wisconsin and has shown he can race at the front.  Ferreira has shown the skills as one of the top club racers on the West coast club scene can translate well into Motorcycle-Superstore.com SuperSport.
For Travis Wyman (No. 24 Harv's H-D Suzuki GSX-R600) the 2013 season started out tough with problems in the opener but the talented New Yorker has been consistently fast since then.  Three top tens mean he's now third in East points heading into Alabama.  Wyman battled back and caught the leaders on Sunday in Wisconsin to earn his best result yet - fourth - in that race.  That meant Wyman was able to leapfrog multi-time race winner Hayden Gillim in points.  Gillim didn't fare that well at Road America, a track that's always caused him fits, but the Kentuckian is poised for one of his hot streaks.  Last year's second place man in overall points had 12 top five finishes in 2012 and will eventually return to form.  The fifth place points men in each series are also carrying momentum into this weekend's races.  Conner Blevins (No. 33 Ajax Kawasaki ZX-6R) earned his best Motorcycle-Superstore.com SuperSport result yet at Road American, earning sixth on Sunday.  Like Blevins, Travis Ohge (No. 4 Houston Superbikes Suzuki GSX-R600) earned his best result of the year in the last race, taking seventh place.
The Motorcycle-Superstore.com SuperSport fields have been large this season, and this race has 44 riders pre-entered for the doubleheader.  With races Saturday and Sunday, the big field should put on their usual exciting show.
This weekend's GEICO Motorcycle AMA Pro Road Racing action will be broadcast on CBS Sports Network as part of the CBS Sports Spectacular.  This weekend's coverage includes LIVE broadcasts of both AMA Pro National Guard SuperBike races, and will begin Saturday, June 22 at 2:30 p.m. ET/11:30 a.m. PT with the weekend Preview Show.  Live coverage of AMA Pro National Guard SuperBike Race 1 will air on Saturday, June 22 at 4:00 p.m. ET/1:00 p.m. PT with Race 2 slotted in for Sunday, June 23 at 4:00 p.m. ET/1:00 p.m. PT.  Fans can find CBS Sports Network on their TV by using the channel finder at http://www.cbssportsnetwork.com/channel-finder.
In addition to the live broadcasts on CBS Sports Network, AMA Pro Live will be live streaming multiple channels of behind-the-scenes video of the weekend's activities alongside Live Timing & Scoring.  AMA Pro Live puts fans in the director's chair, allowing them to choose from a variety of viewpoints including track cameras, paddock cameras and a press conference channel.  Streaming will begin with coverage of the weekend's practice and qualifying sessions on Friday, June 21 at 1:00 p.m. ET/10:00 a.m. PT at http://www.amaprolive.com.
All weekend long, stay connected with GEICO Motorcycle AMA Pro Road Racing on social media at http://twitter.com/AMAProSBK and http://www.facebook.com/AMAProRoadRacing.
About GEICO Motorcycle AMA Pro Road Racing:
GEICO Motorcycle AMA Pro Road Racing is the premier motorcycle road racing series in North America and is universally regarded as one of the most competitive road racing organizations in the world. The 2012 schedule consists of 12 rounds of competition on the country's finest road courses. The Series is comprised of four production-based classes: AMA Pro National Guard SuperBike, AMA Pro GoPro Daytona SportBike, AMA Pro Motorcycle-Superstore.com SuperSport and the AMA Pro Vance & Hines Harley-Davidson Series. Learn more about GEICO Motorcycle AMA Pro Road Racing at www.amaproracing.com/rr/.
Posted by Stuman714 in Indy at 6:15 PM