One of the two remaining TT events on the 2013 AMA Pro Flat Track presented by J&P Cycles Grand National Championship season calendar, the Castle Rock TT has been one of the longest-tenured events that the series has visited over the years and decades.

Along with the current-longest event on the series' calendar, the Peoria TT, the Washington State-hosted event has been the home to many a TT specialist over the years since it first hosted a National event in 1965.

Riders such as Sonny Burres, Chuck Joyner and Mickey Fay, among others, cut their teeth in AMA Pro Flat Track competition while taking on the National series' regular stars.  And the Castle Rock TT is just as famous to the Northwest area residents as the Peoria TT is to those of us from the Midwest.

Falling off of the calendar after the eruption of the Mount St. Helens volcano in 1980, the event has seen a resurgence of late with it's re-addition to the calendar and the emergence of a new class of TT and Northwest-area flat track specialists such as Sammy Halbert, his brother Jethro and Brad 'The Bullet' Baker.

With the track hosting what will be round 8 of the 2013 AMA Pro Flat Track presented by J&P Cycles Grand National Championship season on August 3, it was announced today by the track's promoters, the Mt. St. Helens Motorcycle Club and AMA Pro Flat Track that there will be a test & tune session at the track on July 21, the day after the Grays Harbor Half-Mile National in Elma, Washington.  This will be a great opportunity for the riders and teams already in the area to get their set-ups dialed in for what should be another stellar event at the long-standing facility.

In the shot above from round 9 of the 2012 AMA Pro Flat Track Grand National Championship season at the Peoria TT, the riders get ready to let 'er rip in the Dash for Cash event at the Peoria Motorcycle Club-hosted venue.

JD Beach on the #95 TJ Burnett Farms Kawasaki KX450F gives the thumbs up to Briar Bauman on the #10Z Rod Lake Racing Honda CRF450R, while Sammy Halbert on the #7 Fredericktown Yamaha YZ450F checks his front tire before lining up to do battle in the four-lap bonus round.

Jake Johnson on the #1 Zanotti Racing Honda checks out the competition, while Jared Mees on the #9 Montgomeryville Cycle Honda checks his spot on the start line and Henry Wiles on the #17 Don's Kawasaki checks his lid and goggles.

You can check out the full press release below thanks to AMA Pro Flat Track, and if you are in the area of Castle Rock on July 21, make sure you get by the track to check out the test session that will be open to all to attend.  And make sure you get your tickets for the National event to be held at the track on August 3, 2013 for what should be another superb round of racing at the Castle Rock TT!


DAYTONA BEACH, Fla. (June 14, 2013) - Last weekend proved to be a highly successful test and tune for the riders of AMA Pro Flat Track presented by J&P Cycles at the Lima Half-Mile as they used the opportunity to get ready for the event set to be held on June 29, 2013 on its uniquely designed pea gravel dirt track.
On July 21, 2013, promoters of the Castle Rock TT will be offering licensed AMA Pro Flat Track presented by J&P Cycles riders the same opportunity as Lima which is to test and tune their motorcycles at the Castle Rock Race Park from 12:00 p.m. to 8:00 p.m. in advance of this year's event scheduled for August 3, 2013. 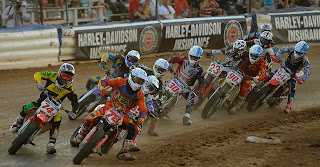 Gerit Callies on the #76L Fun Mart Cycles KTM and Rodney Spencer, Jr. on the #74Z 831 Pinnit Honda lead the start of heat race #2 in the AMA Pro Flat Track Pro Singles Championship round at the Castle Rock TT on August 4, 2012.  Castle Rock will be hosting a test & tune session for the riders and teams in AMA Pro Flat Track competition on July 21, 2013.  AMA Pro Flat Track photo by Dave Hoenig.
The test and tune will be open to the press as well as the public; allowing for everyone interested to get up close and personal with the stars of the sport as they get a feel for the .6-mile course and prepare for the second half of the season.
The test and tune at Castle Rock comes one day after AMA Pro Flat Track presented by J&P Cycles riders square off at Grays Harbor Raceway just down the road in Elma, Wash.  For tickets and more information regarding the event, please visit http://www.showclix.com/event/mshmc.
About AMA Pro Flat Track presented by J&P Cycles:


AMA Pro Flat Track presented by J&P Cycles is a national motorcycle racing series in North America and is considered one of the oldest forms of motorcycle racing.  Sanctioned by AMA Pro Racing, the Series is highly regarded as the most competitive form of dirt track racing in the world.  The 2013 schedule consists of rounds on the country's finest flat track courses.  For more information on AMA Pro Flat Track presented by J&P Cycles, please visit http://www.amaproracing.com/ft/.
Posted by Stuman714 in Indy at 5:00 PM