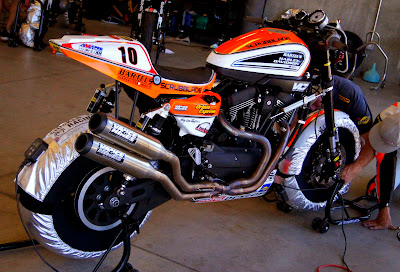 Geico Motorcycle AMA Pro Road Racing announced today that the $60K Showdown will return to the 2013 AMA Pro Vance & Hines Harley-Davidson Series after a successful launch to the season-ending payout and shootout from the 2012 season.

Adding to the allure of the spec class, the extra funds will come in handy for the teams and racers in what is considered one of the tightest racing series, in terms of close and competitive racing on the North American continent.

Last year's shoot out saw Michael Barnes take the championship in what was then known as the AMA Pro Vance & Hines XR1200 Series in a close battle down to the wire at the season-ending round at the New Orleans Motorsports Park in early October.

In the shot above, Josh Chisum's #10 JCR/Scrubblade/Bartel's H-D-sponsored XR1200 sits in the garage awaiting the afternoon practice session at the Indianapolis Motor Speedway on Saturday, August 11, 2012 during the series tire test at the infamous Brickyard track located in the heart of Speedway, Indiana.


ELKHART LAKE, Wis. (June 5, 2013) - With a season opener at Daytona that saw the top nine riders cross the line within one second of each other, the AMA Pro Vance & Hines Harley-Davidson Series has never been more exciting.  Adding a strategic element to that mix along with a $60,000 boost to the prize money up for grabs, the XR Showdown returns for the 2013 GEICO Motorcycle AMA Pro Road Racing season.
First introduced in 2012, the XR Showdown is a special year-end points fund award to be battled for by the top ten competitors in the final four races of the season, beginning with the Vance & Hines Harley-Davidson Series doubleheader at the Red Bull Indianapolis GP.
Riders compete for the XR Showdown by being in the top ten in the point standings at the conclusion of the fifth race at Miller Motorsports Park.  After the Miller round, each of the riders in the top ten will have their championship points reset to 1,000 points, putting the them back on a level playing field.  The rider with the most points at the end of the season takes home the championship and $25,000 in Showdown prize money, with the remaining $35,000 paid out to second through tenth in the final points standings. 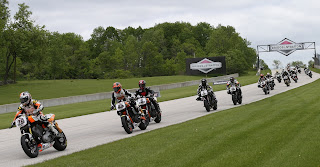 
GEICO Motorcycle AMA Pro Road Racing is the premier motorcycle road racing series in North America. Sanctioned by AMA Pro Racing, the Series is universally regarded as one of the most competitive road racing organizations in the world. The 2013 schedule includes rounds on many of the country's finest road courses. For more information on GEICO Motorcycle AMA Pro Road Racing, please visit http://www.amaproracing.com/rr/.
Posted by Stuman714 in Indy at 7:30 PM