LIMA, Ohio (June 30, 2013) - Round 4 of AMA Pro Flat Track presented by J&P Cycles at the Allen County Fairgrounds has been cancelled.  For the second time this weekend, weather has been at the forefront of problems and has resulted in the cancellation of the Lima Half-Mile.  Following another heavy overnight storm, the gravel track at the Allen County Fairgrounds was left in such condition that it was deemed unsafe to race on. 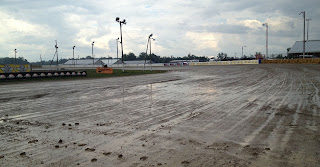