After a seven week break since the last round of the 2013 AMA Pro Flat Track presented by J&P Cycles Grand National Championship season at the Stockton Half-Mile on May 11, the riders and teams that make up The Rolling Thunder Show are ready to roll into the Allen County Fairgrounds in Lima, OH. for the 30th running of the Ohio National Championship round of the season.

After the series suffered from another postponement due to rains in the area at the Memorial Day running of the Springfield Mile I round, fans and friends alike are ready for racing to resume on the pea gravel and limestone surface for what should be another stellar event in the greatest racing show on two wheels in the world.

With the entry list boasting the regular names of Jake Johnson, Bryan Smith, Henry Wiles, Sammy Halbert, and 2013 points leader Brandon Robinson, to name a few, the racing is sure to be hot and heavy throughout the afternoon and night as the racing season gets into full swing for the busy summer schedule ahead.  And hopefully the weather will cooperate as the Midwest has been seeing it's share of storms over the early part of the late spring-early summer this year.

One absence from the regular list of riders, however, is defending AMA Grand National Champion Jared Mees, who was involved in a practice crash at the Ashland, OH. round of the Steve Nace Racing All-Star Series last Friday.  Mees suffered a broken ulna in his forearm that is expected to keep him out of the saddle until at least through the Hagerstown Half-Mile round scheduled for July 7, in which time he hopes to return to racing.  However, The Champ is expected to be in attendance to check out the racing and help support his fiancé and future wife, Nichole Cheza, throughout the day's events.

If you are anywhere near the Lima, OH. area tomorrow, you owe it to yourself and your family and friends to head to the Allen County Fairgrounds to check out what will be some of the best racing of the season, as it has been for going on 30 years.  This is a must-see race for all of your motor heads and motorcycle racing heads!

In the shot above from round 5 of the 2012 AMA Pro Flat Track Grand National Championship season at the Lima Half-Mile, heat race #2 roars off the line with pea gravel, dirt and limestone showering those left in the shadows.

So get your gear packed and head out early tomorrow for what will be a great day of slinging dirt at the Lima Half-Mile.  First practice rolls off at 3 PM EDT and the first heat race in the AMA Pro J&P Cycles Pro Singles Championship rolls off at 7:30 PM EDT.  Click here for the link to tomorrow's schedule.

And a big thanks to AMA Pro Flat Track for their press release preview, which you can read below.  Let's go racing folks!


LIMA, Ohio (June 28, 2013) - Round 4 of AMA Pro Flat Track presented by J&P Cycles is finally here. In less than 24 hours, the stars of the sport will roll out their two-cylinder motorcycles and prepare to grind it out on the uniquely designed pea gravel dirt track that makes up the Allen County Fairgrounds.
Last season, Grand National Champion runner-up Sammy Halbert (South East Harley/Harley-Davidson) claimed one of his four 2012 victories here in thrilling fashion as he and Henry Wiles (Lloyd Brothers Motorsports/Harley-Davidson) battled it out all the way to the very end.  Halbert outdueled Wiles on the final lap as he crossed the finish line just .22 seconds before the Michigan product and clinched the Grand National Champion Expert Twins main event. 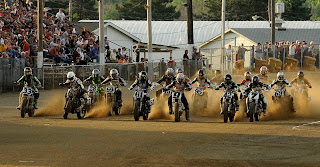 Jared Mees on the #9 Rogers Racing XR750, Bryan Smith on his #42 Moroney's Fasthog.com XR and Sammy Halbert on his #7 Kings Kustoms XR lead the pack off the line during heat race #1 at the Lima Half-Mile in June 2011.  Mees, the defending AMA Grand National Champion, will miss this year's event at Lima due to breaking his arm in a practice crash last weekend at the Steve Nace Racing All-Star event in Ashland, OH., but is expected to attend as a spectator.  AMA Pro Flat Track photo by Dave Hoenig.
After suffering a torn ACL during the offseason, Halbert was forced to miss the first two rounds at Daytona to start the year.  However, in Halbert's first event removed from injury, the Graham, Wash. product took full advantage of being healthy as he claimed victory at the San Joaquin County Fairgrounds in Stockton, Calif. on the series' first trip out west.  The win catapulted Halbert into the top ten in points and the 25-year-old seems to be back to his typical imposing form heading into Lima.
A name that people can't stop talking about so far in 2013 is that of Brandon Robinson (TJ Burnett, USC Kawasaki/Kawasaki EX650), and for good reason.  The Oxford, Penn. product is the current Grand National Championship points leader after three strong performances in the season's opening rounds.  This weekend will tell a lot about Robinson, who already has one victory to his credit thus far in 2013.  The 22-year-old struggled tremendously here a year ago with a 16th place finish in the main event.  However, Robinson's new look in 2013 combined with his extra year of experience in the sport indicate that he's here to stay and expects to be a legitimate contender for the remainder of this season as well as many seasons to come.
Brad Baker has tasted the bitter-sweet flavor of second-place on three consecutive occasions this season.  Let it be clear that there have only been a total three events this season.  The positive side to this is that Baker remains second in the points and only seven points off the lead behind Robinson.  The down side to Baker not being able to finish and seal his first victory is simply that; he can't finish.  In almost every race, Baker has had his share of the lead and almost every time has seen it disappear in the most crucial moments.  Although Baker also struggled at Lima last year, the Dodge Bros Racing Harley-Davidson rider remains as confident as ever and knows that his time is just around the corner.
2013 AMA Pro Grand National Championship Point Standings
1)     Brandon Robinson
2)     Brad Baker
3)     Henry Wiles
4)     Jake Johnson
5)     Mikey Rush
6)     Kenny Coolbeth, Jr.
7)     Jared Mees
8)     Robert Pearson
9)     Sammy Halbert
10)   Bryan Smith
AMA Pro J&P Cycles Pro Singles
Similar to how Brandon Robinson is an unfamiliar face atop the Grand National Championship Expert point standings, Kyle Johnson (DAO Apparel/Kawasaki KX450F) has been an even bigger surprise in 2013.  Johnson, a rookie, took the series by storm immediately by claiming victory at Daytona during Round 1 of action to kick off the season.  The 19-year-old sensation raised eyebrows again in Stockton after landing on the podium with a solid third-place finish and currently sits atop the AMA Pro J&P Cycles Pro Singles point standings heading into Lima.  No one knows a whole lot about this kid. But they do know one thing - he can ride.
Stephen Vanderkuur (Parkinson Brothers Racing/Honda CRF450R) is a household name who won the 2012 AMA Pro J&P Cycles Pro Singles Championship last season and came into this season as a heavy favorite to repeat.  However, after starting off the year with two finishes outside the top ten, Vanderkuur's potential to replicate is looking very slim.  The bright side for the Davison, Mich. product is this - Vanderkuur got hot right around this exact time last year; claiming his first 2012 win here at Lima and carrying that momentum for the remainder of the season, winning two more races and obtaining several podiums on his way to the championship.  Look for Vanderkuur to be hungry for a strong finish here this weekend in hopes of bettering his 12th place position in the points.
2013 AMA Pro J&P Cycles Pro Singles Point Standings
1)     Kyle Johnson
2)     Wyatt Maguire
3)     Ryan Wells
4)     Rodney Spencer Jr.
5)     Jake Constantine
6)     Mike Poe
7)     Hunter Taylor
8)     Jason Isennock
9)     Dominic Colindres
10)   Shayna Texter
Event Schedule Information
The event is scheduled for Saturday, June 28, 2013 at the Allen County Fairgrounds with gates opening to the fans at 3:00 p.m. ET and opening ceremonies scheduled to take place at 7:00 p.m. ET.  For more detailed event information please visit http://amaproracing.com/ft/events/event.cfm?year=2013&eid=2013021330.  For tickets, please visit http://ohionationalchampionship.net/ or call (419) 991-1491.
Fans who are unable to attend the Lima Half-Mile are encouraged to tune into AMA Pro Live.The live streaming devices will put fans in the directors chair, allowing for complete viewing of the event.  From the first practice all the way up until the final checkered flag is dropped, tune in to AMA Pro Live to catch all of the action.
About AMA Pro Flat Track presented by J&P Cycles:

AMA Pro Flat Track presented by J&P Cycles is a national motorcycle racing series in North America and is considered one of the oldest forms of motorcycle racing. Sanctioned by AMA Pro Racing, the Series is highly regarded as the most competitive form of dirt track racing in the world. The 2013 schedule consists of rounds on the country's finest flat track courses. For more information on AMA Pro Flat Track presented by J&P Cycles, please visit http://www.amaproracing.com/ft/.
Posted by Stuman714 in Indy at 8:02 PM