BIRMINGHAM, Ala. (June 23, 2013) - Monster Energy Graves Yamaha's Josh Hayes once again had his hands full at Barber Motorsports Park on Sunday, and once again, he came through like a champion.  The reigning AMA Pro National Guard SuperBike king was pushed to the brink by National Guard Jordan Suzuki's Roger Hayden in a virtual repeat of Saturday's tense final-lap showdown to conclude the Triumph SuperBike Classic presented by America's First Federal Credit Union in epic fashion.

The race took shape in the early stages as a four-rider shootout with Hayes' teammate, Josh Herrin, powering into the lead at the start.  Herrin hounded Hayes from second over the race's opening five laps after Hayes made an opening-lap pass while Hayden and Yoshimura Suzuki Factory Racing's Martin Cardenas stalked just behind the Yamaha duo.  Herrin sliced up the inside of Hayes entering 'Charlotte's Web' on lap 6 and led the next two laps, bunching the pack back up after it threatened to break apart.  Hayes retook the lead on lap 8 and Herrin made a crucial mistake a pair of laps later.  That allowed Hayden to snatch second and close in on Hayes' rear wheel, where he would remain for the remainder of the race.  The Kentuckian was within striking distance on the contest's final lap, but that last circulation played out just as it had the day before, with the experienced triple champion never making a mistake or allowing his hungry rival an opportunity to find a way through into the lead.  Hayes launched off the final corner and beat Hayden to the stripe by a scant 0.221-second margin following 21-nailbiting laps. 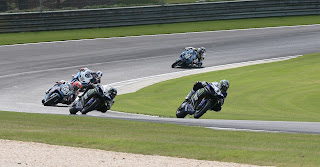 AMA Pro Vance & Hines Harley-Davidson Series
Airline pilot Steve Rapp flew to his second consecutive AMA Pro Vance & Hines Harley-Davidson Series victory with another brilliant, abbreviated weekend performance.  Just as he did at Road America, Rapp missed some early-weekend track time but the veteran runner showed no ill-effects as a result.  The Suburban Harley-Davidson star again qualified on the front row and then raced his way into the lead early in the race, ultimately breaking free en route to the checkered flag.  Rapp faced a determined challenge from Spyke's Harley-Davidson's Michael Barnes during the race's opening half.  He finally broke the pursuit of the defending class champ on lap 7 and ultimately worked up a 5.454-second margin of victory.  Rapp said, "The guys from Suburban Harley-Davidson -- from the first time I rode the bike, there's just something about it.  The way we have it set up and the special things they've done for me as a rider, like handlebars and the seat and stuff like that, it just feels so good I feel like I can ride it a lot harder.  I started the season with really nothing going on and Joe from Suburban Harley called me and said if I wanted to come out for Daytona we'd at least get one race in.  I said 'that'd be great' and it's just kept getting better. If we can get the whole season in, that'd be great. It's been an unexpected welcome, for sure."
Barnes came home with a clear runner-up finish, another five seconds separating him from the battle that raged for the final spot on the podium.  That position went to Eco-Fuel Saver/Scrubblade's Tyler O'Hara, who aced Rapp's Suburban Harley-Davidson teammate, Ben Carlson, on the final lap of the 11-lap race.  Harv's Harley-Davidson's Travis Wyman came home a lonely fifth after running with the lead pack in the race's early stages.  Positions 6-14 finished the race in a relatively tight pack, headed by Mob Racing's Shane Narbonne.  Longevity Racing's Barrett Long, H&S Distributors Nicholas Hansen, ChiliPepperRacing.com's Ricky Parker, and Racing For A Wish's Adam Raffe rounded out the contest's top ten.
Next Up
The 2013 GEICO Motorcycle AMA Pro Road Racing season will resume on July 12-14 at Mid-Ohio Sports Car Course in Lexington, Ohio for the Buckeye Superbike Weekend presented by Dunlop Tire.
This season's GEICO Motorcycle AMA Pro Road Racing action is being broadcast on CBS Sports Network as part of the CBS Sports Spectacular.  Fans can find CBS Sports Network on their TV by using the channel finder at http://www.cbssportsnetwork.com/channel-finder.
Stay connected with GEICO Motorcycle AMA Pro Road Racing on social media at http://twitter.com/AMAProSBK and http://www.facebook.com/AMAProRoadRacing.
About GEICO Motorcycle AMA Pro Road Racing:
GEICO Motorcycle AMA Pro Road Racing is the premier motorcycle road racing series in North America and is universally regarded as one of the most competitive road racing organizations in the world.  The 2013 schedule consists of nine rounds of competition on the country's finest road courses.  The Series is comprised of four production-based classes: AMA Pro National Guard SuperBike, AMA Pro GoPro Daytona SportBike, AMA Pro Motorcycle-Superstore.com SuperSport and the AMA Pro Vance & Hines Harley-Davidson Series.  Learn more about GEICO Motorcycle AMA Pro Road Racing at www.amaproracing.com/rr/.
Posted by Stuman714 in Indy at 7:17 PM