DAYTONA BEACH, Fla. (June 17, 2013) - The fast-evolving 2013 AMA Pro National Guard SuperBike title fight picks back up this weekend as GEICO Motorcycle AMA Pro Road Racing travels to Barber Motorsports Park in Birmingham, Ala. for the Triumph SuperBike Classic presented by America's First Federal Credit Union.
Leading the way into Round 3 with 105 points on the strength of a victory and three runner-up finishes is Martin Cardenas (No. 36 Yoshimura Suzuki Factory Racing Suzuki GSX-R1000). The reigning AMA Pro GoPro Daytona SportBike king backed up his spectacular Daytona opener with what may have been an even more impressive showing at Road America; the Colombian demonstrated his ability to not just reap the rewards when defending triple champ Josh Hayes (No. 1 Monster Energy Graves Yamaha YZF-R1) has struggles, but challenge him outright.  Cardenas returns to the scene of his breakthrough first-career National Guard SuperBike victory this weekend, as he won in inclement conditions at Barber Motorsports Park as a class rookie in 2011.  Martin has also starred at the circuit on the undercard, doubling BMP in both 2009 and 2010 in the GoPro Daytona SportBike class.
Meanwhile, Josh Herrin (No. 2 Monster Energy Graves Yamaha YZF-R1), the points leader coming out of the opener, should enter this weekend's showdown full of confidence despite somewhat of a mixed outing in Wisconsin.  Herrin enjoyed perhaps his best weekend as a rookie in Birmingham a year ago, pushing Hayes for the win deep in Saturday's Race 1 before accepting a runner-up finish.  With an additional year's worth of National Guard SuperBike experience working in his favor, Herrin should pose an even bigger threat this weekend. 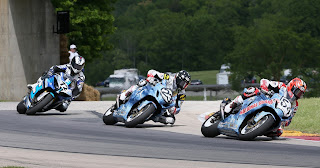