ELKHART LAKE, Wis. (June 2, 2012) - There were no 'what ifs' following the second half of the Subway SuperBike Doubleheader that closed out the GEICO Motorcycle AMA Pro Road Racing weekend at Road America.  In contrast to Saturday's opening-lap clash for the lead, the championship's three major players -- reigning National Guard SuperBike champ, Josh Hayes, pre-event title leader Josh Herrin, and the current points leader, Martin Cardenas -- all got away relatively cleanly for the 12-lap contest and settled in for a straight fight to determine the day's victor.  And in the end, Hayes once again proved his supremacy. However, unlike the script that played out so frequently during the 2012 season -- including twice here at Road America -- the win did not come easily.
The Monster Energy/Graves/Yamaha superstar worked past Herrin on the opening lap and then hounded Cardenas until he finally found a way into the lead on lap 3. But, once in front, it proved no easy task to shake his determined challengers, and when he finally did -- unlike his numerous '12 blowouts -- the race was still not completely decided.  Hayes pushed the gap up to 2.428 seconds by lap 7, however, Cardenas responded by finding his groove aboard the #36 Yoshimura Suzuki Factory Racing GSX-R1000. The Mississippian's advantage decreased lap by lap from there on out until he finally took the checkered flag with the charging Colombian just 0.818 seconds behind and within a sniff of his #1 R1's draft.
The victory marks Hayes' fifth National Guard Superbike win in a row at Road America -- the most of any rider.  It also marked his second consecutive season of not only maximizing his points haul in Wisconsin but doing so while topping every single practice, qualifying session, and race.
Hayes now boasts 35 career SuperBike victories and lowered his title deficit by 14 points on the weekend. He currently has 71 points, 34 removed from Cardenas' class-leading 105.  With his Daytona disaster now firmly behind him, Hayes said, "It was a great weekend. I'm really happy with the results. The racing was very hard for me. It was a really tough day."
Commenting on Cardenas' late-race rally, Hayes remarked, "I was trying really, really hard. I got really tight. I was definitely struggling even from the halfway flag on. It was just me hanging on and gripping the bars really tight. My right arm is pretty worked... I started to panic a little bit when he started closing that gap up, but I was just trying to stay relaxed. I never really looked back. I had a pretty bad moment in 8 and thought, 'oh, you just threw away the race.' I looked back and saw I had a little bit of room and just tried to ride the second half of the lap clean. I'm glad I was able to make it to the line." 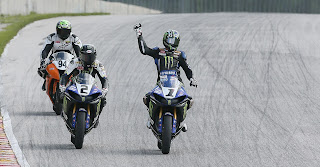