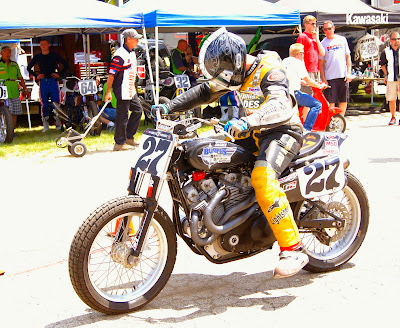 Morton, Illinois resident Rob Pearson and the Weirbach Racing team made the best of the racing conditions over the weekend by winning the Montgomery County Half-Mile in Dayton, OH. on June 8, 2013.  Pearson took the team's #27 Suzuki SV650 to the win in the Pro/Expert Twins class over AMA Pro Flat Track Grand National Championship regulars Dan Ingram #31 on the Brush/Eaken Racing XR750 and Kayl Kolkman on his #98 H-D XR750.

Pearson made the double work for him and the Iowa-based Weirbach team by coming in 2nd-place in the Expert Singles main while riding the team's Honda CRF450R, behind winner Kolkman.

After wrapping things up on Saturday night, the team headed up the road to the Allen County Fairgrounds, where Lima Half-Mile promoter Dean Gallup was hosting a test & tune for the regulars on the 2013 AMA Pro Flat Track presented by J&P Cycles Grand National Championship tour.  According to reports, close to 30 riders and teams attended the test session on Sunday, June 9 and took advantage of the afternoon session in preparation for round 4 of the 2013 season coming up at the Lima Half-Mile Grand National on Saturday, June 29.

You can read the team's press report below thanks to Weirbach Racing.

In the shot above, Pearson is seen rolling out for one of the practice sessions on the #27 Memphis Shades/Yamaha/Wiseco/K&N-sponsored H-D XR750 at the Springfield Mile I in round 4 of 2012 AMA Pro Flat Track Grand National Championship season on May 27.

This past weekend we took a trip over to Ohio to go do some cushion track racing and testing.  Our first stop was in Dayton, OH. for a Saturday night race at the Montgomery Co. 1/2 mile track.

We got to race both the 450 Honda and the Suzuki twin cylinder machine.  I won both heats on each bike and had great starting spots for the main.  The 450 was the first main event and Kayl Kolkman got out front and I never could quite get the grip I needed to make a move for the lead.  We ended up a respectable 2nd and we were onto the big motor class.

The Suzuki twin got off the line well and I grabbed the lead in the first corner.  I stuck the Suzuki in the cushion up high on the race track and lead the race wire to wire, with Dan Ingram coming in 2nd and Kolkman coming in 3rd.

After a good night of racing we drove up to Lima Sunday for some testing.  Lima, OH. is the next National on the schedule, so we jumped on the opportunity to get some laps around the fast, wide cushion half mile.

We got some laps around the place and made good changes to prepare for the upcoming race. Thanks to Weirbach Racing and all the sponsors for putting great equipment under me.

Hope to see you at the races soon!