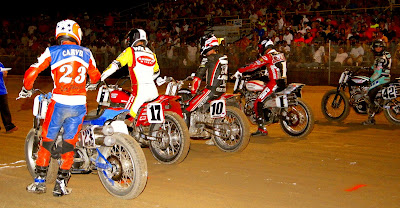 With just shy of 16 days to go, the riders and teams of the AMA Pro Flat Track presented by J&P Cycles Grand National Championship are poised to head to the Allen County Fairgrounds for round 4 of the 2013 season.

After the Springfield Mile I round was postponed from May 26 to August 31 due to persistent rain in the area, the break from round 3 at the Stockton Half-Mile on May 11 will have been 49 days for The Rolling Thunder Show, and the men and women of the greatest racing series on two wheels in the world will be ready to hit the track at the Lima Half-Mile.

After last year's exciting race in Lima, which saw a red flag thrown in the National main with just five laps to go, Sammy Halbert on his #7 Kings Kustoms H-D XR750 edged out Henry Wiles on the #17 Lloyd Brothers Motorsports Ducati by just feet at the checkers.

This year's race should again prove to be another nail-biter with 2-Time defending Lima winner Sammy Halbert ready to defend his title, and Henry Wiles ready to get the best of him this year with the LBM H-D XR750 hoping to level the playing field.  Brandon Robinson and the TJ Burnett Farms Kawasaki team are atop the overall points standings heading to Lima, and along with the rest of the field entered for the Ohio National Championship hope to make it hard on both The Slammer and The Hammer in being able to take the win.

In the shot above from last year's race, riders line up on the front row for the 25-lap National main at Lima.  Jeffrey Carver, Jr. on the #23 Kiesow Racing XR, Henry Wiles on the #17 Lloyd Brothers Motorsports Italian 'L' twin, Johnny Lewis on the #10 Scott Powersports Kawasaki, Jake Johnson on the #1 Zanotti Racing XR and Bryan Smith on his #42 Moroney's H-D XR await eventual winner Sammy Halbert to roll onto the front row alongside of them as they prepare for what was one of another stellar night of racing in Ohio on June 30 in round 5 of the 2012 AMA Pro Flat Track Grand National Championship season.

Check out the full press release below from AMA Pro Flat Track and get your tickets now as this is THE place to be on the last Saturday in June and one of the many races on the series' schedule you DO NOT want to miss!


DAYTONA BEACH, Fla. (June 13, 2013) - After a six week hiatus, AMA Pro Flat Track presented by J&P Cycles competitors are eager to get to Lima, Ohio for Round 4 action scheduled for June 29, 2013 located at the Allen County Fairgrounds.  It is sure to be a thrilling summer of racing this year as the Lima Half-Mile marks the first of ten events scheduled over the next two and a half months.
Dating back to 1984, Lima has long been a favorite venue for both riders and fans and has seen a number of different competitors claim victory.  To date, the rider with the most Lima Half-Mile wins is Scott Parker, who earned top honors seven times.
There is nothing in motorsports that matches the spectacle of AMA Pro Flat Track presented by J&P Cycles competition.  The racing is fast and furious from start to finish. Fans are on the edge of their seats as they watch riders fly around the track, pitching their bikes sideways and sliding through the turns.  There is no such thing as pacing in this type of racing as it's all or nothing; with only one spot at the top of the podium. 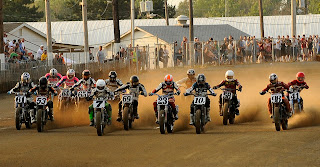 Sammy Halbert #7, Jeffrey Carver, Jr. #23, Briar Bauman #10Z and Kayl Kolkman #98 get the jump on the field during heat #1 race action at the Lima Half-Mile round of the 2012 AMA Pro Flat Track Grand National Championship on June 30.  AMA Pro Flat Track photo by Dave Hoenig.
Not only does AMA Pro Flat Track presented by J&P Cycles pit rider against rider, but it also pits machine against machine.  Harley- Davidson, Honda, Aprilia, BMW, Buell, Ducati, Kawasaki, KTM Suzuki, Triumph and Yamaha all offer AMA Pro approved models.  Since the first Lima Half-Mile back in 1984, this race has been dominated by Harley-Davidson.  The only other machine to land on the podium has been a Honda and that only happened twice - once in 1986 with Ronnie Jones and again in 1993 with Ricky Graham.  However, this year could be different.
Both the Honda RS750 and the Harley-Davidson XR750 run specially built race engines.  The last time a production engine won a half-mile was in 1982 when Scott Pearson took the checkered at Louisville, Kent. aboard a factory Honda NS750.  In 2008, Henry Wiles, piloting an Aprilia, came extremely close at Lima. In fact, he led every lap only to be edged out by Joe Kopp at the line.  Last year, Wiles was edged out yet again in The Buckeye State.  This time it was Sammy Halbert and his Harley Davidson who narrowly got the best of him and his Ducati.  One would expect Wiles and his Lloyd Brother Motorsports/Ramspur Winery Harley-Davidson to be more determined than ever as he will be reeling for that number one spot.
The Lima Half-Mile is definitely a race you don't want to miss.  Reserved tickets are $30 in advance and $35 at the gate. General Admission tickets are $25 in advance and $30 at the gate.  Children under six are free.  Tickets are available by calling 419-991-1491 or can be purchased at all Lima motorcycle dealers.
For more information, go to www.ohionationalchampionship.net.
About AMA Pro Flat Track presented by J&P Cycles:

AMA Pro Flat Track presented by J&P Cycles is a national motorcycle racing series in North America and is considered one of the oldest forms of motorcycle racing.  Sanctioned by AMA Pro Racing, the Series is highly regarded as the most competitive form of dirt track racing in the world.  The 2013 schedule consists of rounds on the country's finest flat track courses.  For more information on AMA Pro Flat Track presented by J&P Cycles, please visit http://www.amaproracing.com/ft/.
Posted by Stuman714 in Indy at 5:22 PM