Stu's Shots & AMA Pro Flat Track Take a Final Look Back at the Springfield Mile II, Round 13 of the '12 Season Heading Into Tomorrow's Santa Rosa Mile 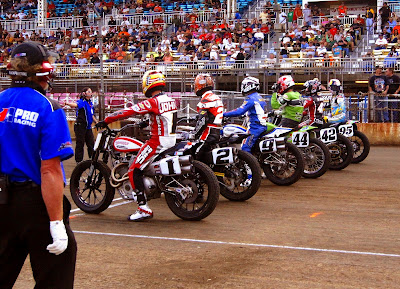 The 2012 running of the Springfield Mile II finally gets ready to roll off the warm-up line after a two-week delay negated by the remnants of Hurrican Isaac that virtually drowned-out the event's normal running during the Labor Day Weekend.  Reset to two weeks later and you couldn't have asked for better weather for the last Midwest race of the year at round 13 of the 2012 AMA Pro Flat Track Harley-Davidson Insurance Grand National Championship presented by Motorcycle-Superstore.com season.

Each of the six men on the front row of the Springfield Mile II got there via their 1-2 finishes in their respective heats throughout the day, with JD Beach, Bryan Smith and Brandon Robinson all scoring wins for the first-ever time that Kawasaki had won all three heat races at a Grand National Twins Series event in the series' over-60 years of competition, helping to slowly close the door on the Harley-Davidson XR750 dominance seen throughout the better part of it's over 40 years of existence on the flat tracks of America.

Each of those three men, however, raced clean and hard against three of the best XRs in the business in the hands of Jake Johnson, Kenny Coolbeth, Jr. and Jared Mees, and all six also competed in the Dash for Cash event that saw Smith again take the #42 Crosley Radio/Howerton Motorsports/Eaken Racing/Guts Wear-backed Kawasaki to the win for his 3rd Dash event win of the season for the Indy Westside-based team.

As everyone well knows, Smith also led 20 laps in the 25-lap National main to take the win over Sammy Halbert by just .041 seconds, with Mees on the #9 Rogers Racing/Blue Springs H-D/Saddlemen/National Cycle-sponsored XR coming home in the 3rd-place spot to add a point to his overall lead in the AMA Grand National Championship by 12 points.

That 12-point difference goes to 2-Time and defending AMA Grand National Champion Jake Johnson who led four of the first five laps on the mile oval at the Illinois State Fairgrounds.  Jersey Jake fought like the true champ he is and has been on the #1 Zanotti Racing/Schaeffer's H-D/Boughner Racing Suspension/Arai-backed XR to end up in the 5th-place spot in the National main, after a great finish of 2nd to Smith in the Dash.  If not for coming together with defending Springfield Mile winner Willie McCoy on the last lap Johnson very well could have been in the top-3.

Kenny Coolbeth, Jr. on the #2 Screamin' Eagle/Harley-Davidson Motor Co/Fox/Arai Helmets-backed factory XR was seeing just his second race back after his return at the Lucas Oil Indy Mile in August after his late June leg injury suffered at Lima.  The King of Cool pulled out a great 6th-place finish on the day in the main and also gained two points for his 4th-place finish in the Dash to work his way back into the top-10 in the championship battle after missing several rounds recuperating, including the previous night's short track in which he elected to sit out to further heal his injured leg.

The other two lightning fast Kawasakis also put on a great show at Springfield, with both men shining on their respective 650R Ninja-based parallel twins.

Brandon Robinson is having a great career resurgence on the #44 Werner-Springsteen Racing Kawasaki/Sponseller/Arai/Derbi Ridge Salvage-backed rocket.  Having come within a half-wheel length of winning the Lucas Oil Indy Mile only to lose to Sammy Halbert, BRob44 also has another top-5 this season after a 4th-place run at the Sacto Mile in late July.  Winning his heat at Springfield and ending up with a solid 9th-place finish in the National main should let everyone know that the popular and friendly Pennsylvania resident and former Expert Twins Champ is finally healed up from his 2009 knock out of the park at Indy and is going to be a force to be reckoned with soon.  It also further shows that legendary team owners Bill Werner and Jay Springsteen still know talent and have a great knack for putting it all together this year along with the addition of '09 Rookie of the Year Stevie Bonsey to their line-up.  Let's hope this one stays pat for next season and we can see this team really come together and gel and get the W-S Racing bikes back on top of the box where they and the two fine young men riding for them deserve to be.

After competing in the AMA Pro GoPro Daytona SportBike Series Championship round at New Jersey Motorsports Park the previous weekend, JD Beach had the weekend off from his 'full time' job in the AMA Pro Road Racing ranks to hang his leg off of the #95 USC Racing/Red Bull/Bell Helmets/Alpinestars-sponsored Kawi.  After a 6th-place run in the previous night's short track, Beach won the fastest heat of the day on the mile, took 5th in the Dash and ran up towards the front all day in the 25-lap National main to card a superb 4th-place finish for what could be his best-ever effort on a Twins Series machine.  We hope to see much more of this fine lad as he brings another heightened level of excitement and vitality to The Rolling Thunder Show.

With the final race in the Midwest now in the back pocket, the stars and heroes of The Rolling Thunder Show head to The Santa Rosa Mile, the final Twins Series mile oval event before wrapping up the year on the Tucson and Pomona half-miles in the following successive weekends.

Will the Smith-ridden Crosley/Howerton/Eaken rocket again be able to hold off the XR brigade on a track that will make all things equal for all of the teams in attendance since the series hasn't competed there in over four and-a-half decades, let alone the difference in the track surface?  Or will one of the other Mean Green Machines pull it out for their first win of the season or career?

The Crosley/Howerton team wants to win this one more then ever if for no other reason to pay homage to recently-deceased engine mastermind, Skip Eaken.  That in itself could see the team take it's record-tying 3rd win of the season in just their first-full season together.

Only time will tell, and very little of it at that as practice rolls off at 1:15 EDT/10:15 PDT on Sunday, with the Grand National main event's 25-lap feature set to run at 7:00 PM EDT/4:00 PM PDT at round 14 of the 2012 AMA Pro Flat Track Harley-Davidson Insurance Grand National Championship presented by Motorcycle-Superstore.com season.  Whether you're in or out, you better strap in as The Rolling Thunder Show hits the track for one of three remaining rounds in the season and the action is surely going to get hotter and heavier then ever!

You can read the full press release below from the Springfield Mile II event, courtesy of the great crew from AMA Pro Flat Track, while you get ready for tomorrow's great event in Sonoma County, California.